Sunday October 25th - this month’s field outing will visit a section of lower Crystal Creek (below Paradise Lagoon but above the highway)  which we will be accessing by Lound Road, Mutarnee. For further details, directions and a map, please click here. This will be a morning trip but anyone wishing to stay longer can do so.

Our August and September outings were well attended, and in each case visited somewhere we have not been before. Click on this Bindal Ridge link to read the report of our August outing and on this Cape Cleveland link for the September report.

Monday October 19th – Sunday October 25th:  Also coming up soon is the Aussie Backyard Bird Count, organised by Birds Australia. Click here for details of how to register. If you don’t have a backyard, or prefer to choose another spot (local park, beach, patch of bushland) that’s fine. For the purpose of this count your backyard is “any place where you feel at home and can see birds”. You can make as many counts as you like over that period, but each one should be just 20 minutes in length. If you can only do one count that’s fine but if you have time to do more (perhaps mornings and evenings, or counts in varied locations) that’s fine too. Remember that this count records not just species but numbers of a species, ie 1 penguin, 5 cassowaries (OK, only kidding). 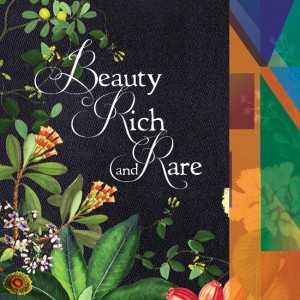 Current until Tuesday 27th October: Running alongside the modified North Australian Festival of Arts (NAFA), Beauty Rich and Rare recreates the wonder experienced by Joseph Banks and the botanists, scientists, and illustrators who travelled on the HMB Endeavour from England to Australia 250 years ago. This vibrant, 20-minute digital work of art showcases our unique flora and fauna and  conveys a sense of the awe with which many early European visitors regarded this strange new land – which has been so abused and so taken for granted ever since.This is a FREE event, running daily from 10am-6pm at The Ville but, to keep it Covid safe, you need to reserve tickets. More info and bookings here. My only regret was that it wasn’t at least twice as long.

Friday November 13th: Coming up next month is NQCC’s annual fund-raising Trivia Night. Trivia 2020 is going to look a little different to previous years, but organisers are keen for it to go ahead and from past experience it is always a fun night. Due to COVID-19 restrictions, numbers will be strictly limited, so be sure to add the date to your calendar and book your tickets as soon as they become available! We will advise you. 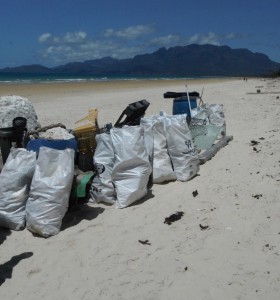 Some of the 50 bags of rubbish. DS photo.

Hinchinbrook Clean-Up: Tangaroa Blue’s Hinchinbrook clean-ups have again proved popular. Our president, Denise, travelled up to Cardwell for one of four clean-up days on the island’s Ramsay Bay, and reported as follows:Hinchinbrook was magnificent. Perfect weather, calm sea, lovely people. There were twenty-six volunteers, including members of the Cassowary Coast & Hinchinbrook Branch. On a short strip of a lovely clean-looking beach, we picked up 1.3+ tonnes of rubbish: 50 full bags plus a pile of big stuff, wheels and tyres, parts of ships etc. Incredible. There was also a tide line of impossible to pick up microplastics. She asks how can we stop the mountain of rubbish coming off land? Every flood puts so much into the sea apart from all the other causes – and I am reminded of the huge chunks of polystyrene (from destroyed pontoons) that swept down the raging Ross River in February 2019. Because of their size (and gleaming white colour) they could hardly be overlooked, and perhaps some were retrievable, but how shocking it is to contemplate the toxic impact the human species has on all others.

A slice of good news? If this fills you with despair then you may be able to recover a little hope from this Guardian summary of a major scientific review published in Nature a few months back. Without minimising the threats or outrages in any way, it does point to the positives that have been achieved, including: the increase in sustainable fishing, near cessation in the destruction of mangrove and seagrass areas, rising populations of a number of marine species, greater international cooperation – which gives rise to hope that the goal of restored and recovered oceans and ocean habitats by 2050 can be achieved.

Everything but the kitchen sink? Some of the larger items collected at Ramsay Bay. DS photo.

Getting it right on National Parks: Over recent years there has been some intense debate about the purpose and use of our National Parks. The trend to view them as primarily places of human recreation (and income generation), under the guise of “ecotourism”, rather than for the protection of natural and cultural values has deeply worried many of us.  The National Parks Association of Queensland (NPAQ) has produced a clearly stated policy on what are and are not acceptable human activities in our protected areas which we have reproduced in our post National Parks- how should they be used?

Avian odyssey: How extraordinary are our migrating birds? While humans across the globe have been effectively grounded for the last 7 months, a bar-tailed godwit has been logged as completing the longest non-stop bird flight ever recorded, travelling over 12,000 km, from Alaska to New Zealand, in 11 days. First tagged in NZ in late 2019 the bird would have set off in March 2020 to return to the northern hemisphere, by a different route, just when most human journeys were brought to a halt. But on 16th September it left the Alaskan mudflats for its long flight south over the Pacific. It is believed strong easterly winds prolonged its journey by pushing it towards towards Australia, before its remarkable “on board” map allowed it to correct course and arrive at its destination: a bay near Auckland.

Avian conflict and congress:  Back in July I reported on the bower-building activity that was going on in my garden, and the repeated attempts by a rival bird to tear down the structure and steal the decorations. Sad to say, the aggressor won and all that remains three months later is a sad little pile of sticks. Meanwhile, last month we witnessed another sort of conflict between two kookaburras, which has now been posted on Malcolm Tattersall’s excellent Green Path blog. You can read it here.  And last week our secretary Beth, gave this account of a different type of interaction in her own garden: This time each year I usually get a female koel coming to drink at the bird bath, so I wasn’t surprised to see one sitting on the branch above the bath. She seemed to be checking the lay of the land before dropping down to drink, so I kept watching to see what she would do.  However, I really was surprised when a male appeared from nowhere and proceeded to mate with her!  I guess some poor, unsuspecting bird is about to lose its eggs…. 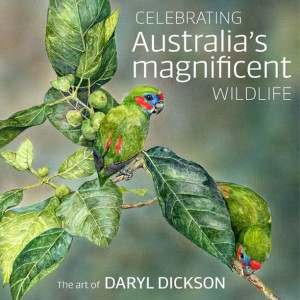 In bookshops now ... last month we gave advance notice of a forthcoming book by north Queensland wildlife artist Daryl Dickson, Celebrating Australia’s Magnificent Wildlife. The good news is that the book, which would make a wonderful Christmas gift, appeared in bookshops this month. Mary Who bookshop quickly sold out of their first batch but should have received new stock by the time you read this. A full page review in the latest issue of Wildlife Australia declares the book features “some of the most evocative and intricate artworks ever produced on rare Australian species” and admires the way Daryl recounts the personal tales behind  each work while also highlighting the animal’s scientific wonders. In marketing terms, this lovely book is surely “a steal” at just $55!

Our final committee meeting for 2020 is scheduled for Monday morning 2nd November. Non executive members are welcome to attend but please let us know in advance if possible.