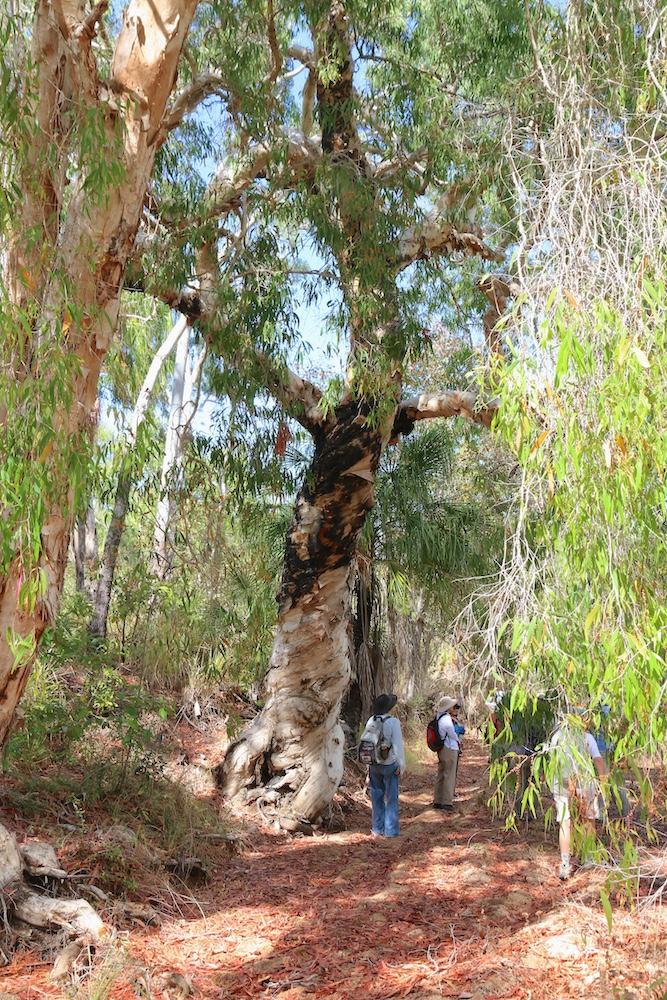 The creek has no sign with its name and no one has tracked down a map with it named, but it is a small one on Cape Cleveland a few km south of the AIMS gate. Fifteen people arrived where the AIMS Road crosses over it so we could wander down the dry sandy bed to the mangrove zone. It was an easy and mostly shady walk. Despite guinea grass covering the top of the banks, the creek ran through eucalypt woodland with bloodwoods and Eucalyptus tereticornis often leaning over it, and the trees and shrubs growing in the creek bed and along the banks were an interesting assortment of natives not weeds. 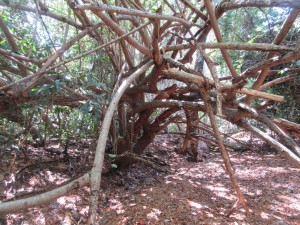 Melaleuca leucadendra were the largest and oldest looking trees, though there was a huge sprawling Hibiscus tiliaceous that made the ones usually seen in local beach scrub look stunted. One of the joys of the walk was that there was no rubbish scattered around. Not far from the road someone noticed that one of the M. leucadendra had an occupied sunbird nest high up.This was one of the few birds actually seen, though more species were heard during the morning. Yellow-spotted honeyeaters were calling fairly persistently but were elusive to the eye until the return journey when a pair were seen busy in a small tree on the bank which also hosted a little shrike thrush.

A common nobbi, Diporiphora nobbi, and a very fast skink were the only other wildlife seen, except for the beautiful yellow caterpillars of the Four O’clock Moth. There were many Carallia brachiata growing and a number of them had the caterpillars. Their bright colour makes them easy to spot and attracts photographers. 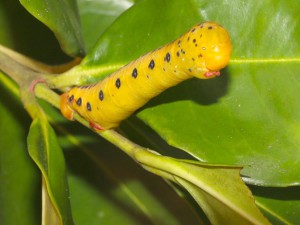 Plants were the main attraction. A delicate maidenhair fern adorned rocks along one section of bank and there was one fairly nondescript-looking shrub sitting on the sand, Corchorus hygrophilus (native jute) which is considered rare and threatened. It usually grows among rocks. Will this plant be washed away when the creek floods during the wet or will it cope with living dangerously?

Although the creek was completely dry when we walked it, making for easy walking along the sandy bed, the undercutting of the higher banks showed how fast and deep it must run after heavy rain. 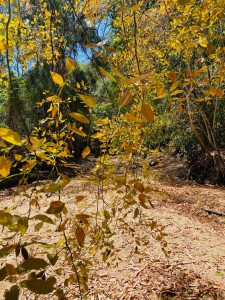 The healthy Millettia pinnata had their brilliant new growth but a number of these trees had no leaves and had suffered an extreme insect attack. The native olive Chionanthus ramiflorus and the white cedar were fruiting, though the taste of the former was not appreciated by the brave soul who tried it.

In some parts, thick vines hung down from the trees. These were Entada, Matchbox bean, and burny bean Macuna gigantea. Some of us had been picking up fragments of the seed pods of the Matchbox bean, not knowing what they were until we noticed the the long pods dangling overhead.The green flowers of burny bean were hanging close to the stream bed. Further downstream patches of the banks were gallery rainforest, though we did not divert to explore them. That might be something to do in the future. 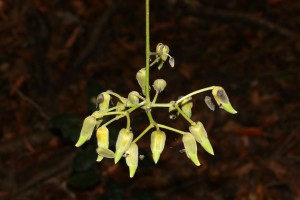 Finally we reached the edge of the mangrove zone and the creek bed became diffuse. Holly mangrove, Acanthus ilicifolius, and the attractive mangrove fern, Acrostichum speciosum, was growing there, while Bruguieria was the dominant mangrove tree. Unwilling to explore further into the mangroves, we turned back.