Elliot Springs is a fairly recent sub-division forced onto bushland on Townsville’s southern outskirts. Bindal Ridge seems to be the developer’s name for the low hills behind the residential area, not called that by the Bindal people themselves. However given many developers’ tendencies to use cringe-worthy names, Bindal Ridge is a reasonable choice. A walking track just over 2 km long runs from a park/playground to the top of the ridge. There are also mountain bike tracks in the area and walkers and bikers are kept separate, thankfully. 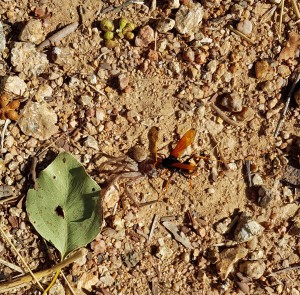 Fifteen people turned up for the outing, most of whom had never been there before. Before even reaching the gate at the bottom of the track someone kindly waiting for a latecomer noticed a wasp on the ground trying to drag a huntsman spider along. It was having some difficulty, the spider kept getting snagged or was too heavy.

Eventually the wasp just flew off, abandoning the spider. Spider wasps are solitary and hunt and paralyse spiders for their larvae to feed on. This one, Cryptocheilus bicolor (aka Heterodontonyx bicolor), found throughout Australia, digs a burrow in soft soil and stashes the spider inside then lays her eggs on it. The larvae hatch and eat the spider before metamorphosing into adult wasps. This wasp is regarded as having the most painful sting of any Australian plant or animal – according to molecular biologist Dr Sam Robinson who, in the interests of science, has allowed himself to suffer hundreds of non-lethal stings. He described the impact of this wasp-sting as “shockingly powerful”. 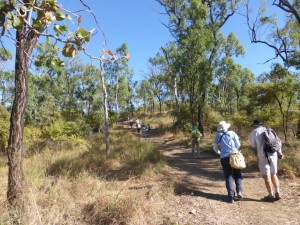 Along the track. Photo M.Flecker

The gravel track has a fairly gentle gradient so no athleticism was needed, but for the weed-phobic among the group the presence of so many chinee apple trees (Ziziphus mauritania) beside the path tended to accelerate heart rates a bit. This thorny introduced pest still covers large areas of degraded bushland around Townsville. It was supposedly introduced by Chinese settlers in the 19th century, then spread widely by thousands of roaming goats as well as native mammals and birds (and children) who ate the fruit. Some years ago we found Rufous Bettong at Black River were eating them. 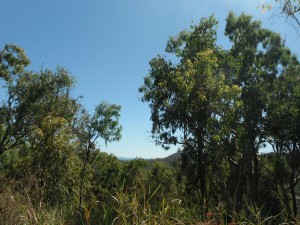 When one looked up past the chinee apple understory, there were plenty of native trees: lots of ironbarks and poplar gums, and further along bloodwoods and tesselaris. Less common were sandpaper figs, Alphitonia and Euroschinus, the latter standing out with bright green foliage among more muted greens. In among the introduced grasses and wild passionfruit vine, patches of kangaroo grass were surviving and Dianella was flowering.

Stragglers who had fallen behind the rest of the group were assured by those returning that the view at the top was wonderful, with landmarks on Hinchinbrook Island visible. But by the time we got to the top the view out to sea was hazy because of fires burning on Magnetic Island, though the Townsville urban sprawl and that vital addition, the new stadium, could be clearly seen.

Townsville from the lookout. Photo S.Smith