WELCOME: A warm welcome to our first new members for 2020, Tara who joined in January and Sid who signed up in February. We hope we can keep you interested, informed and – dare I say – inspired throughout the year.

CANCELLED !! SUNDAY 22nd MARCH 1.45 pm: MARCH FIELD TRIP: After a washed out February outing, we will hope for better this month – fingers crossed. To take advantage of the low tide at 2.40pm and avoid too much midday heat we plan to take an afternoon walk along Bushland Beach – meeting at the park at the very end of Mt Low Parkway. “Bushie Beach” is known for its gatherings of waders and, while we are near the end of the season for the summer migrants, we hope there may still be a few around and/or other interesting sand and mangrove dwellers.

CANCELLED !! THURSDAY 26th MARCH: CLIMATE UPDATE TOWNSVILLE  5.30-7.30pm. Co-hosted by James Cook University and the Australian National University, Climate Update Townsville will present an overview of how our climate is changing, and how we can respond to these changes. This FREE event will be held at JCU, specific lecture theatre to be advised.

STILL HAPPENING – but please read carefully: SUNDAY 29th MARCH: TOWNSVILLE BRANCH AGM 1.45 pm: Provided we can get a quorum this is still going ahead at a changed venue with restricted numbers.  Please DO NOT attend without contacting us as we need to comply with the social distancing requirements announced recently.  Members are still invited to return the proxy form which was emailed last week. If you are uncertain of your membership status, please email us. Reminders have gone out to all whose memberships became due or overdue on or before 1/3/2020. 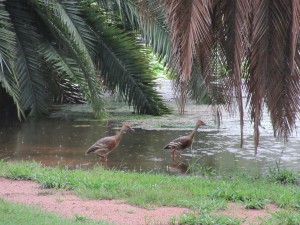 FEBRUARY OUTING ~ WET, WET, WET! A dozen of us gamely turned up at the Palmetum with raincoats and umbrellas for the first walk of the year –  but before long we were dashing for cover in the cafe as the heavens opened.  Before the downpour we managed to walk through the rainforest area, beneath the small ibis colony with nests and young. In the clearing a large nesting/roosting box was noted in one of the trees (presumably for  barking or rufous owls). Some botanical discussions were held here while three of us ventured as far as the first lagoon where we saw a greater egret, stretching its enormously long neck, and several plumed whistling ducks. At least we had the chance for a social catch-up over coffee and cake – so it wasn’t all bad!

NO RELIEF FOR FLYING-FOXES: Hinchinbrook Shire Council’s determination to proceed with dispersal of a flying-fox roost in Ingham’s botanical gardens during a period of extreme heat caused alarm to WPSQ branches, wildlife carers and flying-fox advocates. Flying-foxes are known to be vulnerable to temperatures above 38°C, which can induce heat stress and death, sometimes in large numbers. The actual and forecast temperatures in Ingham ranged between 38°C and 43°C. Our pleas, and the advice of the Dept of Environment & Science, for Council to postpone the actions for just a few days until temperatures dropped, were ignored. This was even more disturbing given that a number of the highly endangered Spectacled Flying Fox species were in the roost.

This action coincided with publication of the revised Queensland Government guidelines and codes of practice for roost management, which specifically warn against dispersing roosts at times of high vulnerability, including heat stress. Sadly, the fundamental weakness of these guidelines is that compliance has not been made mandatory and ignoring the recommendations carries no penalty. Meanwhile, Cairns Regional Council is still seeking Federal approval to disperse a colony of the endangered “Speccies”, despite the 2018 mass death from heat-stress event and their dramatic population decline in the last two decades. Will we never learn?

MAHOGANY GLIDER MEETING: Five members travelled up to Tully early in March to attend the first meeting of the Mahogany Glider Recovery team for 2020. Chaired by Suzie Smith from WPSQ Cassowary Coast branch, participants came from state and local government as well as community, indigenous and conservation groups. Mammalogist Dr Steve Jackson, involved in glider research for over 25 years, came up from NSW, and representatives from other agencies took part via phone hook-up.

We were pleased to hear from PowerLink that they will attempt to remediate some of the damage that was done clearing and poisoning a large area of vegetation along the easement that runs through the Ollera property, creating a ‘barrier’ too wide for gliders to cross safely.  We would be happier still if they took up our invitation for an onsite visit to discuss what will and won’t work. It was also dismaying to find that the desperately needed update of the Recovery Plan is still so far from completion – through no fault of the team which has worked so hard to get it finalised, approved and in place. Despite such problems it is heartening to have so many groups and individuals working together towards a common goal of giving this rare and threatened animal a decent chance of survival.

WATCHING THE REEF’S HEALTH:  If you want to know what’s happening on the Reef along its whole length, it’s worth checking the regular Reef Health bulletins issued by GBRMPA’s chief scientist, Dr David Wachenfeld. Each bulletin consists of a short video in which David presents the latest observations and recordings and interprets and explains what they mean for the health of the reef. It’s not necessarily a pretty story but, especially for those of us who are non-scientists, it  is delivered with remarkable clarity.

It is alarming to learn that, in February 2020, sea surface temperatures along the reef were the highest ever recorded since records began in 1900. The next 2-4 weeks will be crucial in determining the extent and severity of bleaching caused by these temperatures and aerial surveys will begin next week. We can at least be thankful that recent cloud cover and rain, and the presence of the tropical low off the coast, has brought some relief from those extreme temperatures.

AFTER THE FIRES ~ SURVIVORS AND CONCERNS: Amid all the despair and anxiety, here are two good news stories (and one reality check).

Hooded plovers: A couple of days after the New Year’s Eve fire in Mallacoota, birds began to wash up on the beaches. But a month later a Birds Australia member discovered a small miracle: a family of endangered hooded plovers, parents and two chicks, happily foraging on the beach. These birds are in decline as eggs and chicks are routinely taken by dogs and other predators or trampled by holiday-makers.  Yet despite the intense heat and choking smoke of those terrible days, these parents had stayed at their nest, incubating the eggs and enabling the chicks to flourish. Sue Hines, who recounts this story, describes it as “a symbol of great optimism against almost insurmountable odds.” You can read more here and, if you wish, can donate to help fire-affected bird species here.

Wollemi pines: As the bushfires eased in NSW, a remarkable story emerged of the courageous efforts made to save the only remaining stand of this rare and ancient tree, Wollemi nobilis. Related to others in the Araucaria family (hoop pine, bunya pine etc) it was first discovered by NSW Parks ranger, David Noble, in 1994, growing in just one gorge in the Wollemi National Park north of Sydney. When the massive Gospers Mountain fire took off these ‘living fossils’ faced annihilation. The full story of how they were saved was published in The Australian (and is behind its paywall) but you can watch this 4-minute video and James Woodford, author of the book describing the pine’s discovery, has this piece in the free-to-everyone Guardian. 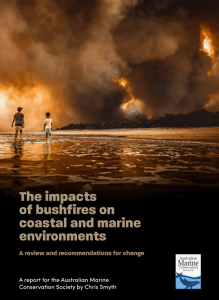 And the oceans also suffer: We are all painfully aware of how the bushfires have affected such huge numbers of wildlife, wildlife habitats and land-based eco-systems. We also recognise how those impacts have (literally) spilled into our water-courses and wetlands especially in areas that have received large amounts of rain. But how many of us thought about how our oceans and marine life would be affected? A report from the Australian Marine Conservation Society on the impact of the 2019-20 bushfires on marine ecosystems warns that the full effects may take months to materialise.These impacts come from the nutrients, ash and debris which find their way into our oceans, harming wildlife and overwhelming mangroves, seagrass beds and inshore reefs. Contaminants released by the fires are also likely to affect the physiology and behaviour of marine life, and to find their way into the food chain. You can read the full report here.

EASTER IS COMING – BUT WHERE ARE THE CHOCOLATE BILBIES? Last year Cadbury’s abandoned its commitment to support the bilby fund through the sale of its chocolate bilbies. Luckily the Australian-owned company Pink Lady stepped up to the mark and produced the popular chocolate marsupials, with a percentage of profits committed to the bilby cause. Pink Lady bilbies are in production again this year but the big supermarket chains are not stocking them!  Coles and Woolies need to be encouraged to change their minds, stock their shelves with bilbies not bunnies, and help protect one of our highly endangered species. 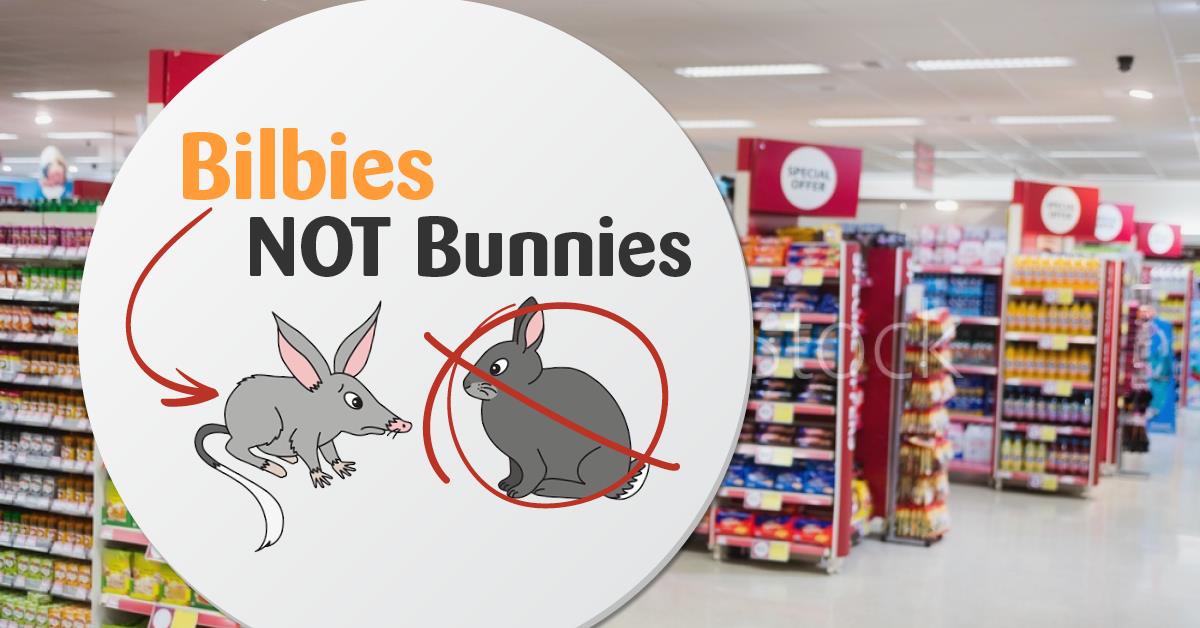 Image from Save the Bilby Fund: https://savethebilbyfund.com

That’s all for this update – please maintain your care for our environment and unique wildlife, while also staying safe and healthy yourself. Should government requirements or plain common sense require any changes to our activities to prevent further spread of the COVID-19 virus, we will let you know.