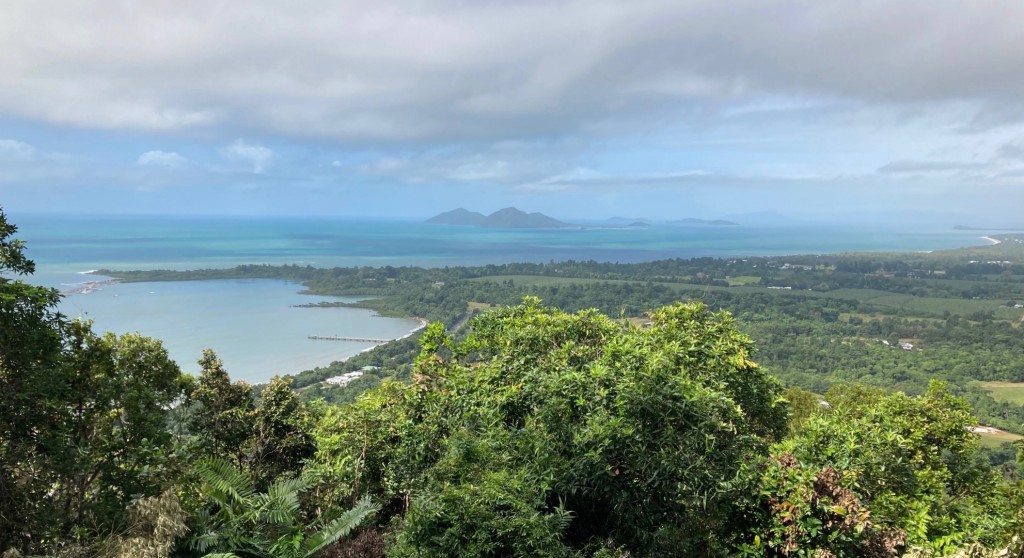 Four Townsville branch members travelled up to Mission Beach recently to share a walk with our friends in the Cassowary Coast-Hinchinbrook Branch – continuing the idea of joint walks (when possible) fostered by the late Suzie Smith. The plan was to climb Bicton Hill, part of the Clump Mountain National Park in Djiru country.

The day started well for two of us with a close-up cassowary sighting as we drove in from the highway. Although it was concerning to see how nonchalantly this magnificent bird ambled across the road from one side to the other (and back again) it was good to note that all approaching traffic slowed their speed to a halt or a crawl, some turning hazard lights on as additional warning. Sadly too many birds still lose their lives to less considerate drivers. 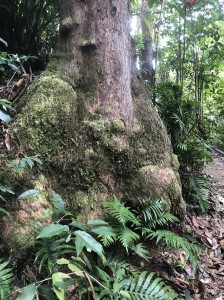 The  Bicton Hill circuit track is approximately 4km long and popular with visitors and locals. There were already several cars parked at the starting point before our group assembled at 10am but once on the track it was never crowded and there was no awkward jostling when we met other walkers! It was beautiful to be walking through this lovely example of lowland rainforest that has all but vanished elsewhere, in such perfect, cool conditions and without the hint of a mossie or even, as far as I know, a leech! We should not forget that, nearly 60 years ago, it was these rainforests that enthralled artist John Busst, filled him with a passion to protect them, brought a unique partnership with the pioneering ecologist Len Webb and sparked what eventually became a national campaign to save the rainforests of the Wet Tropics.

The memory I had of this walk being a steep climb proved false. Either the track has been realigned (unlikely), my fitness has improved with age (even less likely), or my memory has declined over the last decade and a half (almost certainly!). In fact the track zig-zags quite gently up the slope, following the contours, and it’s only near the summit that a more vertical section leads to the look-out. It was certainly worth the little bit of extra effort to reach the highest lookout point with a splendid view south over coast and islands. 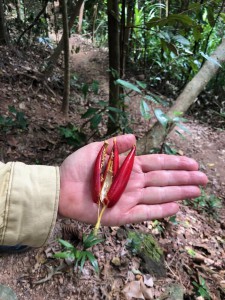 The amazing diversity of plants existing in our rainforests is long-established but, not being a botanist, I will only note some of the plants that caught my interest and for which I could be confident of identification. First to catch our attention, even before we set foot on the track proper, were the glossy green leaves and rich red-brown papery bark of Dillenia alata (aka Red Beech or Golden Guinea tree); its gorgeous golden-yellow, red-centred flowers will come in a couple of months. On the ground as we walked we could hardly miss some scarlet seed-pods fallen from the Lacewing vine, Adenia heterophylla, split open to reveal the seeds inside. Bill and Wendy Cooper’s Fruits of the Rainforest helped to ID this one, with later confirmation from Russell Cumming. Thanks, Russell!

Among the taller trees was a favourite of mine, the Brush Box (Lophostemon confertus), distinguished by its bulky lower trunk with pinkish bark and a green overlay of moss. As we descended, someone’s sharp eyes found the unusual Balanophera fungosa or “fungus root”, actually not a fungus at all but a parasitic flowering plant that grows on the roots of trees. (You can see a clear photo and read a description of this strange plant in this account of a walk we did on the Dalrymple track a few years ago). Near the bottom of the track Helena picked up some fallen bright yellow flowers from a Golden Bouquet tree, Deplanchea tetraphylla. 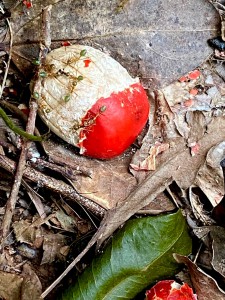 Information about this walk on the DES website refers to two uncommon plants found near the summit, the vulnerable Arenga palm Arenga australasica and the Hope’s cycad Lepidozamia hopei. Having not read this until the following day I didn’t look for the palm but we did see two fine specimens of the cycad and were impressed both by their incredibly hard and knobbled trunks and their height – according to WTMA this is the world’s tallest cycad and can reach 20m.

Daryl’s photo at left shows one of the seeds which would have split off from the cone of a female tree, still with some of its fleshy red covering or sarcotesta (a new word for me!) and covered with green ants – but don’t be tricked into thinking the ants are feeding on this. As I was later reminded, green ants are predominantly carnivorous predators and what they are actually doing is preying on a different species of ant  (a black one is just visible if you click and enlarge the photo), and possibly other insects, that are attracted to the red covering. Musky rat-kangaroos will chew on this and white-tailed rats eat the seeds. 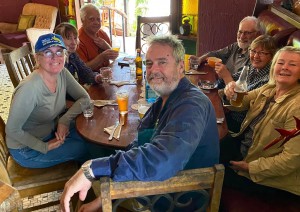 After our exertions, eight of us enjoyed a most convivial lunch at the delightful Bingil Bay Cafe before emerging into a cloudburst!! A dramatic end to a very enjoyable excursion in excellent company. Special thanks to Lisa for organising and Daryl and Kerry for extra photos.

The CC-H branch have three more walks planned for the year, at which Townsville members are welcome.

NB Click to enlarge photos. Please note that copyright of all images in this post resides with the photographers. Pease contact us for permission to use.