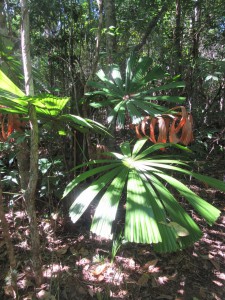 The fan-like Licuala palms are found along the track

July is a very busy time of year in Townsville, and we hadn’t given members a lot of notice of our planned walk, so it was not altogether surprising that only a small number turned up at the start of the Dalrymple Track, south of Cardwell. Nonetheless it was a perfect, cool morning for walking, especially on a track that ascends steadily, and at times steeply, for approximately 2kms. This was the first time I had done this section of the walk since Yasi smashed into the forests along this coast so it was wonderful to see how well it had recovered in less than a decade.

There was plenty of shade, the track was mostly wide enough to walk two abreast with ease and the early creek crossings were accomplished with dry feet. So, with a few rests, it took about two hours to reach the stone-pitched bridge with brick-lined culvert near the ridge-top (longer for the botanisers!). This was the obvious place to enjoy our refreshments in the sun and ponder the history of the track constructed 154 years ago. Four of us ventured on a further 100m to reach the Dalrymple Gap, admire the tall stand of palms rising up from the creek valley and look down to where the track plunges steeply through the rainforest towards the first crossing of Dalrymple Creek.

Rufous fantails flitted and flirted beside the track, and calls were heard from a forest kingfisher, wompoo fruit-dove, varied triller, yellow-spotted honeyeater, brown cuckoo-dove, and both a whistler and a shrike-thrush, of which neither species was fully identified. 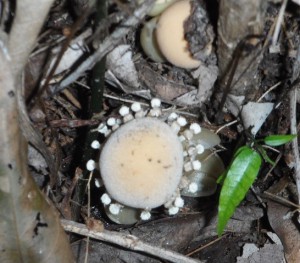 An intriguing find was the fungus-like plant, Balanophera fungosa. Not a fungus at all, this parasitic plant grows on the roots of rainforest trees. What looks like a small puffball is in fact part of the flower structure, which can be covered by thousands of tiny female flowers, while male flowers surround the base. The picture at left clearly illustrates the male flowers. A 2017 study found that several mammals (chiefly musky rat kangaroos, as well as native rat and bandicoot species) and at least four species of small honeyeaters, feed on these flowers. They must be either very tasty or very nutritious (or both) for these little birds to leave the treetops and put themselves at risk by coming down to  to feed on the forest floor. 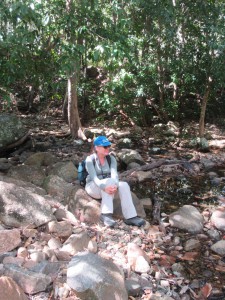 Alison relaxes at the end of the walk

A young tree with broad, heart-shaped to 3-lobed leaves, also caught our attention beside the track near the end of the walk and was later identified (thanks, Russell) as Aleurites rockinghamensis or Candlenut. When in flower, their white blossoms stand out against the green rainforest canopy. Yvonne Cunningham, who lives near the Moresby Range NP, has observed that the new leaves on the tree lose their chlorophyll and also turn white when the flowers appear, only reverting to green when the fruit sets. Is this to make the flowers more conspicuous to night-time blossom-feeders like flying-foxes? It seems likely.