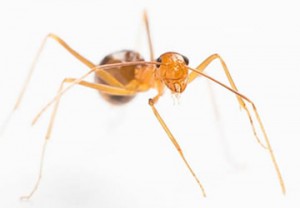 The invasive yellow crazy ants made headlines last month with another reported infestation on an Alligator Creek property, bringing the pests uncomfortably close to the National Park boundaries. This is the eighth infestation reported in the Townsville City Council area, others having been found at Black River, Douglas, Mt St John, Stuart and Nome.

Believed to have originally come from Africa, these ants (scientific name Anoplolepis gracilipes) threaten people’s property, domestic animals, crops and orchards as well having the potential to devastate wildlife species and seriously degrade biodiversity. According to CSIRO the ants are “one of the world’s worst invasive species [and] can form huge super-colonies containing thousands of queens and have worker densities reaching up to 20 million ants per hectare”.

The experiences recounted by the landholder at Alligator Creek – unusual behaviour by local wildlife and an eerie silence in the nearby bush (penetrated by the scream of a green tree frog covered with acid burns from the ants) – echoed those made by Cairns resident Frank Teodo in a video available on the Invasive Species Council website. Frank describes how the bush around him became silent and still when the ants invaded, and a waterhole usually loud with frog calls also fell silent, in stark contrast to unaffected areas. Mr Teodo has since become active in control efforts in the far north. Funding from the Wet Tropics Management Authority, aligned with vigorous on-the-ground work by the community, have helped to control and even eradicate many of the infestations in the far north, but constant vigilance and continued funding will be the key to whether this situation can be maintained.

While WTMA funding does not cover the Townsville area, other federal funding has been promised under the new government’s Saving Native Species program, to tackle infestations in both the Cairns and Townsville areas. It is to be hoped that new Minister, Tanya Plibersek, will release this money promptly so that we can continue to keep on top of these infestations.

If you observe a colony, do not disturb it or the vegetation around it but report immediately to TCC on 134810 or the Invasive Species Council.