2015 certainly saw some surprises (the state election result for one), many enjoyable times, some progress and positives, but still too many losses and negatives for our threatened environment and wildlife. Images of broadscale vegetation clearing on land and the latest devastating reports and pictures of huge areas of bleached coral reefs cannot fail to impress upon us the scale of what the conservation movement is facing.

Membership: While natural attrition takes its toll our membership continues to edge upwards and at the end of 2015 stood at 59, (33 individuals and 13 couples). We welcomed ten new members during the year.

Communication: 30 new permanent posts were published on the blog. This included all our trip reports and regular monthly updates. Other articles drew attention to the January state election, mourned the loss of conservation hero Felicity Wishart, exposed the failing support for injured cassowaries to our north, and urged action on the imminent loss of precious vegetation at Garbutt’s Mundy Creek. In addition to our members, updates are sent to two ‘friends and supporters’ lists with over 160 addressees. 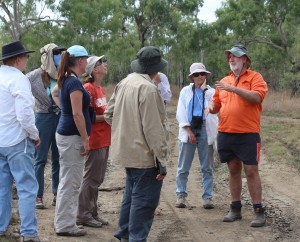 Field trips: 10 field trips were organised through the year, attracting non-members as well as members. Starting In February with a very hot walk at Oak Valley, we followed up with an energetic beach clean-up at Lower Crystal Creek in March – aided by some enthusiastic overseas students. We climbed Castle Hill, walked to Jourama Falls, visited Jerona (Burdekin) with guide Jon Luly, and linked human and natural history on the Dalrymple track. Our low tide walk, with guide John Collins, AIMS visit and riverbank firefly experience attracted large numbers, though only a few were able to make it to Mission Beach for BirdLife’s November pigeon count.  We are grateful to Jon and John for sharing their time and knowledge with us.

Delays over permit renewal disrupted the quoll-seekers program and only a handful of trips (all south of Townsville) were held. In the hope of being able to expand our wildlife searches to other areas, north and west of the city, an exploratory trip to locate a council reserve south of Ollera Creek, and to assess its suitability as a camera site, was made in July. Several cameras were purchased towards the end of the year.

Waterskiing on Ross River Dam: Our Lake Ross cruise in November 2014 made us aware that the waterski area had been enlarged to include a section of the river above its junction with the Dam. We expressed our concerns about the impacts on wildlife and received detailed responses, maps and assurances from the co-ordinator of Townsville Water. Although some of our concerns remain – such as the need for regular expert monitoring – there seemed to be not much more we could do, at least for the present. We would certainly oppose any further extension of the area, or granting of permits to additional groups.

Mahogany glider habitat loss: Early in the year we were alerted to unauthorised clearing of remnant vegetation (and mahogany glider habitat) on freehold land at Mutarnee – with apparently no action having been taken by the Dept of Natural Resources. We filed our own report, with photographs, with both DNRM and DEHP, urging the new State government to enforce its own legislation regarding such offences. We are still waiting the outcome of this investigation. Meanwhile ’for sale’ notices appearing on two blocks of similar land bordering the highway raised fears that more precious habitat could be lost. We have tried unsuccessfully to find a way of having this land acquired for conservation purposes.

Flying-fox management: We continued to work with the city council towards the development of interpretive signage for the Palmetum. It is a slow process but the cooperation between different sections of council has been encouraging. Liz and Dominique (from NQ Wildlife Care) attended several meetings and provided draft text and examples of signs used elsewhere. 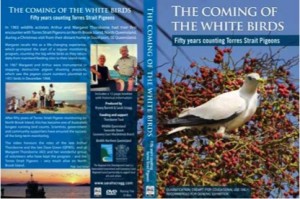 Pied Imperial Pigeons:  Our donation of $1000 towards the making of the documentary, The Coming of the White Birds, ensured the Branch had considerable involvement in this project. Liz took part in one filming trip to North Brook Island, and was able to contribute to the film’s content and comment on the initial drafts. In the absence of John Winter, Liz was invited to launch the film in Cardwell in September. DVD sales will help the Thorsborne Trust to fund future counts. Through the initiative of Suzie Smith, secretary of the Cassowary Coast & Hinchinbrook Branch, our two branches collaborated on a major article on the history and importance of the North Brook surveys, published in the summer issue of Wildlife Australia.

Submissions were made on the following:

Daryl Dickson’s photo was given to the Minister

The decision of the newly elected State government to hold a community cabinet session in Townsville at the end of March presented an opportunity too good to miss. We secured a time-slot with the new Environment Minister, Steven Miles, to discuss two important issues: flying fox management and mahogany glider conservation and habitat protection. Our small delegation included flying fox advocate Dominique Thiriet. Though the allotted time was brief, by sticking to the key points and preparing two short documents on each issue to leave with the Minister and his staff, we hope that we got our message across. If nothing else the Minister was made aware that there are some passionate people in the north who care about what is happening to our wildlife. The input and advice of Dominique on flying-foxes and of Daryl Dickson and Jacqui Richards from the Mahogany Glider Recovery Team was invaluable.

At the invitation of NQ Dry Tropics we held an information stall at the Celebrate the Sea Festival at Pallarenda in March. A very hot day and little shade did not encourage a large crowd but we still attracted reasonable interest and it was a good opportunity to meet members of other environmental groups. 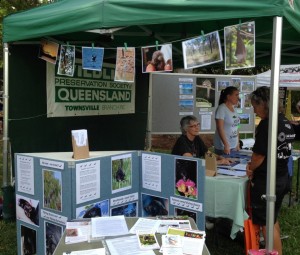 Our presence at Ecofiesta in May was even more successful than in 2014, thanks to a much more central position. As well as advertising our program of field trips, with photographs supplied by members, our display focussed on flying-foxes and mahogany gliders. It was surprising to find how little most people know about the latter, most being quite unaware that the gliders have been recorded within Townsville’s northern boundary. We were kept busy from start to finish, as money rattled into our donations tin, a large number of people signed up to receive our e-bulletins and took away literature, posters and copies of Wildife Australia.

Several members took part in Climate Action Day in November – with certain parts of our anatomy attracting media attention via the (in)famous “Heads in the Sand” salute, mark 2!!

Together with NQ Wildlife Care, NQ Dry Tropics and NQCC, we organised and hosted the Australasian Bat Society’s Bat Night in April on the banks of Ross River, attracting a crowd of around 90 people. This prompted us to collaborate again for a Palmetum Halloween party where a crowd of 130, including kids in batty costumes, were entertained and informed by talks from Ranger Dan and flying-fox expert Jon Luly.

In last year’s report I noted that we had “a new, if precariously balanced, state government” giving some hope that three years of assault on our wildlife and its habitat might be brought under control. Fourteen months on the government is even more precariously balanced and much of the hoped for action remains unachieved. While we can all enjoy and learn from our monthly outings and other nature experiences, we must never forget our responsibility, both as a group and as individuals, to keep advocating – with decision-makers and politicians of all persuasions – for good conservation policy, actions and outcomes. The challenge is to encourage those with the time, skills and knowledge to help us do this a whole lot better!