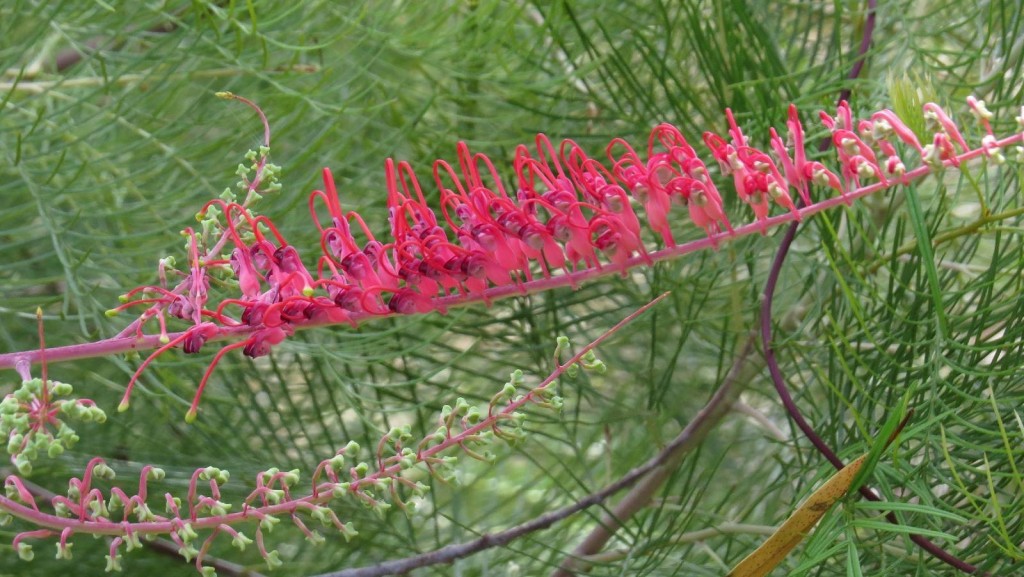 The expression “a walk in the park” usually describes an easy or straightforward task but the start of last month’s field trip to Anderson Park began with some confusion as we found the access to our planned meeting point compromised by works on the circuit road. Eventually all 17 of us managed to assemble in the same place and ran through a brief history of these really beautiful botanic gardens before setting off on our explorations. 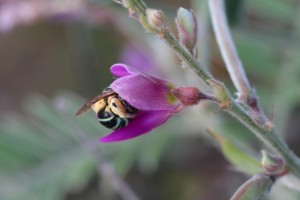 A blue-banded bee (Amegilla sp) gets down to business. Photo M Tattersall.

Anderson Park is the largest and the second oldest of Townsville’s three botanical gardens. It was named for Townsville’s first curator of Parks, William Anderson, who served in this position for well over half a century,  from 1878 to 1934. Clearly a remarkably dedicated man, he died the following year aged 90. The original land acquisition (in 1929) had formerly contained market gardens, sugar cane and a water well. Plantings in the park began in 1932 but large areas of the original land were over time absorbed by Mundingburra state school, a bowls club and road developments. Much of the present park land was acquired in the 1950s and 1960s and in 1962 the new superintendent of Parks Alan Wilson, a landscape architect, began the redesign of Anderson Park. You can read more of the history of the park here.

The park’s 20 hectares include some fine specimens of tropical trees, palms and pandanus, a collection of Cape York rainforest species and many other native plants from the dry tropics. The local branch of the Society for Growing Australian Plants (SGAP) became involved in plantings of native species between 1989-1991. 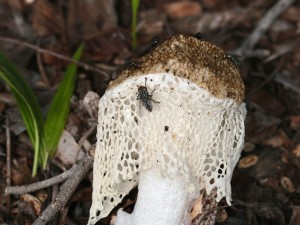 We began our walk by moving towards the rainforest section at the Gulliver Street end of the Park, on the way noticing the flesh flies (Sarcophagidae sp.) which gathered on the stinkhorn fungus Phallus indusiatus. Botanists were in heaven identifying everything from tall trees to ground cover, quite a few in flower. The signage system made this easier than it might otherwise have been and helpfully distinguished between native and exotics. We were surprised to find that a cassia which closely resembled the exotic “candle cassia” commonly seen in gardens and along footpaths, was actually a native, Senna magnifolia. A large Barringtonia asiatica gave welcome shade while the last of its delicate flowers lay at our feet and Beth drew our attention to the strange leafy “packets” hanging from the silk or native handkerchief tree, Maniltoa lenticellata which when open produce a cascade of creamy-white new leaves (see photos below). 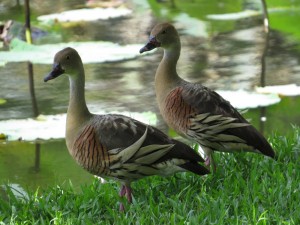 Moving on across the open area of the park brought us to the lagoons where most of the birds were: white ibis, magpie geese with young, black ducks and plumed whistling ducks were the most noticeable. Recent rain had obviously encouraged the royal spoonbill and striated heron, which had been hanging out there last year, to move on to more congenial habitat. A little distance away I was able to point out the three species of trees in the genus Cerbera, which are known for their toxicity. All have attractive flowers and C. manghas produces particularly attractive looking fruit, similar to a large red mango. Do not be tempted! Parks staff have undertaken to reduce the risk of these poisonous fruits being picked up by the unwary.

My thanks to Malcolm and Julia for the photos. Do take the time to view the full suite of Julia’s photographs here, along with species identifications. And do check out Malcolm’s Green Path blog for this exquisite and intriguing “nearly-Easter, nearly-Egg” photo and story. 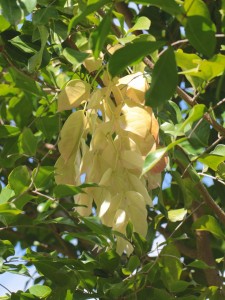 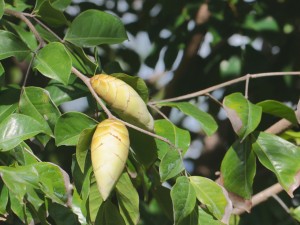