Welcome to new members: A special welcome to Michael, who some of us met on our Cape Cleveland trip last month, and to Helena and David who also joined in March.

Monthly Field Outings - Last month’s hastily re-arranged trip to the dry bed of the un-named creek on Cape Cleveland attracted 13 members and 3 visitors, including several who had visited it in 2020. Denise’s report has been delayed by computer problems but will follow. Our April trip is to the Woodstock area, lying off the Flinders highway and where reportedly there is good birding. Date: Sunday 24th April. Meeting place and time: Wordsworth Park (Woodstock’s only park) at 9am. Allow 40 minutes drive from Townsville (or 30 minutes from the Cluden intersection). Bring the usual requirements: water, snacks, sturdy footwear, hat, sunscreen. Please let us know if you plan to come and, if you need a lift or can offer a lift, please read the advice below.

A word about car-pooling in the COVID era:   While many in the community understandably remain both anxious and cautious about COVID transmission, we believe that anyone offering or seeking a lift to one of our walks, should feel comfortable in asking about the vaccination status of their potential ride-sharer(s) and, of course, in disclosing their own. By respecting individual situations and concerns in this way, everyone can make informed decisions about ride-sharing that they are comfortable with. Please also read our COVID-safe advice at the head of our home page.

Mutarnee camera trips resumed: Now that we are entering a period of calmer weather, our band of glider-spotters has resumed the trips to our camera site at Mutarnee, which had been suspended due to extreme heat and soggy conditions. If you are interested in joining one of these trips, learning some of the “whys and wherefores” and getting some hands-on experience in setting cameras for wildlife observations, please contact us.

AGM report: The branch’s Annual General Meeting was held on 27 March, with a quorum easily achieved without the need to rely on proxies (but thank-you to all those who provided these). Four members of the existing committee were re-elected unopposed, the fifth (your truly) has retired, a necessary but reluctant step, which means that there is a vacancy for anyone who would like to step up and play a part in running the Branch. Don’t be shy! The president’s report for 2021 was circulated to members prior to the AGM and is now available to read here. 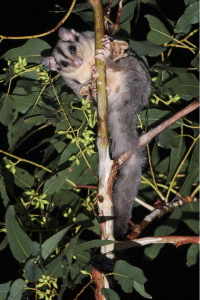 Finally!! Mahogany Glider Recovery Plan released: At last, after years of work, many revisions, public consultations and long months of waiting for ministerial approval, the renewed National Recovery Plan for the Mahogany Glider (Petaurus gracilis) came into effect last month. This is the third recovery plan for this animal, the first dating from 2000 and the second from 2008.

Recovery plans for our endangered species have a limited shelf life since significant changes can occur to an animal’s habitat, population, the threats it faces and the efficacy (or not) of current conservation measures. So, it has been far too long a wait to get this one up and running, but all credit due to those who have stuck at it and worked hard to make it the best that it can be – and in view of last year’s decision by the federal Minister to abolish many of these plans, we should perhaps be grateful that “our” glider still has one. Click on the link embedded in the title above to read the plan in full, either as a pdf or Word document.

Our Reef – still turning up the heat: In our last update posted on 11/03, we reported on the high water temperatures and consequent high stress being placed on corals throughout the GBR Marine Park. Two weeks later, after observing temperatures up to 4°C above average – the highest ever recorded since records began in 1900 and breaking the record set in February 2020 -  GBRMPA has now confirmed that 2022 has seen yet another mass bleaching event (the fourth since 2016). Bleaching has been observed across all sections of the Marine Park, and is at its worst in the Northern and Central sections where severe bleaching has occurred on both inshore and outer reefs. While bleaching does not automatically mean coral death, some mortality has already been observed and more in-water monitoring (especially at deeper levels) is needed to assess its extent and how well the less severely bleached reefs may recover.

Mt Elliott access….the long, long wait:  It is now 13 months since access to the Mt Elliott section of the Bowling Green Bay National Park was closed for a “major upgrade” to the day-use area – which effectively meant this whole section of the Park, including the creek, swimming holes and walking tracks to Cockatoo Creek and Alligator Creek Falls, has also been off-limits to the public. The re-opening, initially scheduled for last July was recently deferred for the third (or fourth?) time. However, we were pleased to receive a call last week from the Acting Principal Ranger for the Central Region who expressed his own frustration at the long closure, the reasons for which have not been of his making, or of the Parks Service either. While he warned us that the current re-opening date (31 May) may still be postponed, he did assure us that, from his own recent assessment of the site, the changes made to the visitor area have been done with great sensitivity for the natural surroundings. While he is aware that we remain unhappy about the loss of the camping area, he still hopes we will approve other changes. When the Park does eventually re-open, we should perhaps be making it the destination for a Branch trip ?

Some Good(ish) News: According to the Humane Society, Queensland’s new shark management plan shows an encouraging move towards non-lethal methods of shark control and a policy of phasing out nets and drumlines, which entangle and kill turtles, dolphins and non-target sharks, in favour of new technologies and better safety education.

While it’s hardly good news to find that four more of our ecological communities are now considered threatened, it is some kind of achievement to have this status formally recognised at the Federal level. The first of these communities, the Lowland Tropical Rainforest of the Wet Tropics, is essential habitat for cassowaries, tree-kangaroos and much other fauna and flora. Of course, we do have to ask, what took them so long? These lowland rainforests have been degrading and disappearing for decades. You can read more about both these news items in the latest HSI Newsletter.

And it’s good-bye from me …. this will be my last monthly Branch update. After a quick count there have been over 60 of those and countless other individual posts. I have enjoyed writing them and (hopefully) keeping you up-to-date with what our Branch is up to, as well as other snippets of wildlife conservation news and interest – and I have greatly appreciated your feedback and sometimes your keen eyes for typos and other errors!. But everyone and everything gets stale eventually and it is time for other typing fingers to take on the “newsletter” role and perhaps take a fresh approach. And you, dear readers, can always help –  because, while I often found there was more to put in than time or space would allow, at other times I was left hoping someone would volunteer material from their own observations or experiences, and was always delighted when they did. So, please get in touch with our committee if you have any such observations, anecdotes, news or photographs you would like to share.