It’s a pleasure to welcome two new members this month, Nicole and Alex. When so many community groups have seen their membership dwindle in recent years, it is encouraging that ours currently remains stable (even showing a slight increase), with this year’s new members making up for those we have lost through ‘natural attrition’. Let’s keep that up in 2022!

Saturday November 20th: NQCC Trivia Night!! Yes, this annual fun(d)-raising event is on again. Follow this link for all the details of the night, which will include a mega-raffle and other fun things. Start building your team, or just register yourself and join an existing team. Where? QCWA Hall, corner of Walker and Denham St, City. When? from 6pm.

Sunday November 21st: Upcoming field trip to Cungulla:  This will be our last field outing for 2021, visiting somewhere that (apparently) we have never been as a group, at least not in recent memory.

Previous field trip reports: We have two reports of previous trips for you to read. In September we visited the area of State Land at Mutarnee, where our glider-spotting cameras are now being employed. Read the account here.  And in October we had a late afternoon ramble around what is called the “Graves Circuit” in the Cape Pallarenda Conservation Park – an interesting saunter through changing vegetation with some wonderful views and one ‘exciting sighting’ – read more here.Thanks go to Denise for both accounts.

Tree management in Townsville: Representatives from several concerned groups, including our own, met with Council staff to discuss and critique the recently released draft documents on managing our local trees. We came away with some positives (including the news that a new Council Nursery is being developed in Anderson Park) but also an awareness that the documents and intended policy represent a fairly limited tree maintenance policy rather than a comprehensive vegetation management framework. The policy will give Council staff more power to resist demands by some residents for trees to be lopped or even removed for trivial or unjustifiable reasons, but does not address the need to grow our urban forest and thus make Townsville cooler, cleaner, healthier, more beautiful and more liveable. The push for this broader and more long-term approach probably needs to be taken to the elected members of Council. One question we should ask is whether Council has a target for the city’s tree canopy coverage, and if not, whether it would consider setting one? (A 2014 report found Townsville had 44.3% tree canopy cover compared with Cairns 78.9%)

Congratulations, Betsy! One of north Queensland’s leading botanists (or should that simply read, NQ’s leading botanist?), Professor Betsy Jackes has just been honoured by James Cook University with the award of an Honorary Doctorate of Science, Honoris Causae (HonDSc) “in recognition of her exceptional and enduring contributions to scholarship, community engagement, culture, achievements and sustained contributions and service to James Cook University”. Since she first began tutoring in botany at the then University College of Townsville in 1963,  Betsy has been an inspiring teacher and an untiring researcher into the plants of our landscapes, writing, publishing and constantly updating her familiar guides to plants of the Burra Range, Magnetic Island and Tropical Rainforests. Earlier this year she completed her latest edition of the Burra Range guide and, despite official retirement a few years ago, seemingly remains as active as ever. The Townsville Branch of WPSQ, which over the years has reaped the benefits of Betsy’s willingness to share her knowledge and experience, was proud to play a small part in contributing to the nomination for this award. 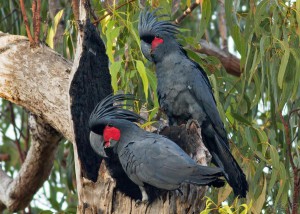 Saving our “Palmies”: Largest of all Australian parrots, the Palm Cockatoo is notable for much more than its size. It has a diverse and complex vocal range, an enormous bill, spectacular crest and ‘blushing’ cheek pads. Most remarkable of all is the male cockatoo’s habit of using a tool (a carefully selected stick) to drum against a hollow tree trunk or branch, producing a reverberating sound.  But the Australian population of these extraordinary and evolutionarily ancient birds is in deep trouble. Inhabiting only the northern part of Cape York, they are profoundly impacted by that old enemy, land-clearing, as well as by the inappropriate and damaging fire management regimes that followed European settlement. Adding to their vulnerability is the birds’ incredibly low reproductive rate and high rate of chick mortality. This week The Conversation published a rivetting article by researchers Dr Christina Zdenek (UQ) and Prof Rob Heinsohn (ANU) on what needs to be done to allow them to thrive. It’s accompanied by some stunning images – please do read it here. And you cannot fail to enjoy this short 2017 documentary featuring the same research team. Drum on, Palmies, drum on!

… and Saving our Owls: The recent ‘mouse plague’ in southern states has seen a massive increase in the use of deadly poisons that are not just killing mice, but our owls and other birds of prey too. The acronym SGAR stands for second generation anti-coagulant rodenticides – which are readily available at hardware stores and supermarkets. While we can empathise with those in the grip  of a genuine mouse plague, and understand the devastation this causes, Birdlife Australia advises that earlier or ‘first generation’ rodent killers (based on warfarin) are just as effective against rats and mice but take a much lower toll on wildlife. And for most people, not overrun with rodents, a simple mouse/rat trap is an even safer, and more humane, option. Please visit this site to read more about these poisons and their impact and also to sign two petitions: the first to Bunnings, the biggest seller of SGARs, and the second to the Australian Pesticide and Veterinary Medicine Authority (APVMA), asking them to restrict the sale of these damaging products by taking them off the open shelves in retail stores.