This area of state land was where some of us had been setting camera traps for mahogany gliders since the end of 2020 but had never had time to just walk around exploring the area. We were asked to concentrate our cameras on the western side of the block which had been burnt by Girringun Aboriginal Corporation earlier in 2020 as part of a long-term vegetation study. We are now ready to move our cameras further east next month. For our trip though, we just wanted to walk on the (often wrecked in the wet by 4wds) tracks that run through the block and look at vegetation, any birds, and to check out what was beyond the massive erosion area we’d previously seen the edge of. We also were interested in finding Lorna Creek: whether it was a water source for wildlife in the dry, and whether any Albizia procera grew in the vicinity. Both mahogany gliders and Kefft’s (formerly known as sugar) gliders chew the bark of these trees and eat the sap, so they may be an important food source when no other trees are flowering. 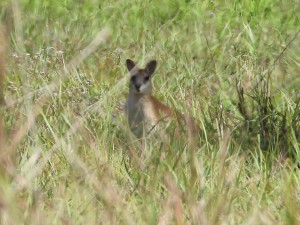 As we walked along the ruined start of Glider Road we were watched by an Agile wallaby on the cleared area next door, who repeatedly ducked down behind long grass along the fence, making it hard for the short and the short-sighted to see him. A little further along there was a male red-backed wren in the grass. That was basically it for wildlife for the day with hardly any bird calls noticed. However as usual there were lots of plants for the botanically inclined. 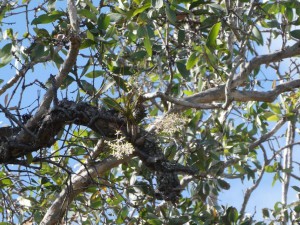 The area is mainly Melaleuca viridiflora woodland and the ti-tree orchids that grow on them were all flowering. While there are many large trees, none of the bloodwoods look mature enough to have hollows and provide dens for mahogany gliders, which helps explain having only one photo so far of a mahogany glider, even though as well as paperbarks and gum trees, there are grevilleas and grass trees which can all provide glider food. It seems the area was cleared many decades ago and is still recovering though it appears well-vegetated with many species. 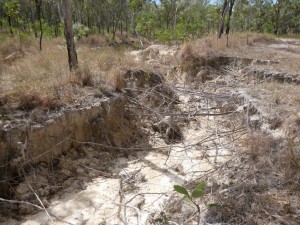 The erosion at the southern end of the track was an awful example of gully erosion and covered a large area. It probably will keep getting worse every wet season even though the presumed original culprits, hard-hoofed livestock, are long gone, as remediation work seems unlikely. We were fortunate to have a geologist with us who explained that the millions of tiny orange coloured nodules on the surface of the track and forming a large bank within the deepest gully were iron-magnesium nodules washed out of the soil. Leading out of the gullies was a tiny little dry creek which judging by a satellite image was Lorna Creek, which would be much more impressive in the wet season. No Albizia procera were seen but we didn’t search eastward along the banks for a less blighted area. 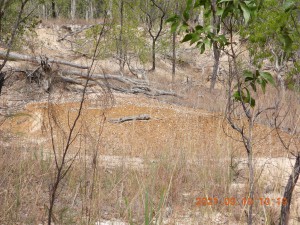 The track only went a little way further before we hit civilisation in the form of a cleared area around a cane farm. An apparent track heading east was a dead end, and another one a little further along was also, though it contained a muddy pool and was probably a drainage channel modified by bulldozer to drain the cane paddock. While it did not rate highly as scenery, there was enough shade to sit and have morning tea, which would have looked a bit strange to a farmer driving along the paddock edge. 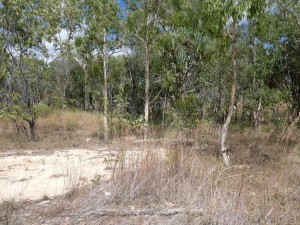 We returned the way we’d come, and then migrated to the bed of nearby Crystal Creek, just upstream of the bridge, for lunch in the shade of big old Melaleuca leucadendra trees in sight of clear running water.

Thanks to Margaret and Pam for their photos.