A WELCOME AND TWO FAREWELLS

To start on a happy note, we welcome four new members – Adriana, Catherine, Karl and Karen – who have all joined the Branch since our last update. Glad to have you with us!

Sadly, we have also had some departures. In September we mourned the loss of long-term member Sid Brischetto. Sid and Lorraine joined the Townsville Branch so long ago our records cannot confirm the exact date, but it was sometime in the 1970s. They loyally renewed their membership each year even when no longer able to be actively involved and from time to time we would read Sid’s well-argued letters on environmental matters in the Townsville Bulletin. We extend our sympathy to Lorraine and their extended family.

All members and friends will already know of the passing of Margaret Thorsborne, AO, our Society’s patron, dear friend and tireless defender of wildlife and wild lands. Margaret was farewelled at a simple but moving ceremony in Cardwell, attended by people from as far away as Victoria and New Zealand, who remembered her with love and gratitude. Our tribute to this extraordinary woman and her inspiring life is published here.  A Townsville ceremony to celebrate Margaret’s life and work is being planned for Friday 30th November – further details to follow.

The Thorsborne Trust: It was the wish of Margaret’s family and close friends that those wanting to show their appreciation of her remarkable life could do so by making a donation to the Thorsborne Trust. This was established following Arthur Thorsborne’s death in 1991 and over the intervening years the Trust has been working in great and small ways to advance wildlife conservation and habitat restoration particularly in the local area. Please read this post to discover more about the Trust and how you can donate.

URGENT – PARKS FOR PROFIT? THORSBORNE TRAIL UP “FOR SALE” ?

It was a bitter irony that, as Margaret Thorsborne was slipping away from us, we heard news that the Queensland Government was pushing ahead with plans to commercialise access and accommodation within our national parks. Right now three wilderness trails are in their sights at Cooloola, Whitsunday Island, and the world-famous Thorsborne Trail on Hinchinbrook. There is serious alarm, and anger, at the prospect of commercial operators having priority access to this part of our national park estate and at the types of infrastructure that will be deemed to be “necessary” to advance these interests, including construction of accommodation or “glamping” facilities at several points along the trail.

The government seems to be oblivious to the appalling mess left by the last private operator who left his mark on the island at Cape Richards. Have they also forgotten the cardinal principle of National Parks management is to provide for the permanent preservation of the area’s natural condition and the protection of the area’s cultural resources and values. In other words national parks are not playgrounds nor are they there to be milked by the tourism industry. Please view this ABC news report and/or read this fuller account on the ABC website. We will try to keep you up-to-date but in the meantime please sign this petition.

Margaret’s friends gather after her funeral in defence of the island she fought for. Photo Steven Nowakowski.

Pied imperial pigeon season is here! The first of this season’s North Brook Island pigeon counts took place on 11 October. Although it was a little earlier in the month than usual we were not prepared for the very low total of 2,813 birds when we had been expecting perhaps six times that total. Although unusual this is not the first time that October has yielded such a low total. Nearly twenty years ago numbers plunged even lower but a month later had returned to a ‘normal’ level, indicating that for some reason the birds had been just unusually late arriving from PNG. It is likely that the current extremely dry conditions have kept the birds back and we will have to wait until the next count on 20 November to see if the expected total is reached.

Mahogany glider monitoring has continued at our Ollera Creek site despite some concern about fires in the region threatening our cameras. In addition to mahoganies, we have confirmed the presence of both sugar and feathertail gliders. We have yet to record mahoganies south the of the creek where the vegetation is rather different but may have more success there as the bloodwoods and grass trees come into flower. All photos and data are sent to Daryl Dickson of the Mahogany Glider Recovery Team (MGRT) for confirmation and storage. Two spotlighting trips have proved unproductive (and logistically difficult) and we have learned from the experts that these animals are notoriously hard to find that way. On 29 October Beth, Denise and Liz visited Cardwell for a Recovery Team meeting and a workshop on future surveys into population trends. Our second report to QDES was submitted on 31 October. Huge thanks to Beth for her time and effort getting this done on time.

TRIPS PAST AND UPCOMING 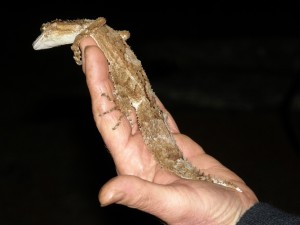 Branches meet up for bio-blitz   Only one member managed to travel up to the Tablelands to join the FNQ and Cassowary Coast Branches on the bio-blitz at Freeman’s Forest, but they certainly found some beautiful creatures (see leaf-tailed gecko photo at left). It was a shame that it was just  a drive too far, and rather short notice, for others to make it. But well done to the FNQ Branch on making the first step towards reviving the old get-togethers of Northern Branches – we are always going to be stronger if we link together and such events in the past were always fun and usually very productive. Maybe in 2019 we can organise something closer to a halfway point.

Recent field trips: Please read the reports of our outings to Clemant State Forest (August) and Florence Bay (September). The latter also took in Arthur, Radical and Horseshoe Bays – and, for one member, a quick look at Balding Bay as well – so covered a fair slice of the island’s coastline. A report on the October Bluewater trip will follow.

Last trip for 2018 will be on Sunday November 25th, destination Paluma in the hope of cooler temperatures. Further details to be advised but we are hoping to explore a lesser-known area.

Do you have ideas for trips in 2019 – places you would like to revisit or new destinations that you think would be worth exploring? Let us know!

Depending on events, we may squeeze one more update in before the year ends – but thank you for your support throughout 2018. Dare we hope for more positives than negatives in 2019 – because hope is what conservation is really about.