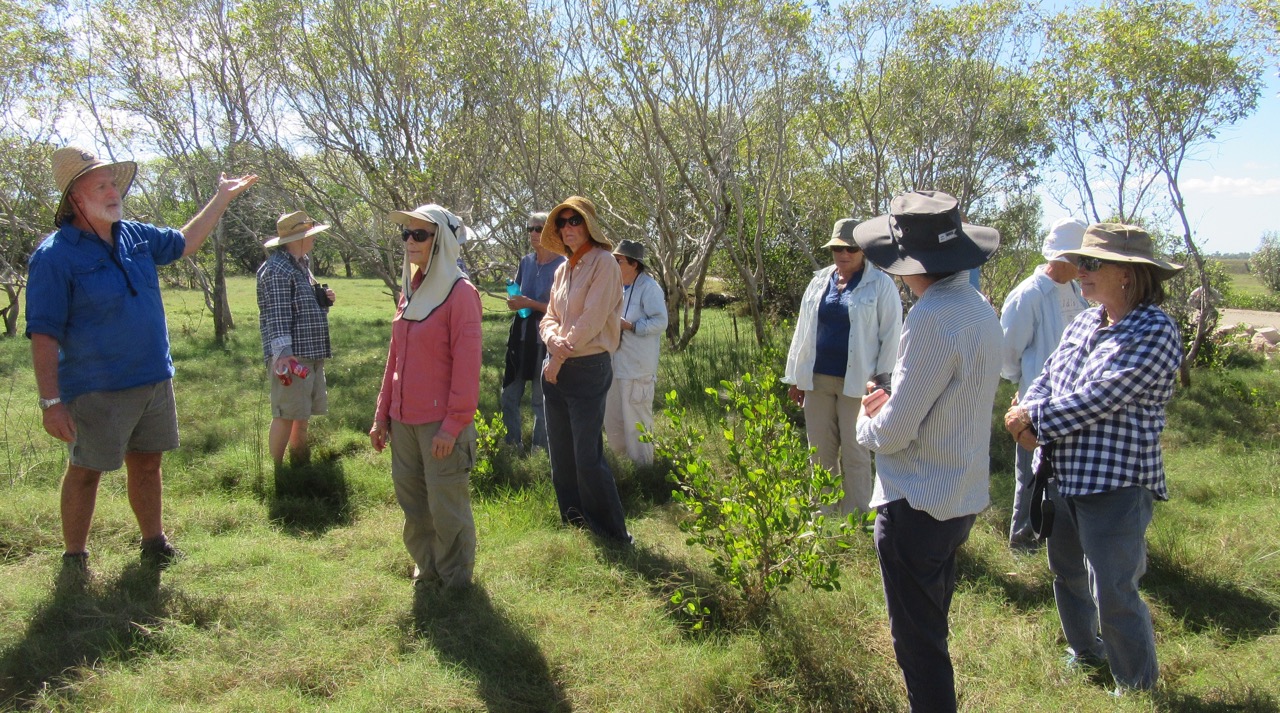 Jon explains the terrain at one of our stopping points. Photo L. Downes.

The July 23rd outing was along Jerona Rd to the small township of Jerona near the mouth of Barratta Creek. We were guided by Jon Luly who explained and pointed out various aspects of the landscape and vegetation at stops along the way. Jerona Road turns eastward from the Bruce Highway about 55 km south of Townsville and runs through cane paddocks, then cattle properties and eventually saltpan and mangroves along the coast. The long-serving past president of Townsville Branch, George Heinsohn, and long term (now distant) member and former vice-president Jo Wieneke were both visiting Townsville and joined 16 other members and friends. 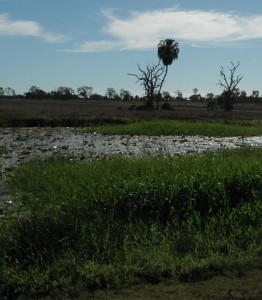 The first stop at the end of the cane farms was formerly wetland which had been turned into grazing land, leaving only small areas of water. The pond we stood beside had native water lilies and a few jacanas, but its water was being slowly smothered by Hymenachne amplexicaulus and Para grass Brachiaria mutica. In previous decades the Department of Primary Industries had facilitated the introduction of these exotic species for ponded pasture. Cows will eat the Para but don’t remove the roots, and they avoid eating Hymenachne except in very dry conditions in western Queensland when presumably nothing else is available (showing the detailed research done by DPI previous to its introduction). Both species of grass are now serious pests of waterways in northern Australia, eventually covering the entire water surface to the detriment of waterbirds and many aquatic species. We also saw Pied Cormorant, Pelican and a Great Egret. Two brolgas were seen off in the distance. Some remnant bushland with Corymbia tesselaris and Livistona palm grew on areas of higher ground at the swamp edge. 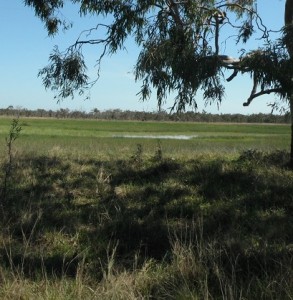 We noticed a White-Bellied Cuckoo-Shrike and a Rainbow Bee-eater in C. tessellaris and Clerodendrum floribundum when we stopped opposite a larger lagoon further down the road. It was harder to see much of the water birds as they appeared and disappeared in the grasses. There were several White-Necked Herons strolling. The head only of a Black Swan peered above the vegetation. Unfortunately we couldn’t get closer to see how many other birds were present. 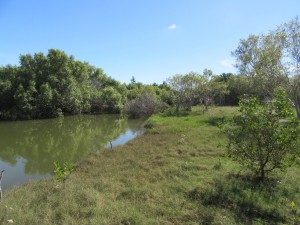 Further along, the road crossed over a mangrove-lined creek where the water was moving fast as the tide ebbed. Saltwater couch and Avicennia mangroves dominated the creek bank. We noted a Leaden Fly -catcher and a Mangrove Honeyeater as we stood on the boggy grass while exciting the resident mosquitos. Behind the mangroves was saltpan covered with samphire.

We drove further into a small area of savannah woodland behind mangroves. Jon explained how some plants had adapted, as Australia’s climate changed over millennia, from rainforest to much drier conditions. Grevillea striata and Alphitonia excelsa were examples of this, and were growing in the Kangaroo grass Themeda australis. The Holly-leafed Mangrove Acanthus ilicifolius was growing at the landward edge of the mangroves. 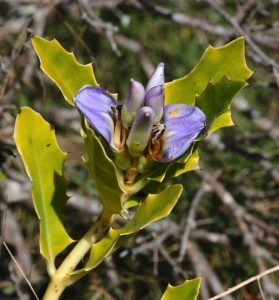 Just before Jerona itself was a strange landscape of undulating Ceriops tagal mangrove forest. Despite being on level ground, the trees grow in large contiguous clumps with the tallest trees in the centre and the rest progressively shorter towards the edges, giving the appearance of a low range of greeny yellow hills. Jon was unable to account for the strange growth pattern. We didn’t walk in to investigate as it had been a high tide earlier that morning and the ground would be too muddy after inundation.

Jerona is a small township of just a few streets of houses by the bank of Barratta Creek and we had lunch under a shelter by the boat ramp where raptors took turns at being photographed. We’d seen Black Kites and Brown Falcons along the way down, but here several Black Kites circled around us, and a Brahminy Kite and White-Bellied Sea-Eagle also made guest appearances. On the drive back, a Wedge-Tailed Eagle was ripping into a dead Agile wallaby right beside the road, not very worried by the car stopped nearby. It flew a few metres to the top of a termite mound so more close-ups could be taken, however no one managed to get a decent photo! Further along there were two young Whistling Kites in a dead tree. However, Bird of the Day for some was the Black-Necked Stork, more on Malcolm’s blog. 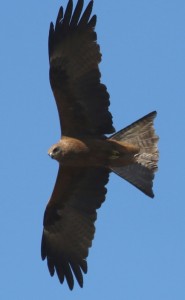 We thank Jon Luly for taking the time to share his knowledge of this diverse landscape with us.