Our August update brings reports of recent events, news of those coming up and of current issues worthy of attention and action. Please follow the links to individual posts.

AUGUST FIELD TRIP ~ PALUMA TRACKS ~ SUNDAY 20th AUGUST.   Our revised destination for this Sunday is still Paluma, but instead of the wilds of the Dam we will walk the Andrée Griffin memorial track. For those who don’t know, Andrée was one of our founding members, a long-serving treasurer and an honorary life member of the Society.  One of Townsville’s first ever social workers, she lived at Paluma after retirement where she could fully indulge her passion for birds. Read more about Andrée here. This track gives the option of continuing on to Cloudy Creek falls and/or completing the loop back to McLellands lookout, but other options will be considered. And there’s always the indulgent option of bird-watching with a cup of tea and a plate of scones at the famous Ivy Cottage.

Meeting time/place: 9.30am at the Paluma Village Green. The Paluma turn-off is 65km north of the city and then a further 22km of mostly winding road up to the village. Depending where you are coming from, allow ≈90 minutes for the drive (about 75 minutes from Deeragun). Bring lunch and water, walking and birdwatching gear, insect repellent and whatever else you might need. Email us if you have any questions.

CAPE CLEVELAND TRIP REPORT: Despite bouncy seas and less than sunny skies everyone enjoyed our trip to Cape Cleveland and its lighthouse with close-up views of a stretch of coast usually only seen from afar. Read the report of this afternoon adventure here. 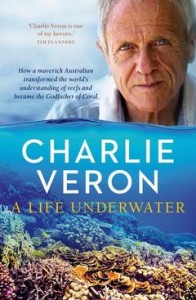 A LIFE UNDER WATER: Anyone interested in coral reefs, and even many who aren’t, will be familiar with the name of Townsville’s own Charlie Veron – the world’s foremost coral scientist. His decades of research have resulted in many outstanding works including Corals in space and time (1995), the 3-volume Corals of the World (2000) and the website developed from it, and A reef in time (2008).  In his newly published and engaging memoir, A life under water, Charlie recounts a life and career that began with childhood explorations of Sydney’s rocky shores and led to extraordinary insights and discoveries about corals and coral reefs around the world. In turn, despite his natural inclination to keep out of the political sphere, this prompted him to become a dogged though often despairing campaigner in defence of his beloved Great Barrier Reef. Charlie is a masterly raconteur and writes with passion, humour and humanity in a lucid and forthright style. Highly recommended – I almost literally could not put it down.

CHASING CORAL ~ A REVIEW: Inevitably the ever busy Dr Veron was closely involved in the making of this award-winning and captivating film, as well as attending its screening to a packed audience at JCU last month. You can read Peter Hanley’s review of the evening, which included a panel discussion, here. If you missed the screening you can watch it on Netflix if you, or a friend, has an account (or read the tip at the end of Peter’s review!).

THE FIGHT OF OUR TIMES – STOPPING ADANI. Yes! it is possible – but only if all of us who care about its impacts, both immediate and longer term, are prepared to make our voices heard. Do please read more about the issues and how you can help here.

LINDEMAN ISLAND – who remembers the Lindeman Island affair of 1986? A proposal to hand over most of the island’s national park to private developers split the then National Party government and caused widespread community outrage. And if you ever doubted that history repeats itself, or that we seem unable to learn its lessons, read this post and please follow the links to both petitions. 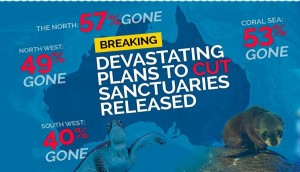 SAVE OUR CORAL SEA: According to the National Parks Association of Queensland (NPAQ), Australia could be the first country in the world to go backwards on marine protection. Despite their own scientific recommendations, the voice of the Australian public and the pleas of local communities, the Federal Government proposes to reduce, rather than strengthen its protection of the national network of marine reserves. The sanctuary planned for the Coral Sea in 2012 is the hardest hit – under the new plan it would be reduced by over 50%. But there is still time to have these cutbacks reversed. If enough of us speak up there is a chance we will be listened to – please read more here [Link expired] and follow the prompts to have your say.

…. AND OUR KOALAS! This message came in this morning: Up to 80% of the koala population in Southeast Queensland has been lost in just 20 years due to destruction of woodland habitat, traffic issues and domestic dog attacks. Please click here [Link expired]to sign a petition to the Premier for urgent action. The escalating loss of our wildlife is incredibly shaming and almost all measures to protect koalas will also help many other species.

ART OF OUR WETLANDS. You have until 20 August to see the remarkable exhibition of wildlife art by NSW artist Pamela Griffith at the Perc Tucker Gallery. This impressive collection arose from the artist’s 2014 visit to the Cromarty wetlands which, coincidentally, were the focus of one of our field trips in the same year.

DID YOU KNOW? At the left of this text you should see a panel which lists recent posts, useful links and a sign up box!! If you enter your name and email address (only the latter is recorded) and follow the prompts you will be notified automatically when there is something new to read. If you are not signed up you have to wait, for perhaps 3 or 4 weeks, until we send you an email to tell you what’s there! Less than a third of our members have taken the sign-up option but we would love to have many more (members and others) keeping up to date with our news in this way.  if you do sign up but change your mind, unsubscribing is easy.