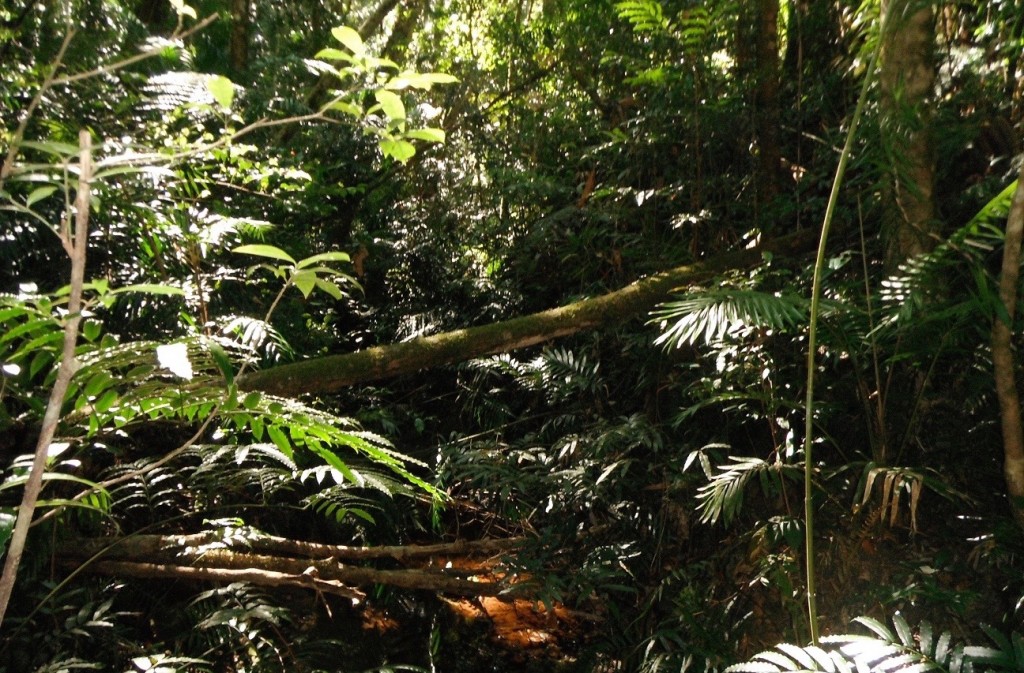 Along the track. Photo: WQ Townsville.

This walk was a last minute choice after finding the Paluma dam road would be closed for roadworks so we couldn’t walk along the western side of the dam as planned. The Andrée Griffin Memorial Walking Track, officially opened last December, is a fairly short track through rainforest starting at the edge of Paluma Village Green (opposite where Andrée lived for many years) and intersecting the Cloudy Creek track. 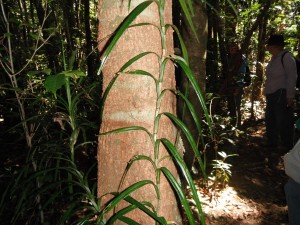 Andrée Griffin was one of the founding members of the Townsville branch of WPSQ, a committee member for 15 years, and made an honorary life member for her services to the Society and to conservation. She was a passionate observer of birds and in the 80’s along with Ray Swaby recorded bird calls of northern Australia. Many of these calls can still be listened to on the internet, and there are some surviving cassette tapes which surprisingly still work if you are the proud owner of an old cassette player. After Andrée retired from social work in Townsville she moved to Paluma where she was surrounded by birds, and continued to study them and enjoy their company until she moved to Good Shepherd where she died in October 2012. Her obituary can be found as a previous post on this website. 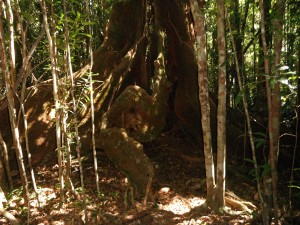 We wandered through the trees noting old favourites like the refrigerator tree, Gossia bidwillii, the flakey barked Syzygium papyraceum , the blue quandong Elaeocarpus grandis (left) and the climbing pandan Freycinetia (above).

On and beside the track were hundreds of tiny seedlings of Cardwellia sublimis, the northern silky oak, with its distinctive ‘butterfly wings’ cotyledons. Northern silky oak was once a staple of the Paluma logging industry before the area was protected. Bird calls were few and sightings fewer.

There were no volunteers for an icy dip in Cloudy Creek when we arrived there, and after a brief rest we returned by the same track to the village green where it was easier to watch birds including the Grey-headed Robin while we had lunch. 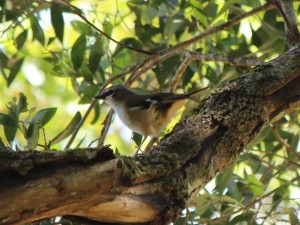 Those of us who didn’t need to return to Townsville early decided to check out a walking track we’d not been to, only read about. This was at the end of Hussey Road which is a bit further out of the township, and there we found a well-defined track that had several recently fallen trees across it in the first hundred metres. We decided the track was worth following to the creek at the end on another trip. One side of the track was almost a monoculture of Alphitonia regrowth, and back where we left the cars at the end of the road there were occasional Pinus rising above native trees, mainly wattles. A nearby resident said there had been a pine plantation there before cyclone Yasi wiped it out, and the six years since have allowed the natives to reclaim the area though the species diversity is still low. This would be an interesting area to watch how it changes in coming years if no one is allowed to bulldoze it again. 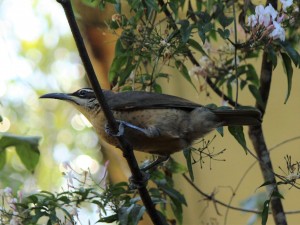 It was time to do bird watching at Ivy Cottage. Many generations of birds have visited there over the years for food placed out to attract them, and often to steal more off  the plates of customers. The periods when Ivy Cottage has not been operating may well have seen a decrease in birds with hardened arteries from regular cream intake. When we arrived there were four Rainbow Lorikeets eating something unidentifiable from a dish suspended at the end of the verandah. A Lewin’s Honeyeater advancing on the dish was chased away. The lorikeets finished eating but sat guarding the food. A female Victoria’s Riflebird was also intimidated, but when the male Riflebird approached, he was allowed to eat. Three lorikeets ignored him, but a fourth started to move towards him several times but its neighbour nudged it and it settled down. What had happened over previous days or weeks that the male was allowed access to the food? Had he needed to threaten them or simply refused to be chased away? Did the female ever get to the food while the lorikeets were around? Why did the lorikeet who wanted to chase away the male Riflebird adhere to the truce when reminded? Unfortunately it would probably take many visits and a high intake of coffee and apple pie for us to begin to unravel the relationships between individuals and species at this food source. 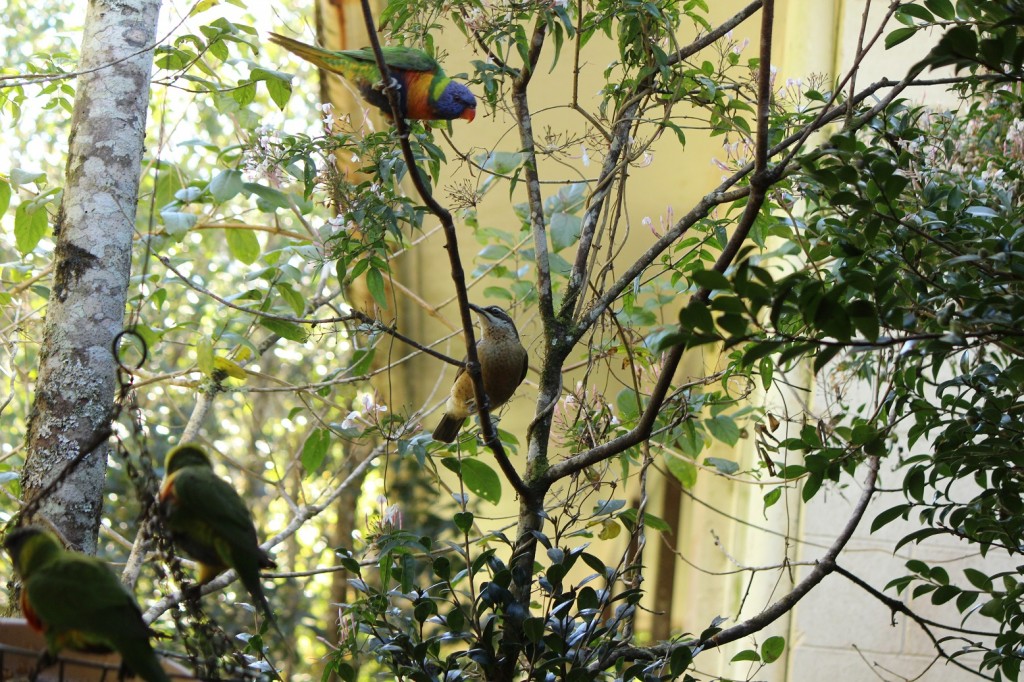 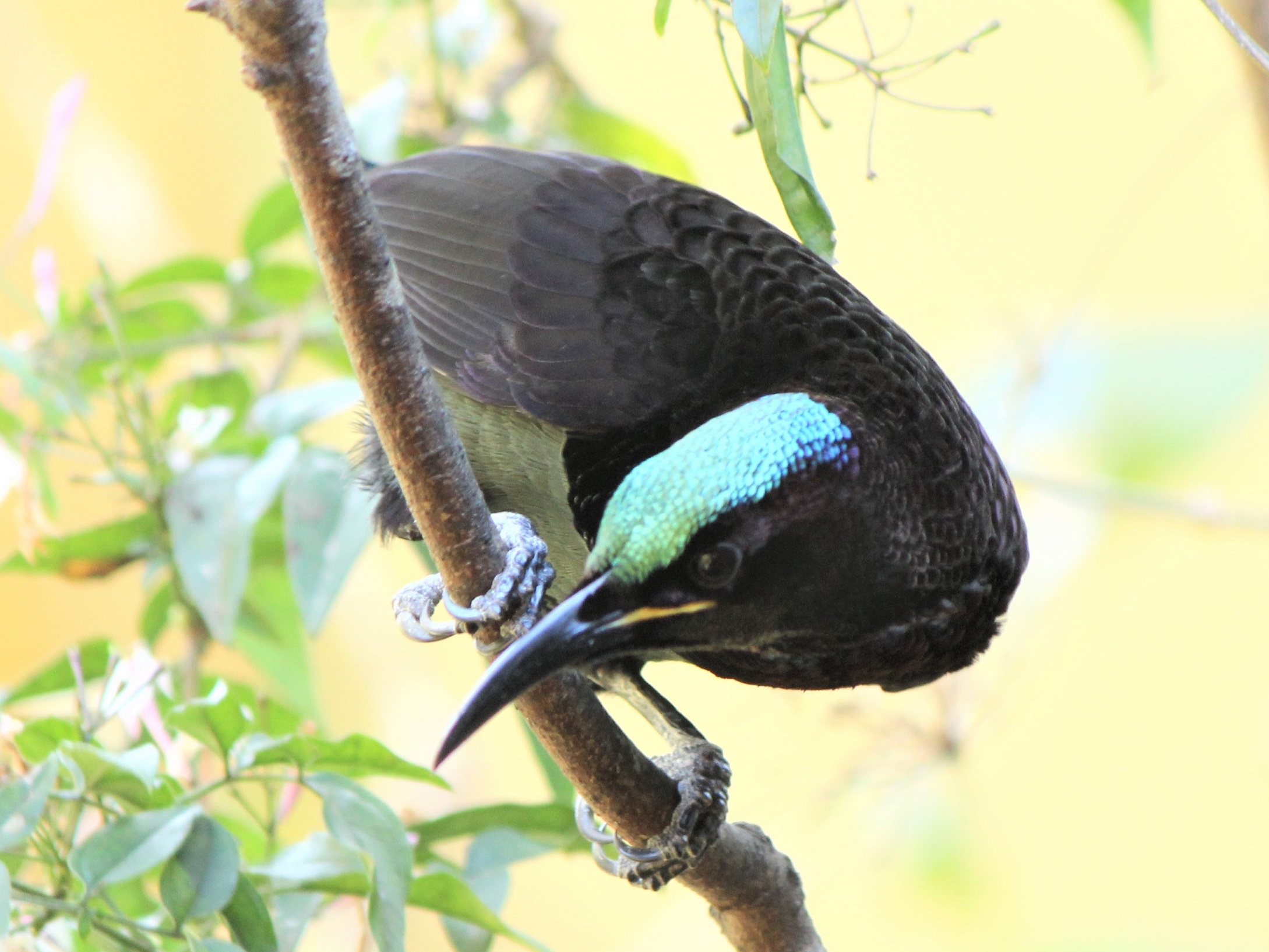