In the last months of 2016 we were saddened by news of the loss of two very special members who enriched the lives of those who knew them. They were both warm and generous in spirit and shared a love and concern for the natural environment. We will miss them both. 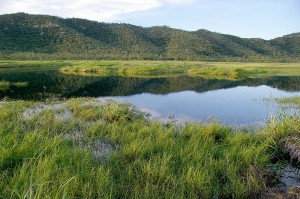 Roger Chandler, who passed away in September, was one of our most long-standing members – in fact the date of his first joining the Society was so long ago it is lost in the mists of memory and the dust of documentary records. Until recent years it was rare for him to miss one of our outings or meetings, at which he often contributed valuable knowledge. He was a keen birdwatcher but, like all good naturalists, his expertise went well beyond birds with a keen interest in all aspects of the natural world. Living not far from Aitkenvale’s Bush Garden he spent a lot of time there and he had a special love for the Town Common which he knew intimately. He loved a yarn and had a lively, sometimes irreverent, sense of humour and his radar could spot the phony, pompous or hypocritical a mile away.  In retirement he lived a modest, independent and busy life involved with several community groups, as well as keeping up with his former naval colleagues (he had known Arthur Thorsborne when both served in the navy in WW2). Roger was warmly regarded by his Anne Street neighbours, who threw him a street party for a recent birthday. He was a good neighbour, a helpful and loyal friend and “a gentleman” in the best sense of that word. While ill-health necessitated a move to live with his son and daughter-in-law in Ipswich, he always enjoyed getting our news and had sent us a typically cheerful, forward-looking letter just a couple of months before his death.

Roger was not one to seek the limelight and sadly we have no photos, but the above image of the Town Common, a place that he loved, taken by someone he thought highly of, seems appropriate. 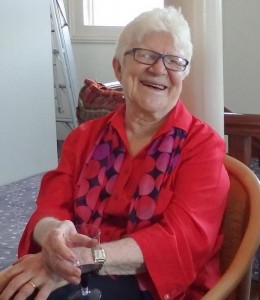 Madge in her favourite colour and with her familiar, ever-present smile.

Madge Sceriha had been a friend and donor to the Society for some years before responding to one of our annual membership drives as we tried to boost numbers after several years of inactivity. We were touched that she was so eager to take out membership despite a disability which prevented her from joining our activities –  she insisted that she wanted to support our conservation efforts and liked to read about what we were doing. We received several emails from Madge saying how much she had enjoyed participating “vicariously” in our latest field trip through the words and pictures on our blog. Madge was very well-known in the Townsville community and, like Roger, was regarded with great affection and respect. She had achieved  a Masters degree in Social Work from JCU and was a strong advocate for the needs and rights of older citizens and for women and their families who were in difficulty or distress. Her compassion, humour, spirit and strong sense of social and environmental justice informed everything that she did. Last August she was named Townsville’s Senior of the Year. Madge’s farewell service in December beautifully celebrated her life and passions – there were tears of course, but also much laughter and some wonderful singing from the “Seniors Creating Change” choir which she helped to found. Uniquely, but characteristically, Madge wrote her own goodbye to her family and many friends which read very succinctly: “Bye now! I’m off to the big cosmic compost heap at Energy Central! If I have a choice I’ll join that energy stream that is “the wind beneath the wings” of social justice; an end to poverty and violence in all its forms – especially to our environment!”

We mourn the loss of both Roger and Madge and  extend our sympathy to the Chandler and Sceriha families. But, in honouring their memories, we should reflect their positive natures and remember them both with smiles and cheerfulness.