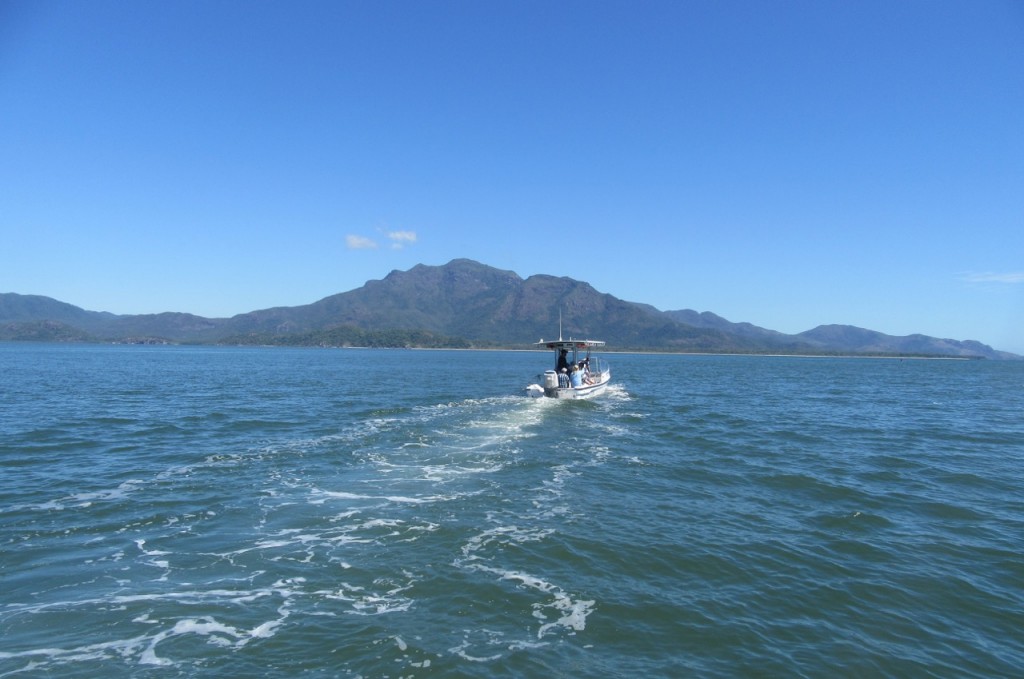 We’re off! One of our two boats heads across towards Georges Point. Photo Liz Downes.

Was it a stroke of genius or just some positive thinking that prompted the idea for our end of year venture to Hinchinbrook’s Zoe Bay? When Denise came up with the suggestion I admit to worrying that it would be too hot (well, yes), too wet (insert sardonic laughter), too expensive (at an expensive time of year) or just too much to organise (at a busy time of year). But, whatever gods roost on Mt Bowen’s cloudy peak, they must have been smiling on us. We had a beautiful day in Hinchinbrook’s glorious surroundings. 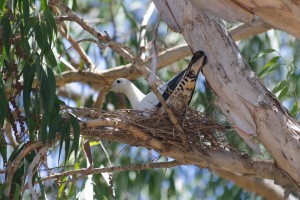 All 21 participants did well to arrive at Dungeness in good time and good order. In the little park where we assembled we had trees to shade us, with some good bird-watching thrown in.Three pied imperial-pigeon nests (at least one with chick) and one helmeted friarbird nest were spotted just above our heads, while a family of curlews was hanging around nearby. Not a bad way to start.

We divided our numbers between two boats provided by Hinchinbrook Island Cruises for the 30 minute trip. There was enough breeze to ruffle the surface of the water and to keep us cool as we sped across the entrance to the famous Channel and past George Point and Mulligans Bay. On our left the craggy peak of Mt Bowen could be seen poking its head above the nearer hills and after rounding the steep rock face of Hillock Point we now had a close-up view of part of the island’s seaward coast and could observe the wind-sheared vegetation of the hill slopes. Cyclone Yasi had a savage impact on this vegetation nearly six years ago and recovery has not been helped by the recent extended drought – in places there were large swathes of dead trees. Nonetheless the ruggedness of this coastal landscape is most impressive. 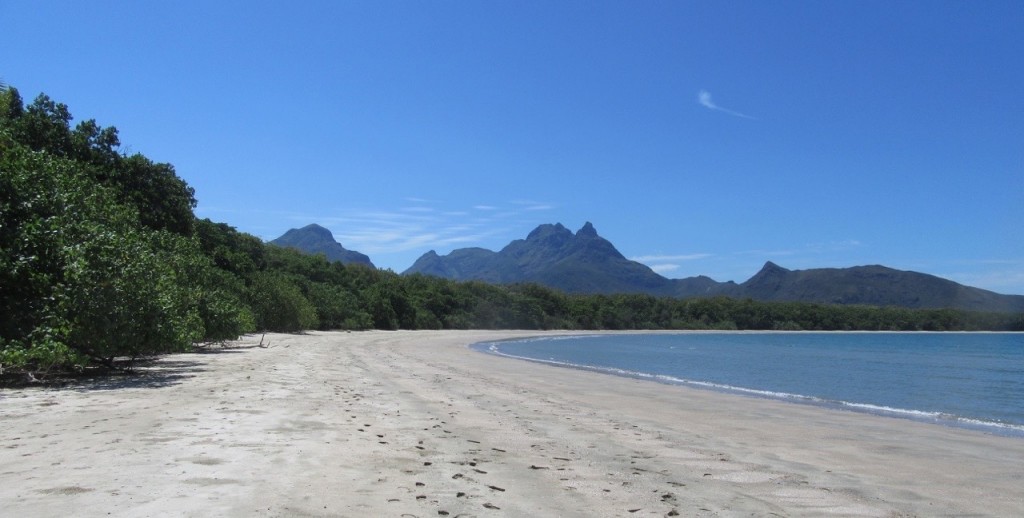 As we turned into the arc of Zoe Bay the breeze died away and once landed on the beach at the mouth of the mangrove-lined, and doubtless crocodile-filled, South Zoe creek we were quick to seek the shade of the dense foreshore vegetation. The walk up to Zoe Falls took us through closed canopy rainforest, some areas of no canopy (perhaps the aftermath of Yasi) and riverine vegetation along the creek. While some of us were eager to reach the pool as quickly as possible, the botanisers were happy to linger and identify some of the plants, from tall trees to small legumes, found along the way (more details below). 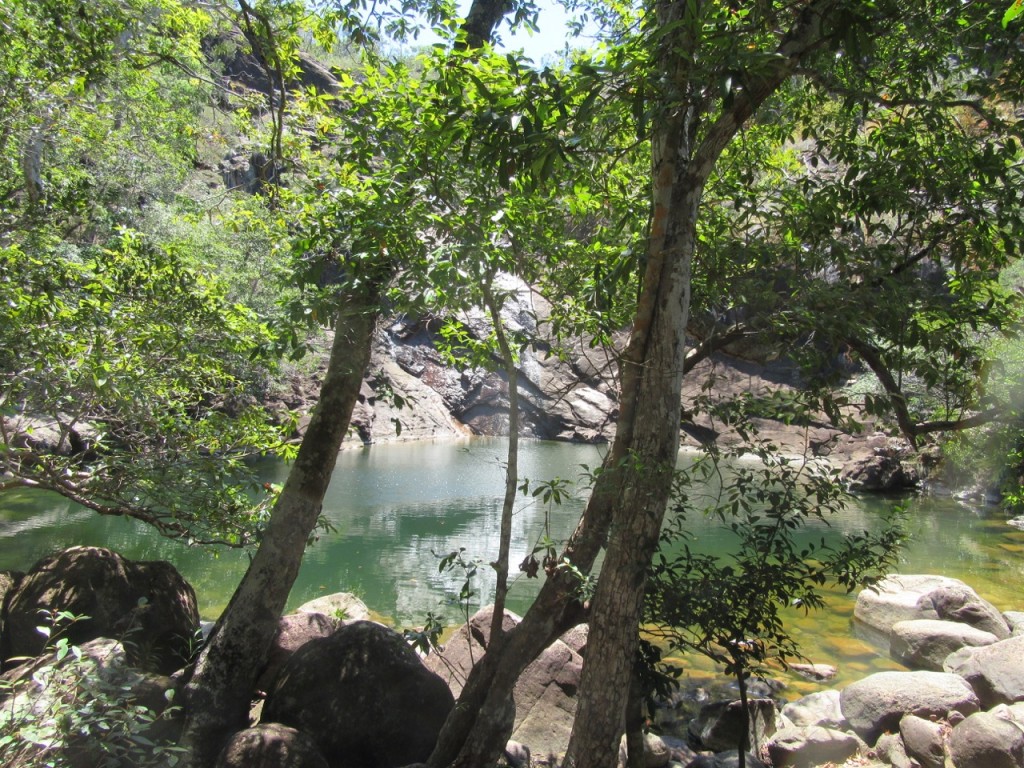 The pool was so delicious that some were reluctant to emerge even for lunch, while others could not resist a second dip before leaving. The water may well be icy in the middle of the year but in December, flowing down over a big slab of warm rock, we could slide or leap in without even the hint of a shiver. There are some experiences that are simply too blissful for words and immersion in this wild and beautiful pool was one. 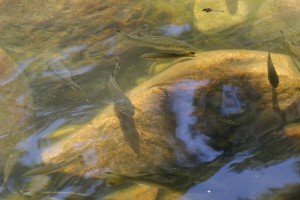 It was too hot for birds to be active at the time we were there but I could well imagine that sitting near the pool or the creek at dawn or before dusk would produce some great birding. Apart from those we saw at Dungeness, just two honeyeater species (yellow-spotted and brown), a pied monarch and a northern yellow robin made up our island total. Of aquatic fauna we were perhaps relieved NOT to see any salties waiting for us at our landing point, but the pool was full of jungle perch and from the boat Julia spotted two surfacings of a Sousa dolphin (either a single animal appearing twice, or two separate animals). 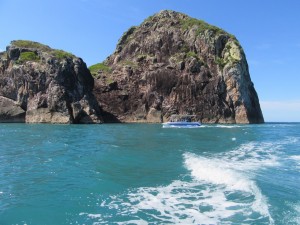 Hillock Point towers over one of our boats. Photo Liz Downes.

For most of us the real star of the day was the magnificent landscape of Hinchinbrook itself: the towering peaks of Mount Bowen and its neighbours, the crescent-shaped sweep of Zoe Bay’s silvery beach, the tranquillity of the pool below the falls, the lushness of the mangroves, the dazzling but changeable colour of the sea, and the dramatic drop of Hillock Point’s rocky cliff sheer into the water. What a spectacular and precious place this island is, and how privileged we were to see it in such sparkling conditions.

My usual grateful thanks go to Malcolm and Margaret for sharing their photos and to those who contributed their knowledge to species lists and notes – and a special cheer for Denise without whose imagination and organisation this trip would not have happened. Please do browse our Dropbox file for a selection of photos received. Each one has photographer’s initials and caption – please let me know if you cannot view these! You may find the caption only appears on the initial view, not when you go to full screen. And don’t forget to click on any photos in this post to bring them up to full clarity. 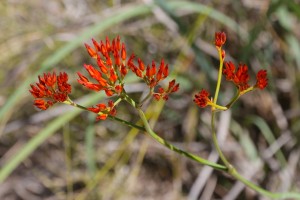 On the subject of plants … In addition to those listed below there were several Acacia species, a cluster of palms which were possibly the Solitaire palm (Ptychosperma elegans), a vine with heart-shaped leaves, possibly Aristolochia sp.,  grass trees (probably Xanthorrhoea johnsonii), a fig with bright orange fruit (Ficus dupacea or F. rubiginosa), an  attractive fern, probably Lindsaea sp. – to name a few.

There was some post-trip discussion  regarding the banksias seen during the day, partly because of recent attention drawn to the threatened “blue banksia”, B. plagiocarpa, which is found only on Hinchinbrook and one nearby mainland peak. As the latter grows only on slopes above 250-300m, we concluded the ones we saw much closer to sea-level were B. aquilonia. However, as we approached the mouth of South Zoe creek in order to land, we did get glimpses of where the controversial 2014 fire, which allegedly destroyed huge numbers of the fire-sensitive blue banksia, had swept over one of the ridges in the Bay’s hinterland.

There are photos of some of these plants in our Dropbox file, and of course you can also google the names for further information. 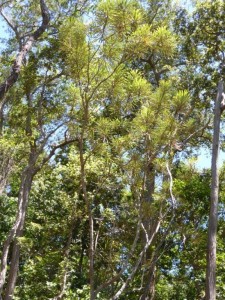 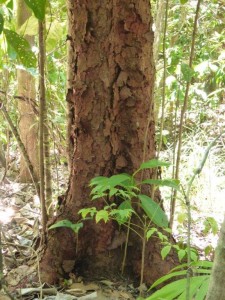