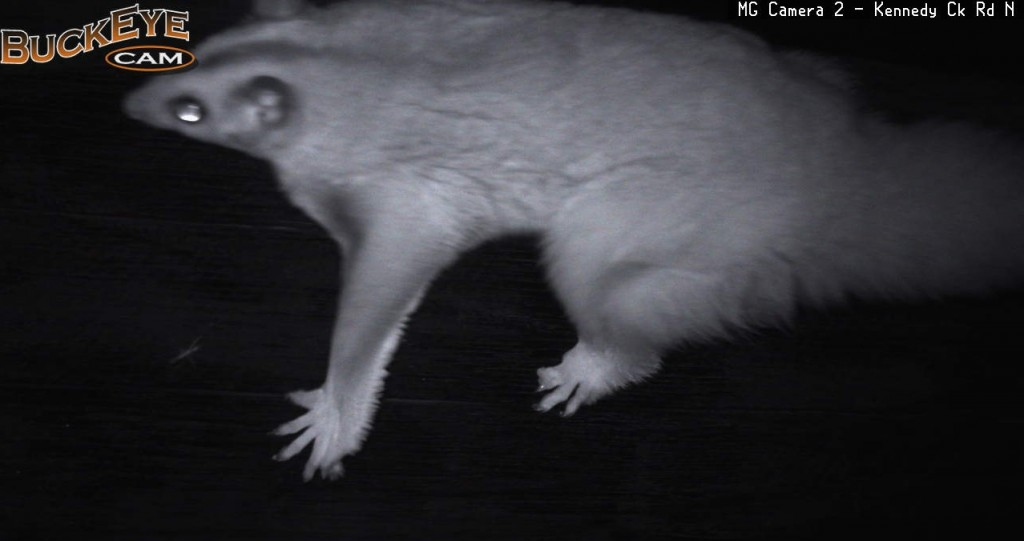 Last November Townsville Branch members, Denise and Pam, travelled north to learn more about what is being done to safeguard the future of the mahogany glider. The following account is by Denise, with photos from both Denise and Pam. 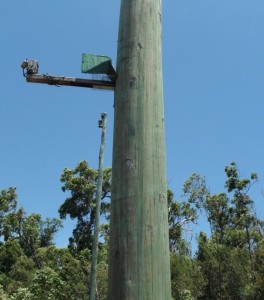 The Mahogany Glider Recovery Team (MGRT) held a field outing in mid-November to show what has been done to reconnect areas of glider habitat. We joined people from MGRT, Terrain, Girringun Rangers, QPWS, Conservation Volunteers (CVA), Cassowary Coast Regional Council, Ergon and the Cassowary Coast & Hinchinbrook Branch of WQ.  There are estimated to be only 1500 mahogany gliders left in the wild within a very small range and where their habitat has been totally destroyed or fragmented by clearing. Little of the remaining habitat is protected so the Recovery Team works with private land-holders and the community to try to reduce the threats to gliders, and to reconnect areas of habitat with revegetation and/or poles which allow the animals to find food, nest dens and mates over a larger area, and ideally help the population to increase and not lose genetic diversity.

First we looked at the new 20m pole beside Kennedy Creek Road which will allow gliders to cross safely to and from the trees at Glenbora Waterhole and along Bairds Creek. On top of the pole was the new motion-sensitive infra-red camera setup with its solar panels for power and wi-fi so photos can be viewed remotely on computer. There was still some tweaking to do to reduce the flare in photos but that would be done remotely. Already a frog and spider had been photographed on top of the pole. We all hoped for the first glider photo soon – and, just a few weeks later, it was exciting to see the photograph (at top) that had been captured by a camera on the Kennedy Creek Road! An area of land along the creek had been given to the Recovery Team and was now fenced without barbed wire. Revegetation had started but was on hold until some useful amounts of rain fall. A den box was attached to a large Melaleuca dealbata near the waterhole. Funding for the pole, camera and wildlife-friendly fencing came from the “Bridging the Gap” appeal conducted earlier in the year by WQ head office. 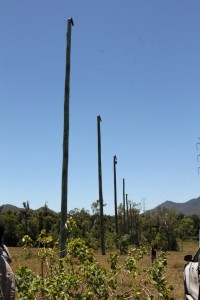 The next stop was the widest gap between areas of Mahogany Glider habitat (at Lily Creek) and was bridged by a line of poles with cameras and shelves to hold lures of raspberry cordial/syrup mixture. These poles have been in for a while and the gliders have been photographed on poles further along the line than just the end poles, so it seems they do use it to move across to trees at each end. Rangers need to climb up to the cameras to check batteries and change memory cards so this is an older, more labour-intensive system that ideally could become a remote access system in the future. Chris, a Girringun Ranger, said that they had ceased to use any lures when they realised that some mahogany gliders were spending up to 20 minutes at the lure out in the open and increasing the risk of owl predation.

We looked at a private cattle property where the owners have, as part of a Terrain initiative, put in fencing with a plain upper wire and 3 strands of barbed wire, and droppers between posts so there is too little slack for cows to push through. Gliders, bats, birds, kangaroos and other wildlife get caught on barbed wire and suffer terrible injuries and a slow death if not rescued in time. Most entanglements are caused by the top strand, so a plain top wire reduces the death and injury rate, though doesn’t eliminate it entirely. The property lies on both sides of a road, and a bare paddock which needs shade trees for the cattle is to be planted with suitable natives so it will serve as a wildlife corridor as well when grown, and connect remnant vegetation on both sides to allow glider access across the road. 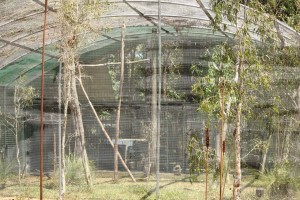 We moved on to Daryl and Geoff’s property in the Kennedy Valley – Daryl is president of the local WQ branch and she and Geoff have extensive experience in caring for and rehabilitating injured or orphaned gliders. Here we saw a small area which had been subject to a cool burn which removed a tangle of vines and some of the fallen trees and branches from Yasi without harming taller trees. This was to allow recruitment of Eucalypts and Melaleucas to keep the area as open woodland suitable for mahogany gliders. The large cage for the rehabilitation of orphaned and injured gliders was empty of inmates. Daryl said there had not been a mahogany glider in care for 6 years and that, while that might seem a good thing, she thought it was probably related to a decrease in numbers locally since Yasi. We did see sugar gliders which had been released but have taken up residence in a partially hollow vertical log which supports a bird bath near the house. They get into the log through a crack in the side of it. These beautiful animals are not considered endangered because of their widespread distribution, yet tree clearing must kill some every day.

Thank you to everyone involved in showing us around and for providing lunch. It was an interesting and enjoyable day. We hope the Mahogany Glider Recovery Team has projects south of Ingham in the future so the Townsville branch can be involved.

P.S. Although this article is posted too late for Christmas shopping advice (sorry, Denise) if you are looking for a gift for yourself or a friend do consider some of Daryl Dickson’s beautiful wildlife art. You can view it here or, next time you are passing through Cardwell, stop in at the delightful Vivia’s Cafe whose walls are adorned with Daryl’s paintings. 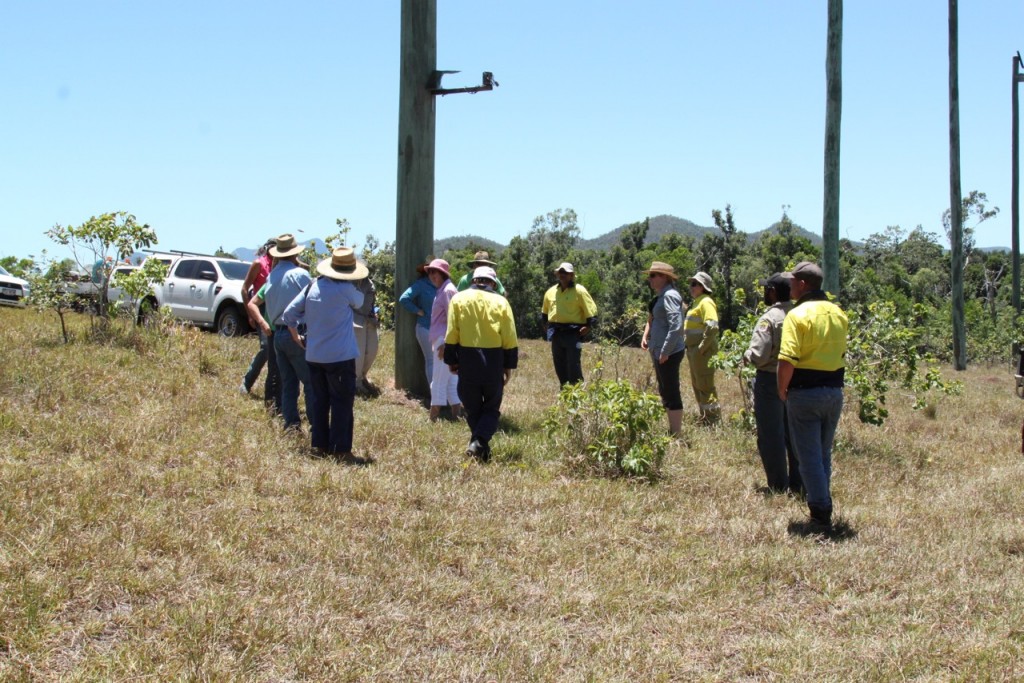 Some of the group attending the workshop. Photo Pam Cocks. 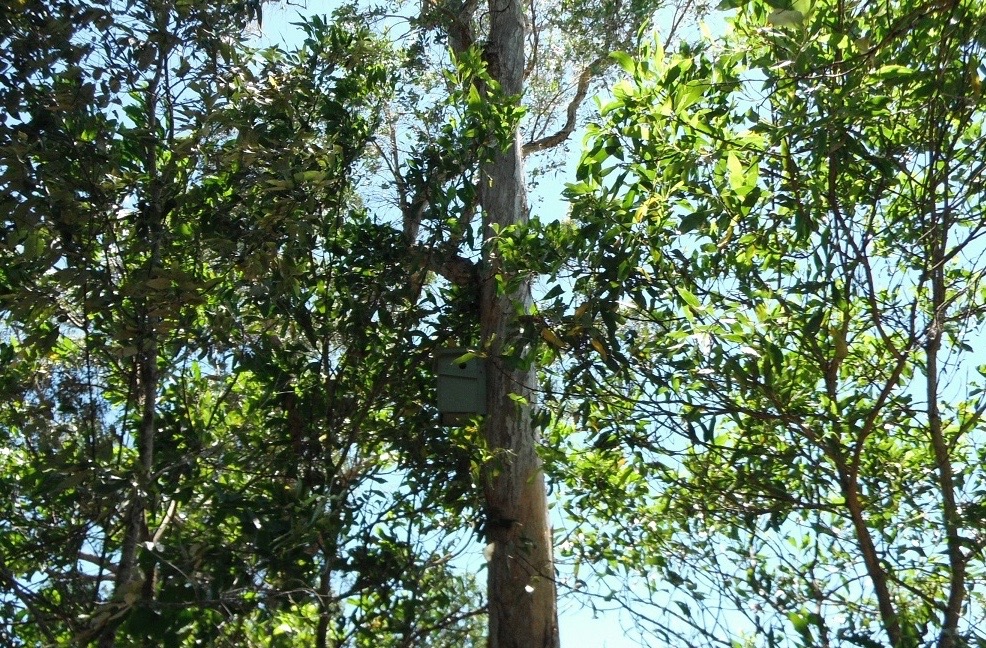