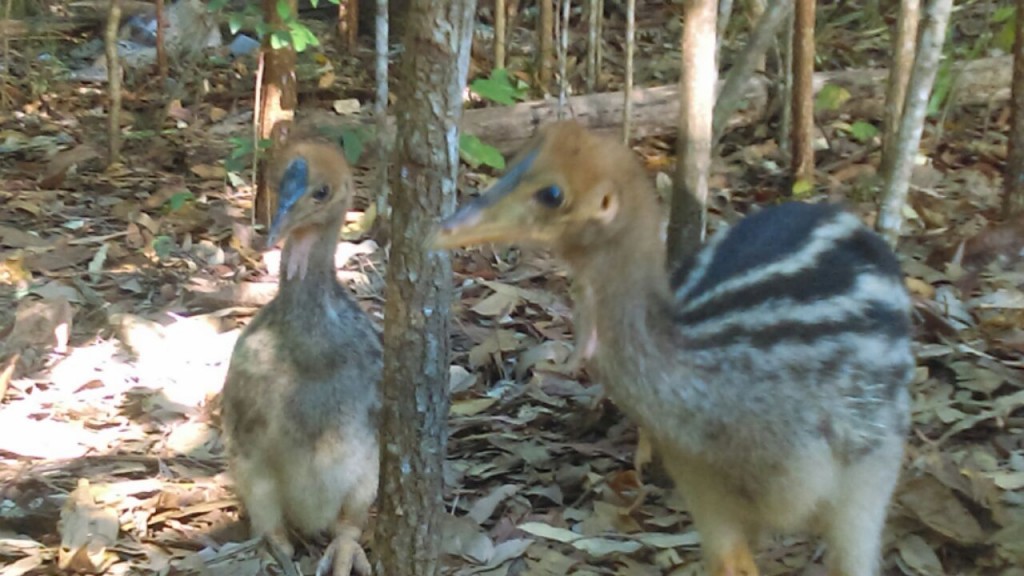 Phew! What a month it’s been! As soon as the weather warms (not that it cooled much at all this year) things start happening: summer migrants arrive (in their thousands in some cases), and, as you can see from above, almost everything starts breeding – cassowaries, marine turtles, terns, curlews  and flying-foxes are among those demanding, and deserving, our care and attention. Thanks to Kenn Parker of the Murray Valley who managed to snap this lovely photo of two youngsters who don’t understand about “sitting still” for the camera.

HINCHINBROOK (Zoe Bay) TRIP – Saturday 3rd December. We now have 21 people booked and ready to go on what should be a wonderful day – weather permitting. All those booked have been contacted with a reminder about meeting time and place and other details. If you did NOT receive this email, sent on Friday morning, please contact me asap. And if you have booked, but can’t go, please also advise promptly so we can fill your place with someone from the waiting list.

TURNING TURTLE: Are you interested in helping to rescue stranded turtles? This is a busy time for the Sea Turtle Foundation with reports coming in about turtle strandings, dead turtles and nesting turtles. If you would like to help with collecting or reporting dead turtles, monitoring and marking turtle nest sites or rescuing stranded turtles (some online training required) do get in touch with Johanna or Alice from STF.

ACF IS COMING TO TOWN– Thursday 8th December, 6-8pm. Two key members from the Australian Conservation Foundation will be visiting Townsville and hoping to meet with ACF members, supporters and friends to talk about the Adani coal mine campaign and much else – coal, climate change, renewables and the reef (to name a few!). If you would like to come along it will be held in the garden of the NQCC’s office at 114 Boundary Street. You can RSVP here (that’s just for catering purposes) – but you would be very welcome even if you haven’t replied. Open to anyone interested in the reef and its future.

OUR OCTOBER FIELD TRIP to Cockatoo Creek (Mt Elliot National Park) was minus the obligatory cockatoos but provided plenty of interest with a host of plants to identify, two very attractive skinks (one of which is on the threatened species list), a number of birds (some more elusive than others) and, not quite so good, a mob of horses! Read the report here, and check out the file of photos (the link to this is in the report).

NORTH BROOK PIP COUNTS: The first two counts of the North Brook pied imperial-pigeon colony for the 2016-17 season have now taken place, with two more to come in December and the new year. Please click here to read about the November count, and the other things we saw apart from the many thousands of beautiful pigeons. 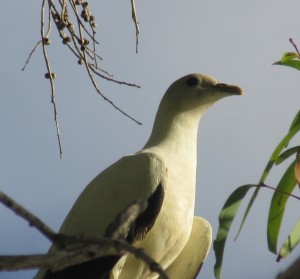 PIP WATCHING: PIPs don’t just hang out on islands or in coastal forests. Many also come to our urban areas where they find fruits to their liking, especially from the palms in our parks and backyards. Some of them even nest here and I have been monitoring one nest on the riverbank at Aitkenvale. Please go to the PIPwatch site to record any PIP nests or other activity that you observe. Even better, can you find a spare couple of hours one day, roughly between 4-6pm, to sit on a beach and count any pigeons that fly out from the mainland?? Any one of our northern beaches would be a good site. You can find all necessary details here.

MAHOGANY GLIDER FIELD DAY: Vice-President Denise and branch member Pam travelled north to Kennedy to attend an information day in the field, presented by the Mahogany Glider Recovery Team and the Cassowary Coast branch of Wildlife Queensland. I hope to be able to post more details later about the work being done to safeguard the glider now and into the future. 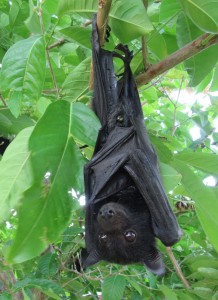 FLYING-FOX UPDATE: Townsville’s dedicated flying-fox carers have been pushed to the limit collecting and caring for dead or abandoned babies and adults in Dan Gleeson Gardens. Carers reported finding many more fatalities and casualties than they would normally expect from a colony of this size but our representations to Council and DEHP have resulted in zero or minimum response.

DEHP officers are said to be monitoring the situation, yet they report seeing very few or no casualties – either they are looking in the wrong place or they are arriving after the carers have collected the survivors and the Parks staff have disposed of the corpses. A similar situation in Ingham is causing concern, and a lot of work, for carers there. Read more here.

UNDER THREAT? Hinchinbrook’s blue banksia. The blue banksia, Banksia plagiocarpa, is unique to Hinchinbrook island and the slopes of nearby Bishop’s Peak on the mainland. It is listed as vulnerable in the 2016 Census of Queensland Flora. Grave concerns have been raised regarding the future survival of the species on Hinchinbrook after a series of very hot fires (apparently part of prescribed burning) burned through a forest of these plants between Mulligans and Zoe Bays. You can read more in the National Parks Association newsletter here (scroll down to the second item) and a video has been posted on youtube – view it here. The footage is certainly alarming and depressing.

That’s it for this month – remember to watch out for wildlife, and keep those birdbaths full!