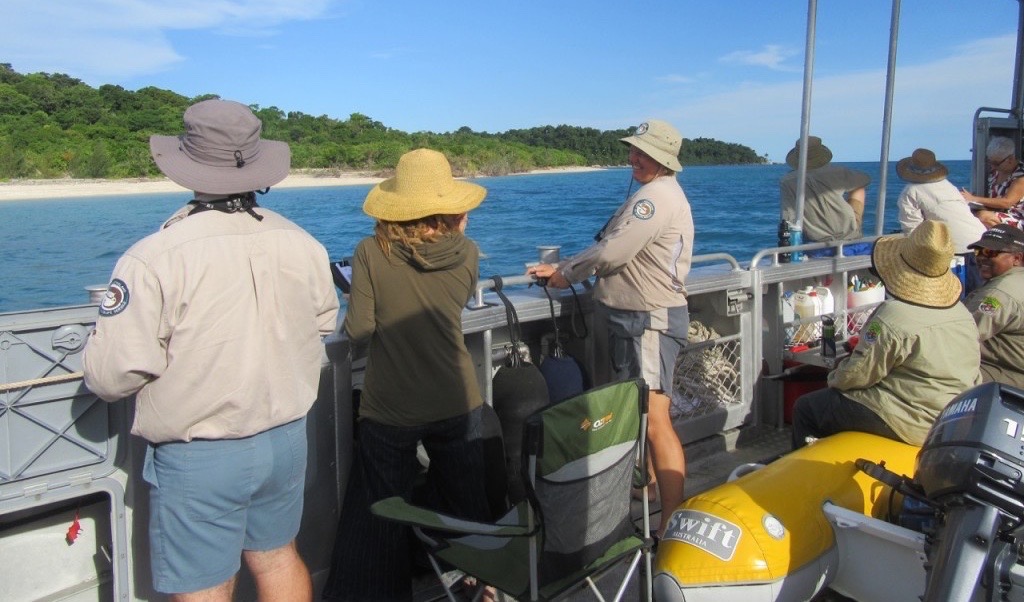 All eyes watching. Counters get ready for the birds to arrive.

The first of this season’s Pied Imperial-pigeon counts on North Brook island – the 51st year of this remarkable survey – was held on 27 October and it was good to hear the total was a healthy 19,023. When I boarded the boat for the November count I was naturally hoping we would go higher – and we did, though in a somewhat lop-sided fashion.

Those who have seen the documentary, “The Coming of the White Birds” will be aware that counters and scribes divide into two groups to cover both the northern and southern approaches to the island. On this day I teamed up as a scribe for the southern sector and soon found the pace becoming increasingly frantic. With the counter’s calls coming faster than I could write, the task required intense concentration and a specific memory device to ensure that none were missed. Though focussing intensely on my scribe sheet I was vaguely aware that the northern sector team were having a much calmer time of it – and this was borne out a few days later when the statistics had been tallied and collated. Of the total number of 22,336 birds, a whopping 20,234 had approached from the south, and only 2102 from the north. (Hmm, if we were being paid for this endeavour the southern team might make a case for double time!). The busiest period was the 90 minutes between 4.45 and 6.15, while in the 15 minute segment between 5.30 and 5.45 the birds flew in at the rate of 250 per minute! An amazing sight.

Both the October and November totals are still below the figures that had become the norm in the two decades before Cyclone Yasi, but they do indicate the strong fidelity that the birds have for this particular roost and give us reason to hope that the numbers will continue to build as the mainland forests recover – always provided we don’t lose any more of this vital food source. We must never forget that these birds once numbered in the hundreds of thousands along this stretch of coast. 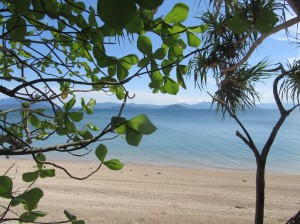 Leaves frame the view from North Brook towards Hinchinbrook.

In addition to the pigeons, large numbers of black-naped terns and smaller numbers of roseate terns were present on the island and a Marine Parks survey earlier that week had counted over 90 nests. For this reason we spent only a brief time ashore, collecting washed up debris, and stayed well away from the tern-nesting area.

As always, it was a day of fulfilment and exquisite beauty. Crossing Rockingham Bay we had sightings to port of dugong feeding trails on the surface of the water, while to starboard two dolphins briefly leapt out of the water. And wherever we looked were those breathtaking views to Hinchinbrook, Goold and the Family Islands

Health issues have prevented the “grand master” of the count, John Winter, from taking part in the trips this season but we are very hopeful he will literally be ‘back on deck’ for the final count in the new year. It’s certainly not the same without him but Emma Schmidt from Marine Parks (3rd from left in the top photo) has a great passion for the birds and has done a mighty job organising the volunteers, managing the logistics, supervising the counting process and making sure the long columns of figures are totted up accurately and promptly. Wildlife Queensland’s Thorsborne Trust also deserves acknowledgement for funding two of the essential counts.

NB. If you are interested in adding to our knowledge about this most beautiful of summer migrants, please check out the segment in our November update. And, with Christmas coming don’t forget copies of the DVD, The Coming of the White Birds, are still available – see our home page. 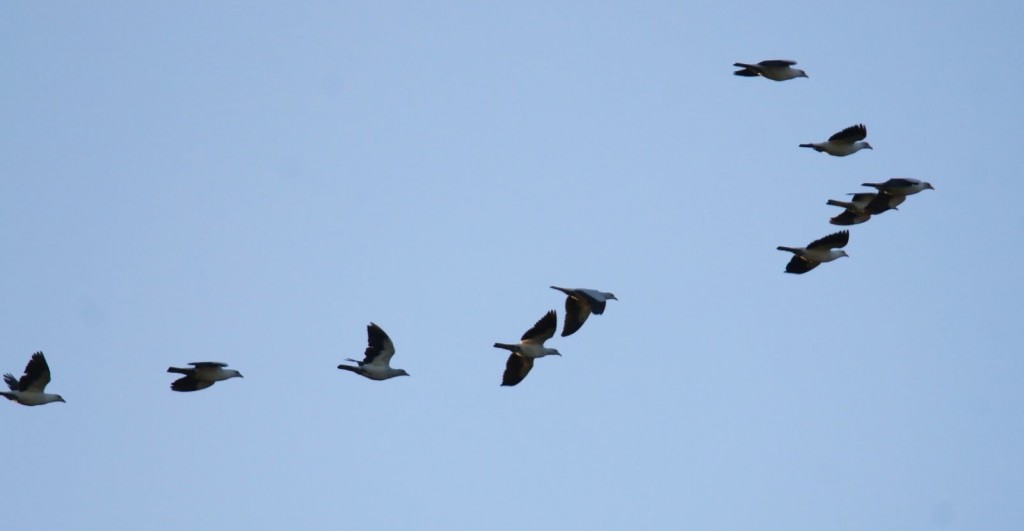