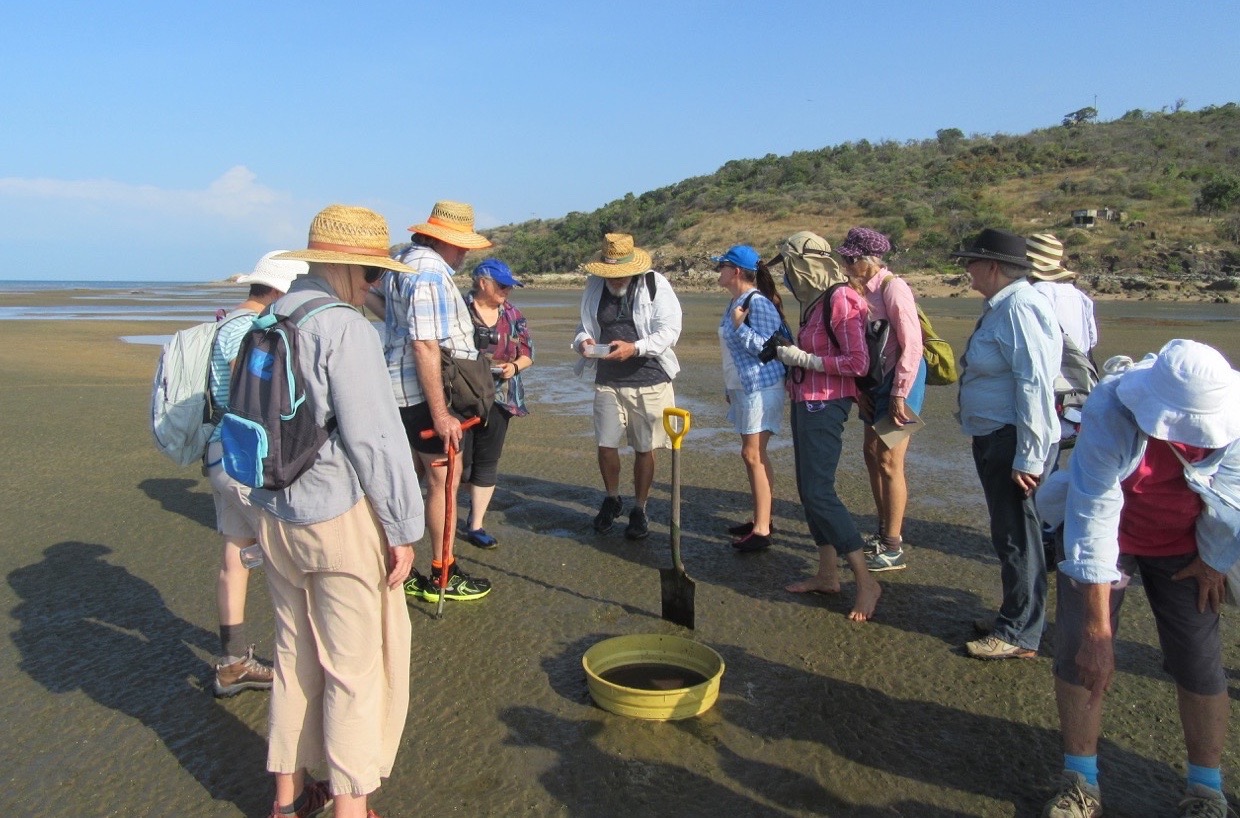 John (centre in straw hat) with tools of his trade and marine fossickers. Photo Liz Downes.

For the third consecutive year we enjoyed a wonderful afternoon discovering life between the tides with expert marine biologist Dr John Collins who, after nearly 50 years digging around our shorelines, probably knows this habitat even better than the back of his hands! 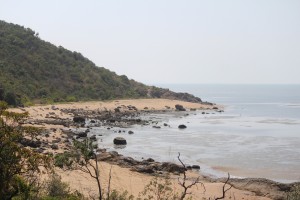 John chose Shelly Cove as our site because its sheltered position makes it a friendlier environment for a greater range of sandy shore animals than the more exposed Pallarenda beach. Pointing out how thick mud close inshore at the northern end gave way to ridges of coarse sand to seaward, John explained how most of the sediment has come from rivers to create the sandy beach we were walking on. To some extent this sediment may be increased by erosion from the hill which rises behind it, and also from the access track.  Later in the afternoon, as we returned to our cars via the beach, he commented how the sand just north of the old boat ramp had built up quite recently. This reinforced the message that shorelines are constantly changing due to winds, waves, tides and other factors, some of them man-made.

John stressed that the richest pickings as regards marine life are to be found in the intertidal zone, in or under sand or rocks, and emphasised the special adaptations required by marine life forms in order to deal with life spent in a saltwater environment. While we may occasionally see terrestrial animals, like wallabies and cassowaries, venturing onto shorelines and beaches, the area below high-water mark is not, and can never provide, a natural home for them. 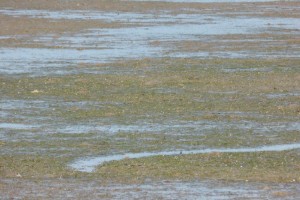 While this excursion focussed on the zoological, the green tinge covering the newly exposed sand drew our attention to the seagrass that brings dugong to this area – with their feeding trails clearly visible. Four species of seagrass occur here and while there is still much to learn about the factors that influence its variable growth (and a JCU monitoring device was nearby) its essential requirements are sunlight, sediment and stability – and it’s the need for sunlight that demands good clear water quality.  John noted that, as well as providing essential food for dugong and green turtles, it also produces organic material for sediment feeders. Several specimens of algae were also found and John explained how calcareous skeletons of some species contribute organic calcium carbonate to the predominantly inorganic granite sand. Other species, often drifting in from elsewhere, will also form part of the organic component of the sediment eventually releasing primary nutrients into the sea. Mention of algae provoked the kind of discussion that makes my head spin – ie when is a plant not a plant? And if it’s neither plant nor animal, what is it? Sorry, I am just not going to go there! 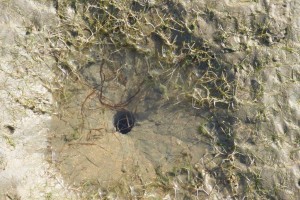 Dugong trails were not the only signs of creatures that had passed across the sand or that lay beneath. Shallow but distinctively shaped depressions showed where a stingray had disturbed the sand to expose prey detected just below the surface. Deeper craters, found in pairs, were the entrance (head-shaft) and exit (tail-shaft) holes of stomatopods, or mantis shrimps. Narrow winding trails across the sand indicated to John the presence of sand dollars (Arachnoides placenta) just beneath. To prove his point he scraped approximately one square metre of sand into his sieve which, with the sand rinsed away, revealed no less than 16 individuals of varying sizes. A circlet of what looked like tiny pearls in the sand surprised us all when Mike inserted a finger into the centre and was squirted by fine sprays of water – the defence mechanism of the sea anemone Actinoporus elongatus. Less elegant than these “pearls”, but no less fascinating, were the coiled piles of faeces left by a hemichordate (acorn worm), probably Ptycodera flava, at the entrance to its u-shaped burrow.

And of course everywhere we looked around us were the little moving shells on legs – the ‘rented’ homes of peripatetic hermit crabs. John amused us with tales of the mutual bickering and bullying that goes on if you put a whole lot of these in a tank together. Clearly ‘keeping up with the Joneses’ reaches a whole new level – evict the Joneses and move in yourself – if you’re a hermit crab. Members of the genus Diogenes occur here, named for the eccentric figure from ancient Greece who lived in a barrel. Free-ranging crabs (for want of a better term) included Scopimera inflata, or sand-bubbler crab, and Charybdis sp., a swimmer crab. The former are responsible for the myriad little balls of sand which spread out around their burrows – into which, as we observed, they can disappear in an instant leaving no sign of either crab or burrow. You can see a lovely David Attenborough video clip of these crabs at work here. 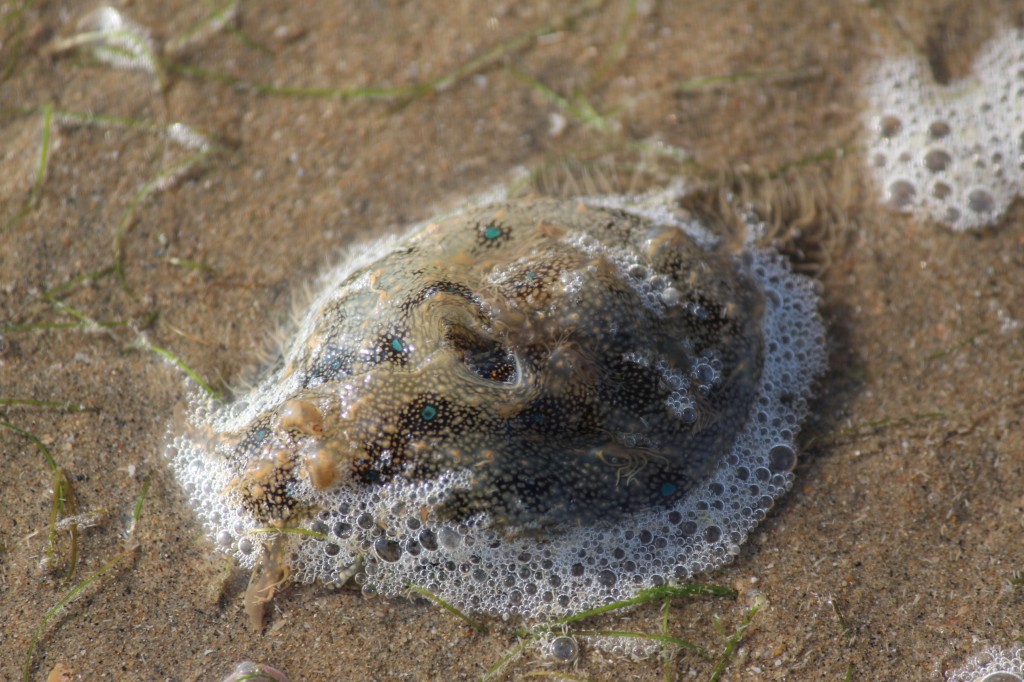 Among some of the many other animals discovered were two species of the oddly-named and much-photographed sea-hares (gastropod molluscs in the family Aplysiidae) one of which squirted purple ink when disturbed; a group of small sea snails (Planaxis sp.) living on top of the rocks where they graze on microalgae; two species of the predatory Polinices, commonly known as moon shells and three species of the scavenging Nassarius or dog whelks; a polychaete worm, Diapatra sp.; two types of sea anemone; and brittle stars in the Ophiuroidea family. 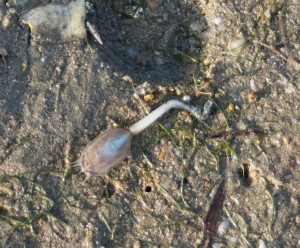 Right at the tail-end of the day and almost by accident John made his most exciting find, when he unearthed two brachiopods, Lingula sp. It had been so long since last seen on this beach John believed they had gone. Not so. Some of us remembered finding them on our Geoffrey Bay excursion in 2014 which you can read about here.

Please also check out our additional post, Shelly Cove Fossickings, which has a table of species found with additional information about many of them and more photos!!

Despite the sultry weather, once we were at Shelly Cove we had the benefit of the sea breeze that kept us cool for the three hours that we were at the beach. It was a fascinating afternoon and John’s trademark enthusiasm, as well his great store of knowledge, kept us all engaged and intrigued. These low-tide walks are always extremely popular and this year, even without any outside advertising and despite several of our ‘regulars’ being away, we still had a crowd of twenty eager fossickers. 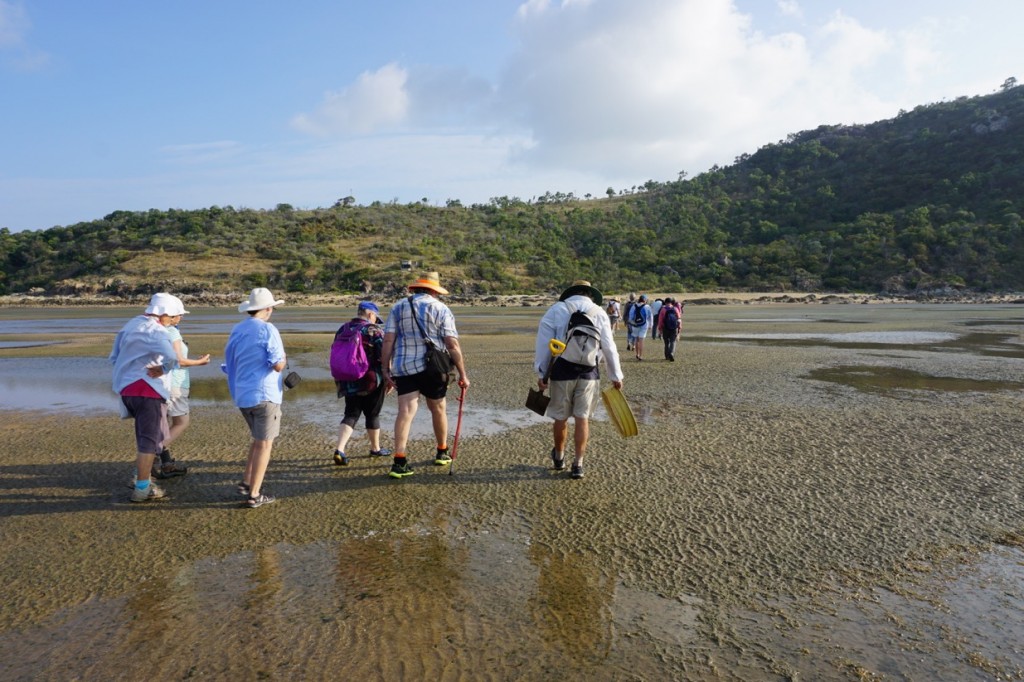 Acknowledgements: A round of applause and sincere thanks to John for once again being our guide, and especially for all the work he did afterwards in identifying species and editing my report. (Any errors remaining are mine alone).

Thank you also to all who submitted such a wealth of photographs. Please check out those that could not be included in these posts- they can be accessed via this link. They include some terrestrial plants (and at least one bird!) and are arranged according to the photographer: JB=Jo, JH=Julia, LD=Liz, MC=Melissa, MF=Margaret. Please note that the copyright of all images resides with the individual photographer. 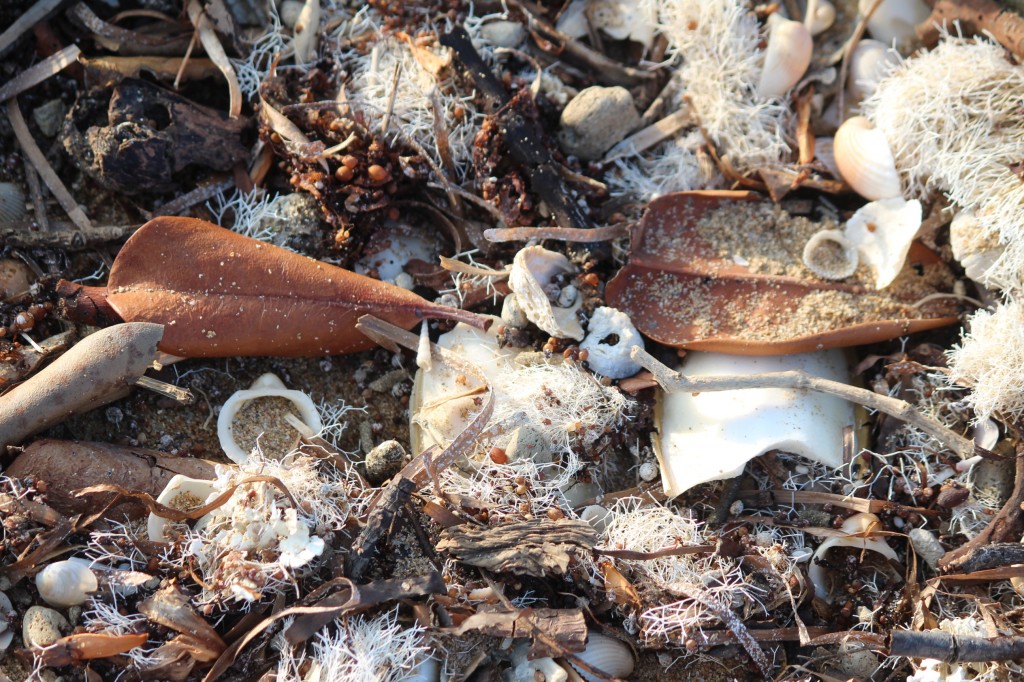