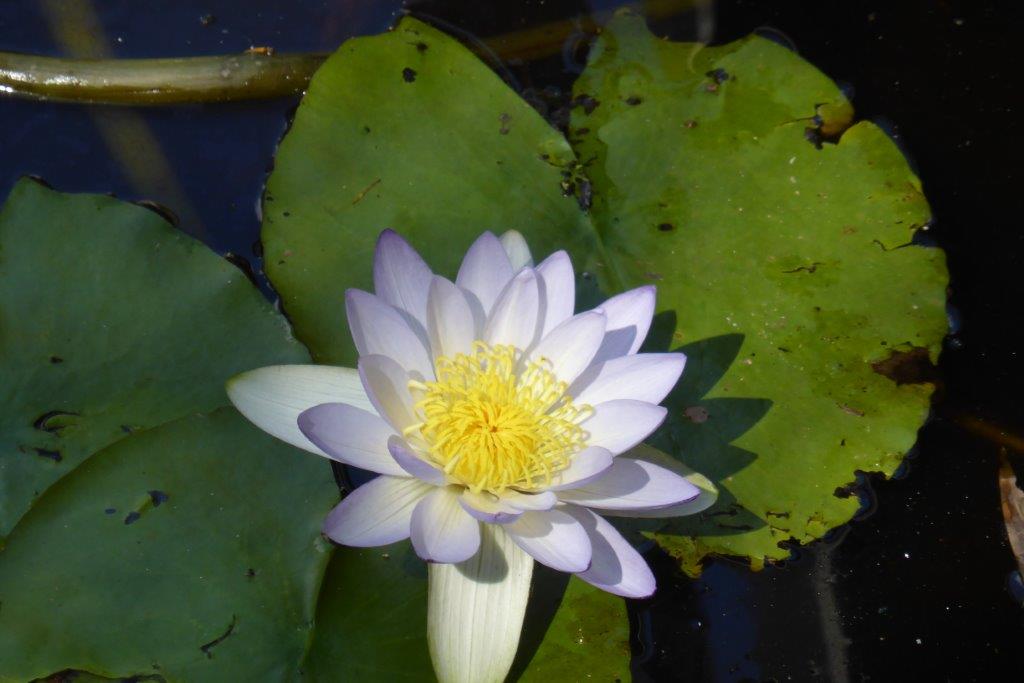 What a crowd! 26 bodies, including children, made the most of a stunningly blue and gold day on Magnetic Island last month. There were so many of us disembarking from the ferry that I worried we might not all get on the bus – but we did, just! And when we got off the bus near Bungalow Bay we found more people waiting for us. It was lovely to have Magnetic Islanders Annie and Su join us, as well as our newest member Robin, and former long-time islander, ex-pat branch member and birdwatcher of note, Jo. 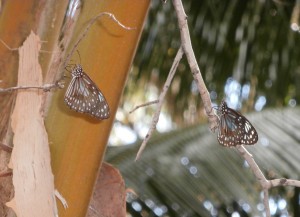 Our first excursion was to the “butterfly forest” bounded by Horseshoe Bay Road, Heath and Dent Streets which lies only a few hundred metres back from the beach. This is the best known of the island’s several overwintering sites favoured by the blue tiger butterflies and was where, less than two weeks earlier, in a swampy area of Pandanus cookii (Screw pine) these blue-speckled butterflies danced in clouds around my head. Alas, that was before two days of high winds and heavy rain swept the region and, as I feared, there were no butterfly clouds this time. It was still worthwhile making a circuit of this area which most of us agreed we had taken very little notice of before. As well as butterflies – yes, there were a few and some people got photographs! – this patch of bush plays host to a small colony of black flying-foxes (Pteropus alecto) in a stand of paperbarks, and to the orange-footed scrubfowl – the smallest of our megapodes yet the builder of the most enormous mounds. Two mounds were found, one clearly showing signs of recent activity, and a parent bird was glimpsed skittering through the shadows. An olive-backed oriole attracted a lot of discussion over its identity – finally distinguished from the similar figbird by its distinctive call, pink beak and red eye. Several people noticed the intrusion of exotics – including traveller’s palms, mother-in-laws tongue, agave and periwinkle – which are getting out of control, probably after being dumped as ‘garden waste’ from nearby houses. They have the potential to destroy this little patch of forest if unchecked. 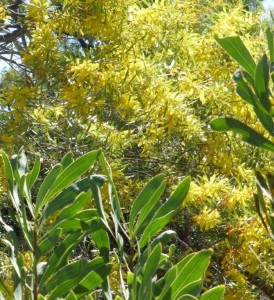 Crossing over Horseshoe Bay road we walked a short distance to where a sandy track leads off parallel to the lagoon – this at least had been considerably freshened up by the previous week’s rain. This is a favourite walk of mine though often overlooked by visitors as it is not signposted. The air was sweet with the scent of Townsville wattles (Acacia leptostachya) which were flowering all around us. Interestingly on the island this wattle grows much taller than the low-spreading shrublike form more usually seen on the mainland. A group of magpie geese, a great egret and purple swamp-hen were sighted among the bulkuru sedge and smaller birds darted around in the dune vegetation. As we reached the boardwalk and walked across its length to the opposite side, former long-time island resident, Jo Wieneke, commented sadly on how many young melaleucas had grown up in what used to be open water, creating their own forest in the body of the lagoon, and making it much less attractive to waterbirds. A solitary Pacific black duck was the only bird seen among the crowded trunks. 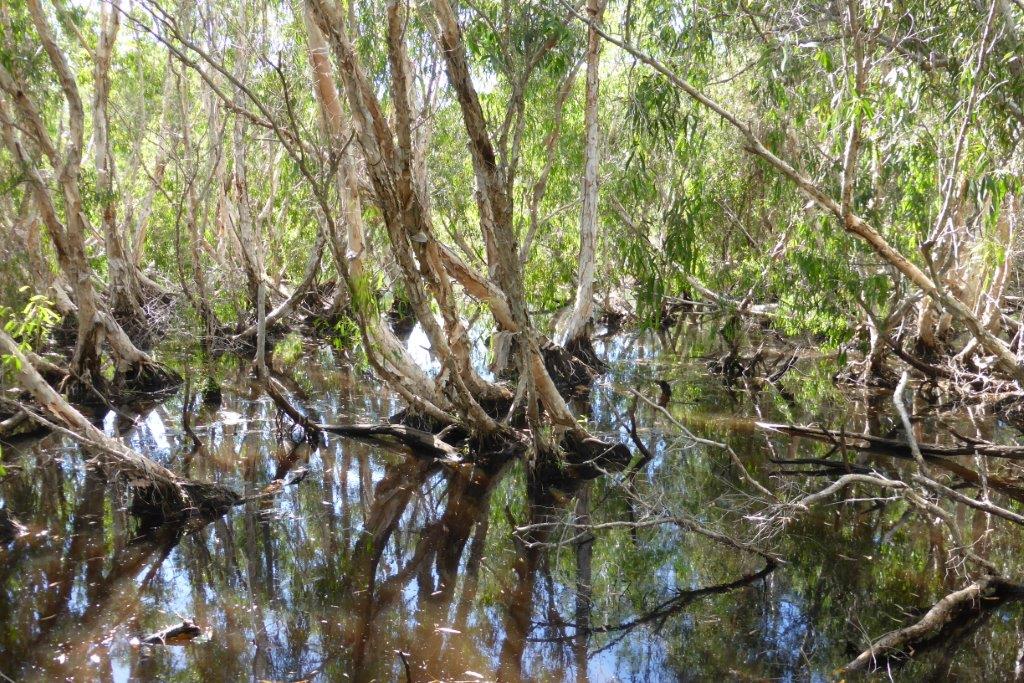 Too much of a good thing? Paperbarks crowd a once open water stretch of the lagoon. Photo Margaret Flecker.

Other plants seen in this area included a native passionfruit (Passiflora aurantia), hop-bush (Dodonea sp.), an orange mistletoe (Dendrophthoe glabrescens), razor grass (actually a sedge, Scleria sphacelata) and an impressively tall grass, Phragmites karka, which was in flower. If you want to know more about any of the above plants or others found on the island do visit this excellent website which is based on a series of books by island resident, Donald Simpson, and constantly updated with recent photographs and information. And don’t forget the Walk and Talk trip to Florence Bay on September 10th with Greg Calvert and QPWS ranger – details will be in our August update, out soon!! 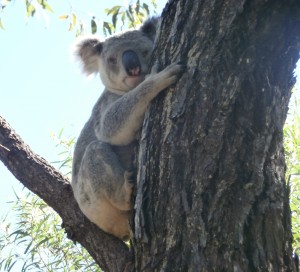 This one was awake! Photo Christine Mair.

The picnic area behind the beach was a good place for lunch (and ice cream indulgence) after which those with less time to spare headed back for the return ferry. A smaller group, keen for a bit more walking and a glimpse of koalas, set off along the Forts walk. Here the dominant colours of the day were even more striking with the brilliant blue of sea and sky, the golden wattles along the track and the hillsides splashed with the yellow flowers of the native kapok (Cochlospermum gillivraeii). Am I wrong in thinking these were flowering at least a month or two earlier than usual? Apart from these wonderful views and a wedgie soaring overhead, our reward came with not one but four koalas, one with baby! One in particular – perhaps the designated show-off for the day – posed obligingly for cameras while, in a nearby tree, Mum showed laudable reticence in shielding her infant from the prying paparazzi.

The bird list is below and do take a look at the folder of nearly 40 photographs of plants, wonderful landscapes and (of course!) more koalas contributed by Alison, Christine, Denise, Margaret and Su which can be viewed here.  Thanks to all who shared their photos or their knowledge, or both! 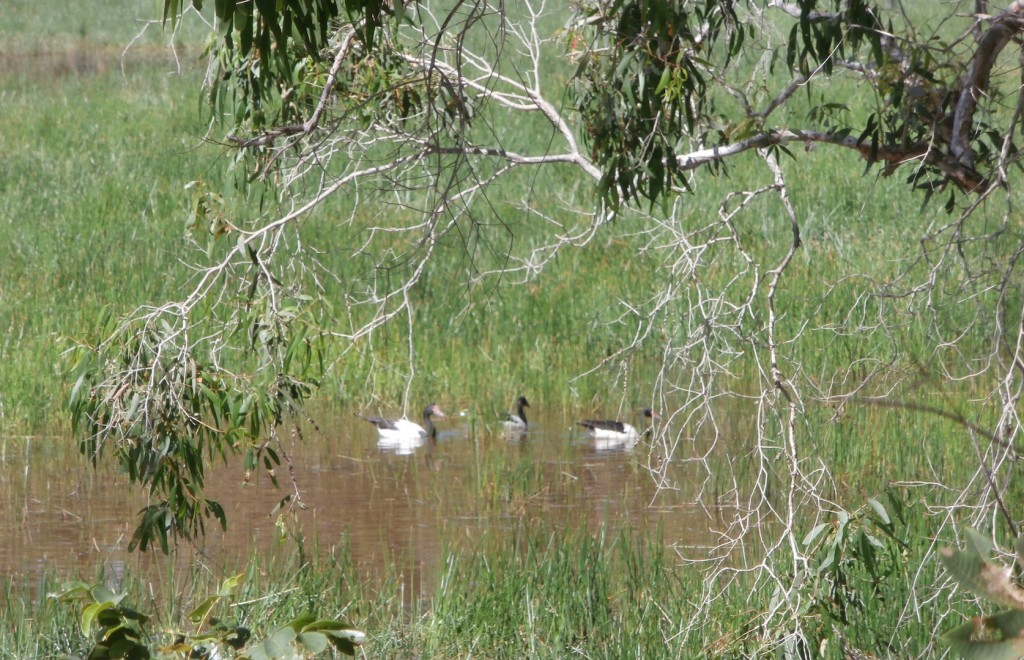