SUNDAY 24th JULY: MAGNETIC ISLAND FIELD TRIP – butterflies, lagoon, koalas anyone?  If you are not one of those lucky people actually living on the island, make sure you are at the ferry terminal in plenty of time for the 8.45am ferry. 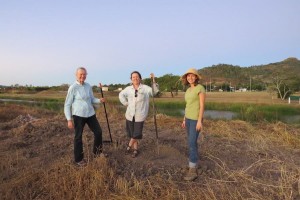 Julia, Bernadette and Maree get busy at Mundy Creek.

AND ONE FOR 2017? Member Jon Luly recently stumbled upon a wetland area, alive with several species of ducks and other waterbirds, in an unexpected place. If we can get ourselves organised for a weekend trip next year it could make a change to venture away from the coast and head west. Read about it here…

KENNEDY BAY WALK: If you haven’t already seen the write-up of last month’s walk, you can read all about it here. Don’t forget to click on the link to a folder containing all the photos contributed after the trip. Next time we’ll try to do the walk in sunshine! 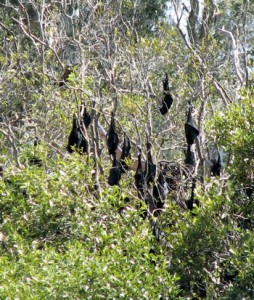 HAS TCC GONE BATTY? After all our work within the community and with TCC on management of urban flying-fox roosts and the production of interpretive signage for the Palmetum, it was a shock to learn on 20/6 that the Council was to begin dispersal attempts of the small colony which had re-established at the Palmetum after a 7 week absence. Bemused by this apparent sudden change in direction from the previous clearly-articulated policy of “leaving them alone” we immediately contacted senior staff at Council’s Integrated Sustainability Services (ISS) seeking justification and clarification – to be honest without receiving consistent or even coherent responses. We share the desire to remove the fencing which has kept much of the park closed to the public for far too long, as we have been repeatedly asking for this. We also accept that some of the rain trees in the park, attacked by longicorn beetles, need to be trimmed where they overhang pathways – but we do NOT believe that persistent dispersal action is necessary for either.

NQ Wildlife Care and Wildlife Queensland are supporting each other on this matter and, with a few exceptions, two or three of us have been present at 5am every morning for the last month. Our purpose is to monitor the actions and procedures of Council staff to ensure minimal stress, to assess the population of the colony (fluctuating between approx 100-500) and to ensure that there are no infants, juveniles, heavily pregnant or lactating female bats in the roost. If Little Reds, whose females are carrying young right now, move into the roosts or when the Blacks are close to giving birth in a few weeks time, we expect Council to honour the promise to leave them undisturbed. The dispersal activity, involving flashing lights and banging of metal bins,  lasts for about 10 minutes during which time most of the bats leave for other sites but so far have not been “nudged” to other areas of the park, nor dissuaded from returning the next morning.

STRAYING COWS AT OLLERA CREEK: Last month we reported on the situation where cattle were straying onto the beach from 2 adjoining properties north and south of Ollera Creek, and almost certainly accessing an unfenced TCC nature reserve where we had been undertaking fauna surveys. News that the landholder had been instructed to fully fence all his property boundaries was both reassuring and worrying. Keeping cattle out of the reserve and off the beaches is a win for native vegetation and nesting wildlife but, unless the fences are wildlife friendly, birds and mammals will pay a huge price when they become tangled on barbed wire.

We have supplied ISS staff with recommendations and illustrations of wildlife-friendly fencing, as well as advice from our friends further north. On the Cassowary Coast the regional council works with farmers and local groups, including WQ, to promote the use of such fencing and there are examples of its effectiveness in containing cattle. We will continue to monitor this situation as best we can.

MANAGING PROTECTED WILDLIFE IN QUEENSLAND. Queenslanders are invited to have their say as part of a review into the management of the state’s protected animals this month. You can read the preliminary information here and then go to the discussion paper [Links expired] which outlines the current management of protected animals in Queensland, identifies some issues with the framework, and suggests options for reform. Closing date for comments is 29th July.

THE BUZZ ON BEES – What do you know about bees? Do you care that they are declining around the world? Do you realise what that might mean for the hundreds of thousands of flowering plants, not to mention our fruit and vegetable crops, that depend on bees for pollination?  Or for our honey supplies? Learn more from the Golden Bee, a collective of imaginative and creative people who aim to build a global swarming of awareness about bees and hives of activity to protect bees and the benefits they bestow on our world.

LOSING OUR DEFENCES – We all know the immense value of mangroves in providing nurseries for fish, prawns and crabs, filtering agricultural run-off and protecting our shorelines from storm damage and erosion. But this recent news report of the death of a huge area of mangroves along a 700km stretch of the Queensland and Northern Territory Gulf coast shows that these protectors have no defence against the juggernaut of climate change. JCU’s world-renowned mangrove expert, Dr Norm Duke, described what he found as the most shocking example of mangrove die-back that he had seen anywhere in the world. If you were shocked by recent footage of coral reefs devastated by bleaching, steel yourself for these images.

POST ELECTION – WHERE IS THE ENVIRONMENT NOW? We can only wait and see. With a new federal Minister for Environment and Energy, Josh Frydenberg, and a Prime Minister who, even if he fully recognises the urgency of addressing climate change and other environmental issues, has had his authority seriously undermined, it is not easy to be hopeful. But one thing is for sure – if any progress is to be made, it is up to us. The most recent WQ newsletter which all members should have received recently in their inboxes or letterboxes, puts it succinctly. Although written in the context of Queensland it is equally relevent to the Federal scene:

Unless the silent majority who care for the environment and its wildlife let their voices be heard, nothing will change.