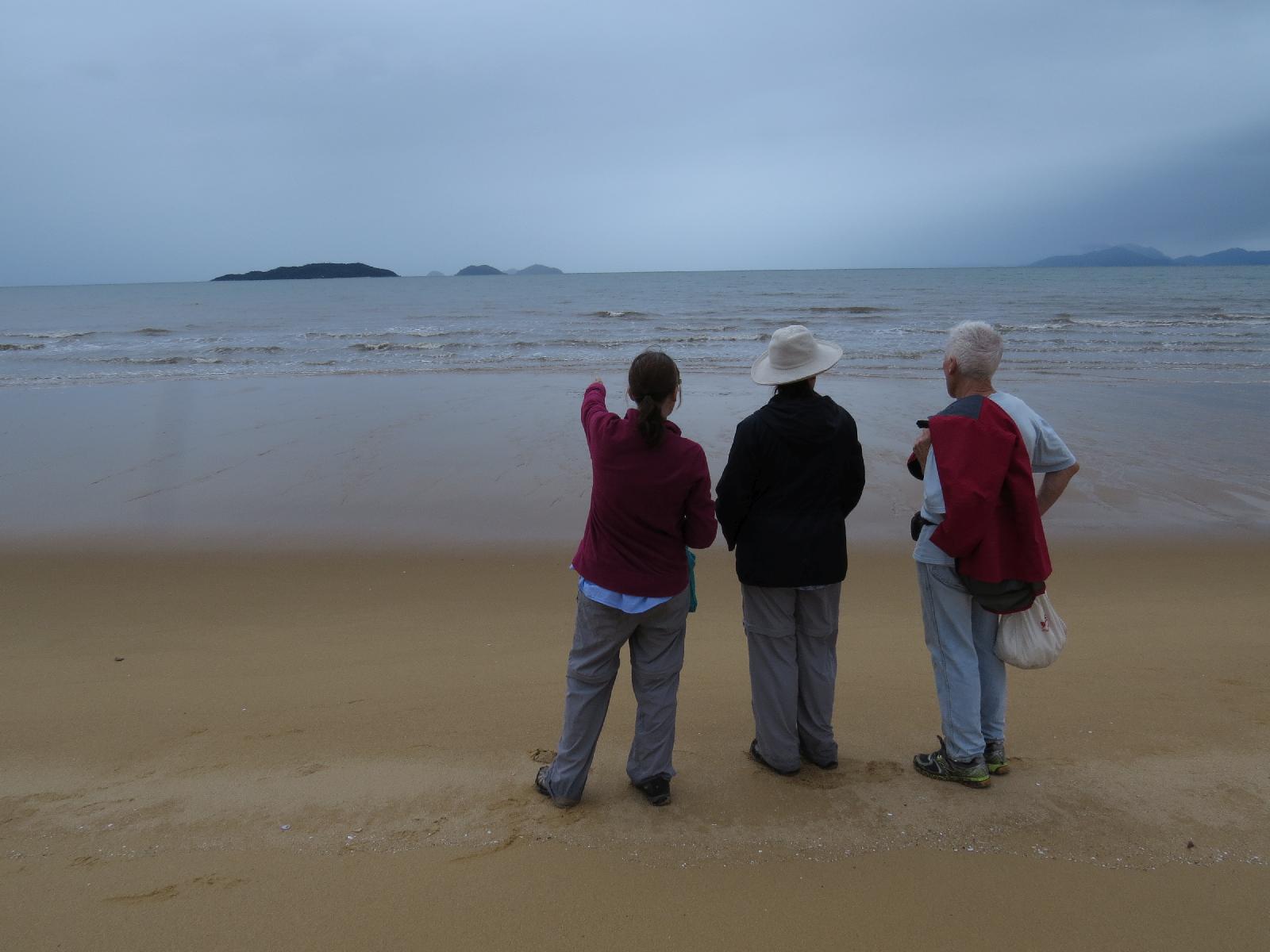 It It says a lot about our recent weather patterns that, since the Townsville Branch revived its program of monthly field trips in 2012, this was the first wet one! But steady overnight rain did not deter the cheerful group of 13 gathered at the South Mission Beach boat ramp early on Sunday morning, with raincoats and umbrellas. It was a special pleasure to meet our newest member, Su Mijic, and to be greeted by Suzy Smith, founder and secretary of the Cassowary Coast and Hinchinbrook Branch who distributed copies of the original track brochure and led the walk as far as Lugger Bay. 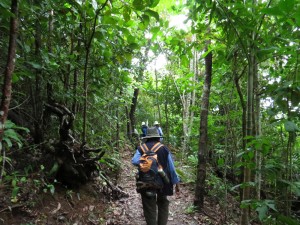 An early stretch of the track. Photo Julia Hazel.

The first part of the walk passes through rainforest clinging to the slopes of the hillside with glimpses through the trees to the rocky shoreline and across to Dunk and the Family Islands. At Lovers’ Beach an attractive sign documents the history of this remarkable track, hand-built thirty years ago entirely by volunteers, over a period of three years – see last photo below. Despite cyclone Winifred, which hit the area during construction, and more recent and severe assaults from cyclones Larry and Yasi, most of the original track has endured and repairs to damaged sections have kept this lovely walk open to all. 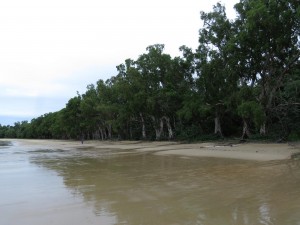 At Lugger Bay the track descends onto the beach where a beach stone curlew awaited us – a gleaming curve of fine sand sheltered by the protective arm of Tam O’Shanter Point stretching out at the southern end. This is a beautiful beach dominated by a tall stand of paperbarks (Melaleuca leucadendra), and beach calophyllum (Calophyllum inophyllum). Near the southern end the track crosses a bridge over mangrove-lined Mije Creek. Running behind the mangroves for a short while, it then climbs up to Morgans Lookout – a good stopping place. By this time the light rain had cleared away and we were stripping off the raincoats and applying the mossie repellent to exposed areas! A bit more climbing led to the highest point of the track before descending to the rocky shoreline traversed by a timber boardwalk. It was in this rocky area that we noticed some brightly coloured isopods scurrying busily about, which turned out to be more interesting than we thought – see photo and note below. We were now near the end of Tam O’Shanter Point and took a sharp right turn to emerge at the northern end of Kennedy Bay. 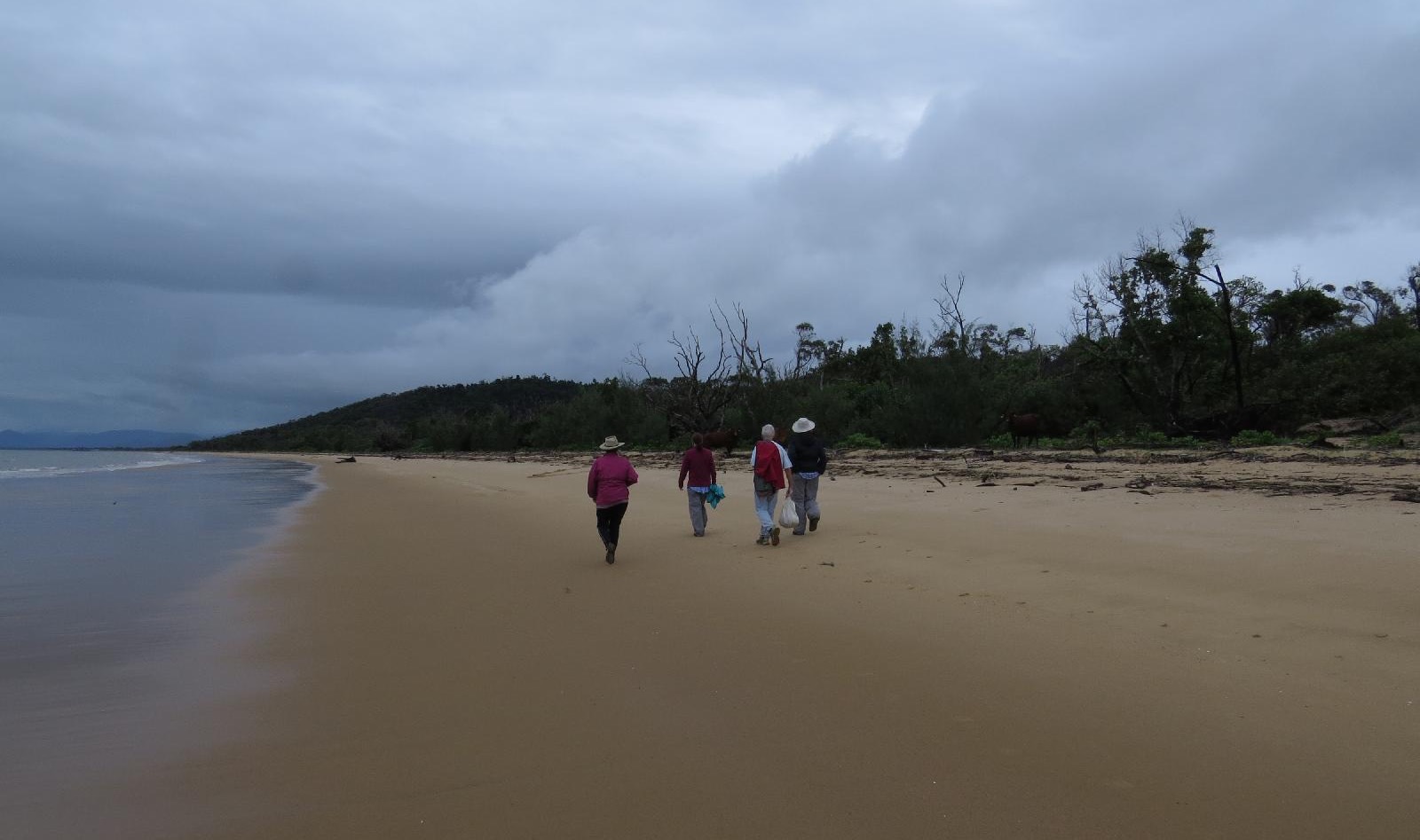 Five years after Cyclone Yasi it was a shock to see the damage that had been done to the foreshore vegetation especially at this more exposed northern end. It was even more of a shock to find a mob of 8 cows (including one bull) on the beach!! The boundary of a cattle property runs very close to the public esplanade on which the track is built and continues behind a section of the beach. The National Park boundary starts further along the beach and extends south to the Hull River. Whether the cattle escaped from the property by accident, through poorly maintained fencing, or were deliberately encouraged onto the beach through a wide open gate, is uncertain. Regardless, cows on beaches can be very damaging to vegetation and nesting birds or turtles, even worse when such access enables them to stray into a National Park. 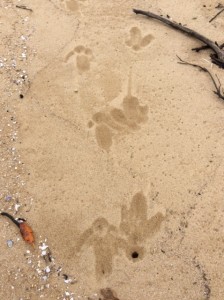 The beach was still a good place to stop for brunch and enjoy the shades of blues and greys which the subdued light cast on offshore islands, mainland mountains and Hinchinbrook’s more distant peaks. Those of us with time to spare defied the cows and enjoyed a brisk walk south trying to imagine what impression it might have made on the young Kennedy and his party when they camped here for nearly two weeks 168 years ago before setting off on their fateful journey. No doubt, like us, they would have watched sea-eagles fly in to the trees and perhaps spotted the tracks of cassowaries and goannas in the sand, as we did.

Returning at a leisurely pace we had time to admire the coastal scenery, even under grey skies; to photograph the beach stone curlews and watch a kingfisher fly to his perch with crab clamped firmly in beak – and to be grateful for that hardworking little group who laboured to build this track against all odds.

Denise, Alison and myself had all travelled up on Friday morning which allowed time for some lovely late afternoon beach walks at Bingil Bay and Garners Beach (special bonus of a cassowary sighting), an evening of “rock flamenco” at the Bingil Bay cafe, and a walk round the Lacey Creek circuit on Saturday morning – all under sunny skies. Monday morning also dawned bright and sparkling and it was sad to leave when the beach, islands and forest were looking so fresh and inviting. Despite Sunday’s showery and grey conditions, feedback from walkers has been all good, and all of us lucky enough to see a cassowary during the weekend felt especially privileged. Let’s hope these forest icons can not merely survive but thrive in an area which is so important to them – but it needs some serious action to control speed limits, restrain dogs and conserve habitat and corridors for this to happen. 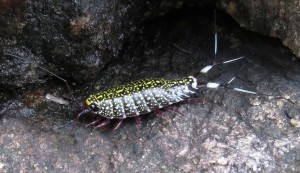 Footnote 1: Julia sent this isopod photo to Niel Bruce at MTQ who identified it as belonging to the genus Ligia, in the family Ligiidae. He commented that the taxonomy of the genus is “in poor shape” but that he had never seen any with that brilliant colour pattern so it may well be an undescribed species. Exciting!

Footnote 2: A report on the presence of cattle, with photographs, was sent to the Cassowary Coast/Hinchinbrook Branch who contacted their local council. The local laws officer reported that she had instructed the landholder to check and repair fences to prevent access onto the track and beach. This prompt action and ready communication with the local WQ Branch is in marked contrast to the difficulty we have had in dealing with the Townsville City Council over a similar problem in the Ollera Creek area. 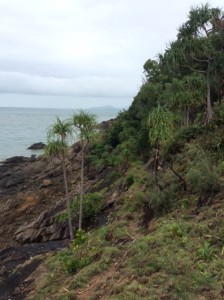 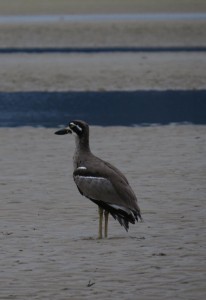 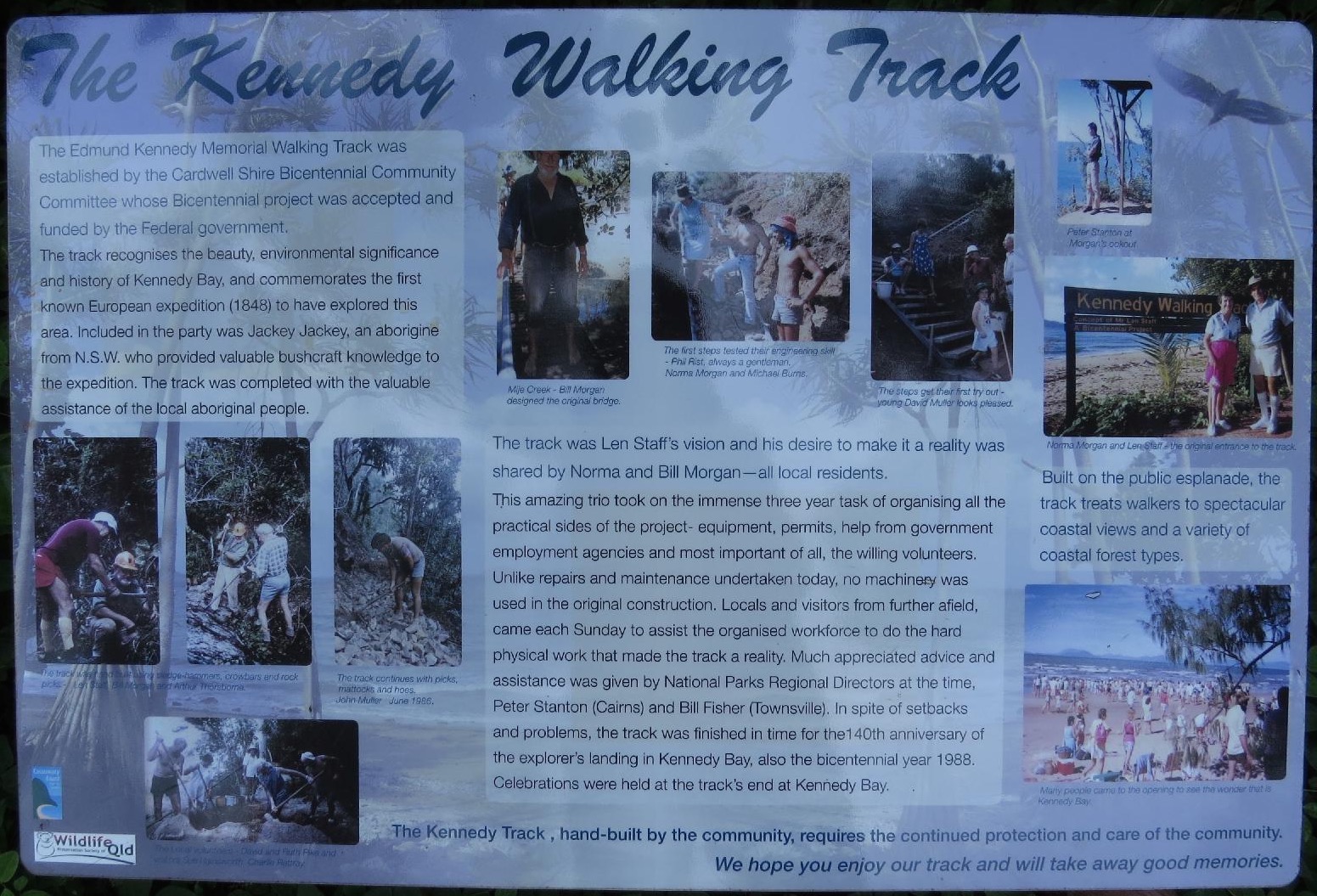 Thank you to Julia, Su and Denise for their photos. Please take the time to view the whole collection which can be accessed via this Dropbox link: Mission Beach. If you don’t have a Dropbox account you may see a screen inviting you to join up or log in, but you don’t have to do this – just click on “No thank you – view only” and then scroll through using the arrows. They include some particularly lovely plant photos … and a cassowary!!