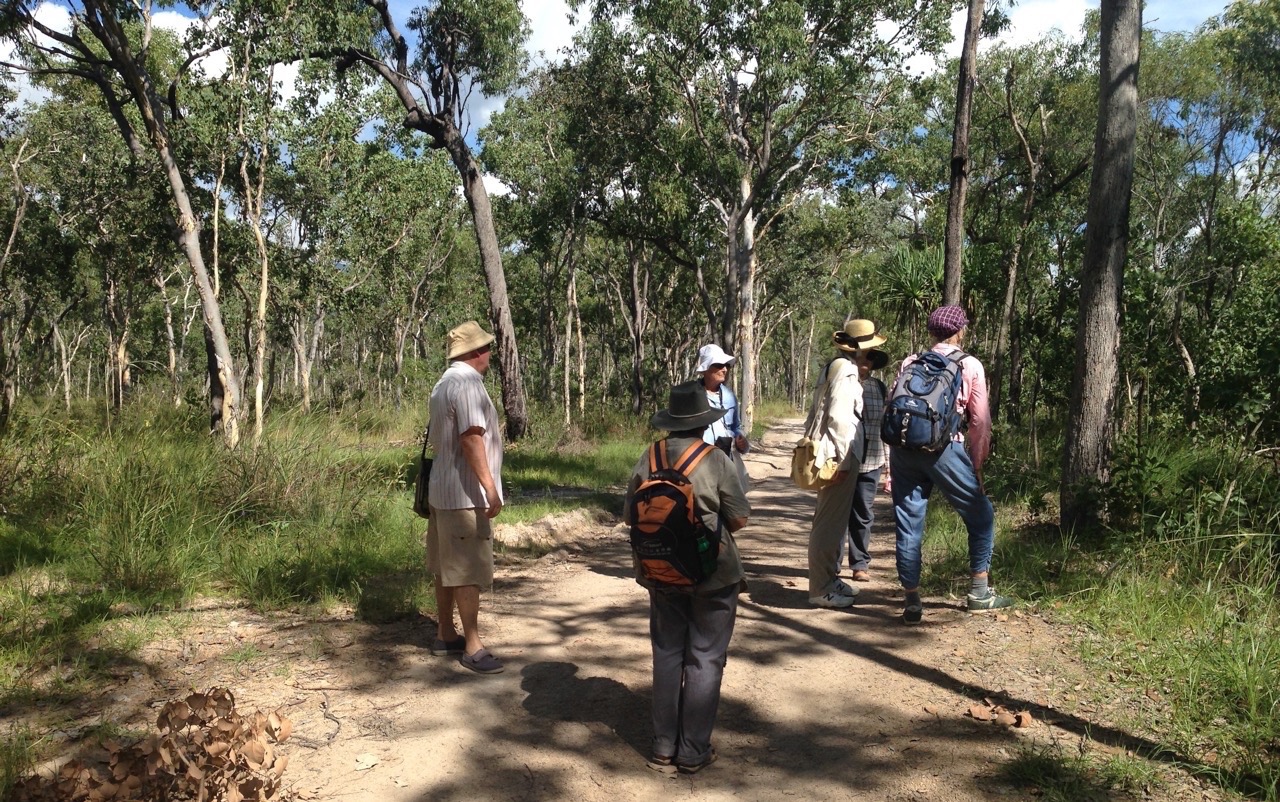 Away from wedding traffic(!) we spread out to examine the vegetation

Last month’s trip was probably the closest we’ve come to gate-crashing a bush wedding on one of our field excursions. Only later did we realise the significance of a couple of white ribbons tied around a tree at the start of the track! 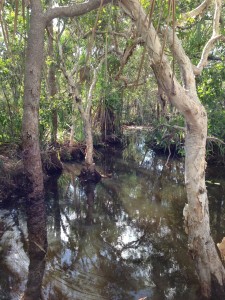 Leaving our cars just off the Toomulla Beach road, we headed north along a wide dirt track obviously well-used by 4WD vehicles. Being the Sunday of a long weekend we were frequently obliged to move over to the side of the track to allow them to pass. It was some time before we realised that most of the traffic was headed towards the beach nuptials! Thankfully, before being mown down by the bridal party, we were able to take a right-hand turn that led us along a quieter track behind the beach and headland, and which ultimately returned us to our cars.The fine detail provided by Google Earth and Queensland Globe maps, copies of which Beth helpfully brought along with her, ensured that we were in no danger of getting lost even though we were following tracks completely new to us.

For the first kilometre or so we were walking the boundary between part of the Paluma Range National Park (formerly Clemant State Forest) on our left and state land on our right. As we turned east and then south we moved away from the National Park and were walking through an area defined on Queensland Globe  as “State Land Saltwater Park” – one hopes this quite special area of native bush will not be lost to real estate or other development. 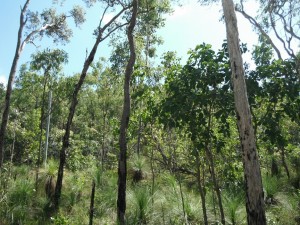 Healthy young grass trees near the start of the walk.

Even though birds were remarkably absent, or at least silent, the bush surrounding us was full of interest and remarkably free of weeds. In a few weeks when the golden grevilleas (Grevillea pteridifolia) burst into their brilliant orange flowers, and the broad-leaved paperbarks (Melaleuca viridiflora) display splashes of scarlet blossom among their predominantly greenish-yellow flowers, there will be a feast for the nectar-lovers. Brighter greens among the vegetation came from the grass-trees, Xanthorrhea johnsonii, and many specimens of quinine bush, (Petalostigma banksii), some bearing a few of their bitter-tasting yellow fruit. (See below for the interesting seed dispersal method of a related species of this plant).

Among the taller trees were poplar gums (E. platyphylla), some fine old bloodwoods (Corymbia clarksoniana) and narrow-leaved ironbarks (E. crebra). Three species of acacia were noted, A. simsii,  A.holosericia and – the only one flowering – A. flavescens.  Other plants identified were the “soap tree” or red ash Alphitonia excelsa, also in flower, and at least one specimen of Lophostemon suaveolens. 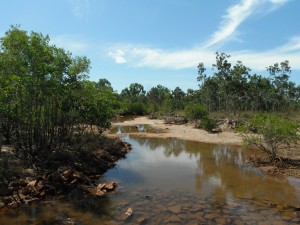 Turning west to complete the loop back to our cars, we found ourselves getting into a more saline environment and crossed the second of two small creeks, this one mangrove lined. The map showed an area of saltpan over to our left which by then we were too tired (and too hungry) to explore! We took a short drive to the end of the road where we ate lunch in the parkland shaded by tall paperbarks, eucalypts and palms. Part of this area has been landscaped with exotics as well as the original natives, but mercifully, unlike many beachside suburbs, a wide stretch of dune vegetation behind the beach has been well protected and cared for.

Tracks of a small goanna, and wallaby footprints, were spotted on the sandy surface of our route behind the headland but the animals themselves remained out of sight. Small birds noted were brown honeyeater, white-throated honeyeater, varied triller, leaden flycatcher, rainbow bee-eater and bar-shouldered dove. At our lunch spot the trees were full of cheerful figbirds while the brilliant turquoise of the Ulysses butterfly and vivid green of a Cairns birdwing (accompanied by his larger, though less colourful, mate) danced in the dappled sunshine.

Photos are by Liz (courtesy of Alison’s phone) and Denise – click on each to enlarge. 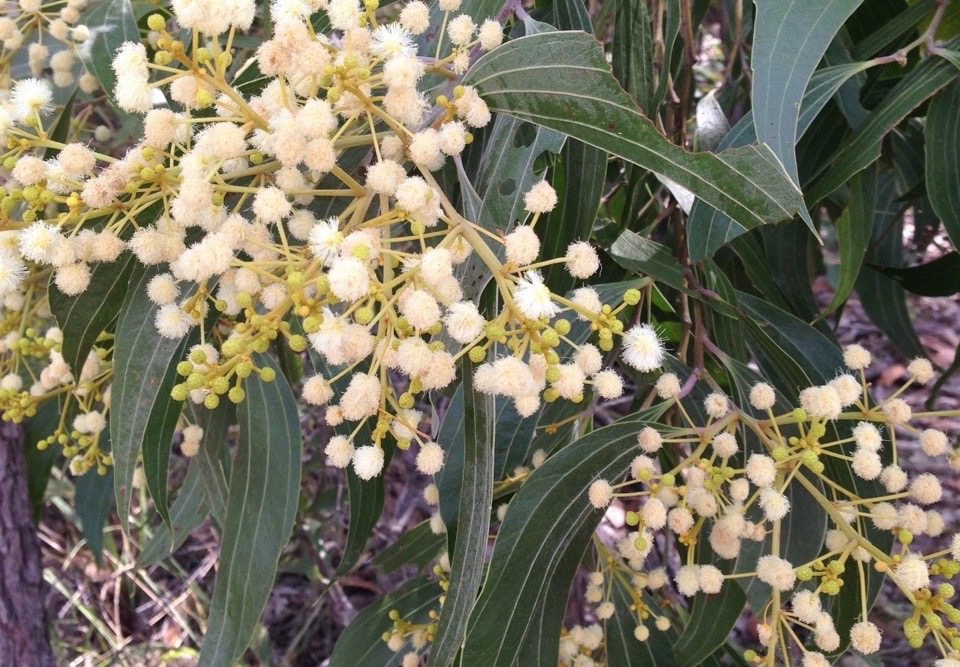 *Beth told of us of a remarkable, and possibly unique, three-stage seed dispersal mechanism employed by another species of quinine bush (P. pubescens):