The Cairns and broader environmental community is in a state of excitement over the recent discovery of two separate mangrove species. 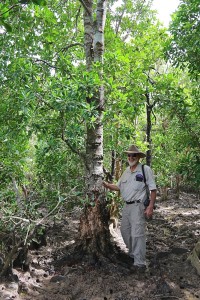 Bruguiera cylindrica towers over an admirer.

Local naturalist Hidetoshi Kudo has discovered, in Trinity Inlet, one range extension of mangrove – Bruguiera cylindrica previously only found north of Cooktown and, more extraordinarily, the completely new discovery of around 50 Haines Orange Mangrove trees, Bruguiera hainesii, previously unknown on the Australian land mass and with only around 200 mature individuals left in the world.

It was known previously only from Singapore, the Malay Peninsula and a couple of isolated locations in New Guinea. This species has been listed as Critically Endangered by the International Union for Conservation and Natural Resources (IUCN).

“I was in Chinaman Creek looking for another mangrove species when I stumbled on a tree with very different flowers,” said Mr Kudo. “I then came across another tree that was also different in appearance to the rest of the mangrove species around the area. It was a real stroke of luck that led to these two discoveries.” 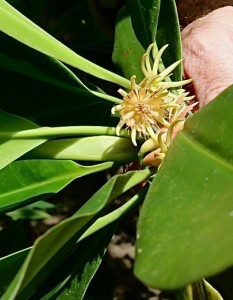 Said Dr Duke: “The mangrove discoveries are really quite extraordinary especially in such a populated and well visited area. We are talking about a group of plants that are relatively easily identified – and for the most part relatively common. The findings are extraordinary also because so many mangrove experts have studied Trinity Inlet, myself included, without noticing these two extra ones. That is remarkable!

“This has even greater importance when you consider the Red List status of Bruguiera hainesii and its need for Environmental Protection and Biodiversity Conservation (EPBC) listing. This will be of particular significance in adding greater appreciation and value to Trinity Inlet mangroves, and for the better protection of fragile wetlands everywhere. The threats are ever present and growing – from cutting, clearing, water quality deterioration, and changes to hydrology and pollution.”

Dr Duke went on: “I think it is really important to note that the power line access corridor cuts right through the new species stand and this reinforces the need for immediate protective status of these newly discovered rare species.” 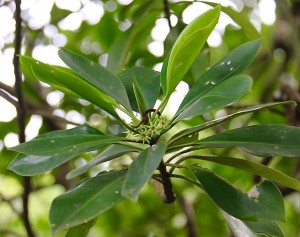 Mr Kudo is very modest about his discoveries and what is perhaps one of the most exciting modern day botanical findings in this country. He has submitted an article for publication to the Nth. Qld. Naturalist Journal for B. cylindrica and together with Wendy Cooper and Dr Duke will submit an article about the joint discoveries to the Austrobaileya Journal.

“In addition, many of the Bruguiera hainesii, are not small,” noted Dr Duke. “One tree has a stem diameter of more than 60 cm which means the species has been there for between 100 and 200 years.  These new plants are not newcomers but have simply been missed by all previous surveys!”

CAFNEC President Denis Walls concluded: “One of the significant outcomes of discoveries like these is their importance in drawing attention to the incredible biological diversity that exists in Far North Queensland, much of it still little known to science, and our obligation to protect it at all costs. Discovering 50 Bruguiera hainesii trees in Cairns adds an astonishing 20% more to the known world population” 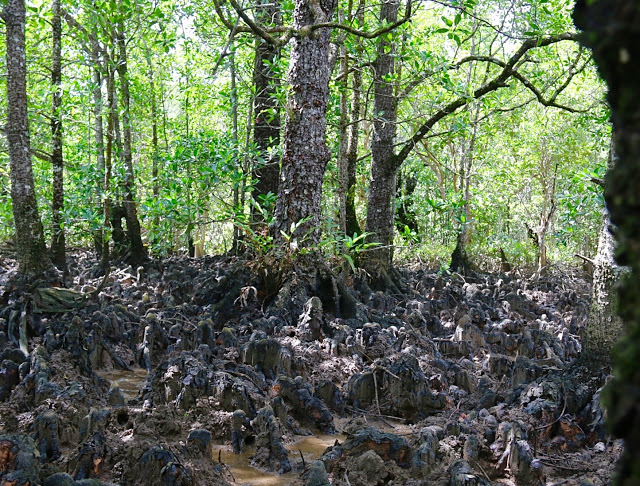