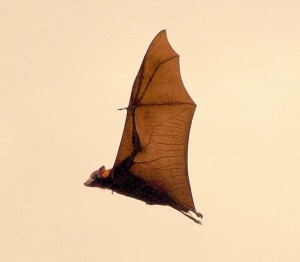 AUSTRALASIAN BAT NIGHT will be celebrated at the PALMETUM on FRIDAY 22 APRIL from 5.30 to 7.30pm (approx). Please come along to watch the spectacle of the fly-out under a full moon! Moonrise is just after 6pm and there are few sights more special than watching our beautiful flying-foxes pass across the face of the moon at its peak. Certainly an opportunity not to be missed for keen wildlife or nature photographers.

The evening will include interpretive talks, walks and literature. This is a joint activity co-hosted by ABS, NQ Wildlife Care, Wildlife Queensland, NQCC and NQ Dry Tropics.

Our APRIL FIELD TRIP has been re-scheduled. The date is now SUNDAY 24th APRIL (not Sunday 17th as previously advertised) and the destination will be Toomulla, to our north. We apologise for the changes which arose due to an unfortunate clash of dates and a mosquito plague of humungous proportions at Mt Elliott.

SUBMISSIONS on the Vegetation Management Act re-instatements – aimed at restoring the tree-clearing controls axed by the Newman government – are due on 25 April. Please write a short letter to the parliamentary committee supporting the proposed changes in this bill. Our recent post on tree-clearing can provide you with some key points. I make no apologies for “hassling” on this topic, it is far too important to put aside and hope “someone else” will do it. We are the “someone else” and if we, who care about wildlife and the natural world, do not speak out, then who will? 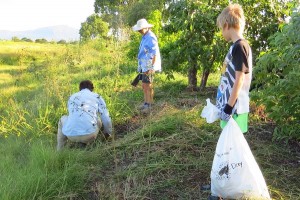 The next MUNDY CREEK Landcare afternoon will be on SATURDAY 7th MAY 4-6pm. I had a great time earlier this month helping to uproot feral grasses and the yellow-flowering weed Sesbania sp. Late afternoon is a perfect time to be at the creek with a sea breeze and lovely golden light on the grasslands and Castle Hill backdrop – and there are some interesting birds about too. Seen recently among the golden headed cisticolas, have been the tawny grassbird, Horsfield’s (or singing) bushlark and chestnut-breasted mannikin.

And while on the subject of weeds, please see our recent post on Sagittaria platyphylla and keep a lookout for it if you are venturing near wetlands or rivers.

BARRIER REEF? In a very short space of time our screens have been filled with poignant images of the Great Barrier Reef’s exquisite beauty and diversity and its tragic decline. Last Sunday’s opening episode of David Attenborough’s masterly documentary focussed on the Ribbon Reefs which stretch for 80kms along the coast off Cooktown. Until very recently these and other reefs in the far north were considered to be in almost pristine condition. But just a few weeks ago came the shocking news that 95% of these reefs had suffered severe bleaching and that only 4 out of 520 reefs surveyed were undamaged. Meanwhile our Federal Environment Minister plays the illusionist trying to pretend that Attenborough’s series shows there’s nothing much wrong after all – for which he was roundly rebuked by the series’ producer. Read this news report, take a look at these images and consider this moving plea from Sir David Attenborough. If you feel the same anger and despair shared by so many of our marine scientists, tell our Prime Minister. In the words of Bob Irwin: It’s our reef, but we’re going to have to fight for it.

ANDERSON GARDENS WALK: Our March field trip attracted an excellent crowd. You can read about it here and view some of the lovely photographs provided by Julia and Malcolm – with an option to see many others that could not be fitted in.

ORGANISATIONAL MATTERS: Our AGM was held on 3rd April. Your existing committee was elected unopposed (my longed-for replacement as president having failed to gallop up on his or her white charger) and the informal planning group welcomed Trish Pontynen as a new member. The “illustrated edition” of the annual report can be viewed here.  Meanwhile our head office endured the upheaval of moving to the inner-city suburb of Highgate Hill after many years in their William Street premises. Temporary loss of internet connection meant branch blogs were unavailable for a spell – apologies if you tried to access ours during that time.

ART AND NATURE. Before May 1st do try to take in two art exhibitions profiling the work of some of our wonderful visual artists who draw their inspiration from the natural world, and in so doing inspire many of us to look at this heritage with fresh eyes. At Ingham’s Tyto Gallery (open 7 days a week from 10am-4pm)  Shine features the work of 20 regional artists, many of whom focus on our wild environment – including wildlife artists Isabelle Gair (Townsville) and Daryl Dickson (Cardwell). Bonus extra – take a stroll round the wonderful Tyto wetlands while you’re there.

And at the Perc Tucker Gallery we have a major exhibition, Rivers Un-Cut, by the incomparable Anneke Silver.  The result of three years work, these paintings will blow your mind with their brilliant colours and intricate patterns woven by north Queensland streams and rivers winding their mysterious ways to the sea. Perc Tucker is open 10-5pm on weekdays and 10-2pm at weekends. Both exhibitions close on 1st May.