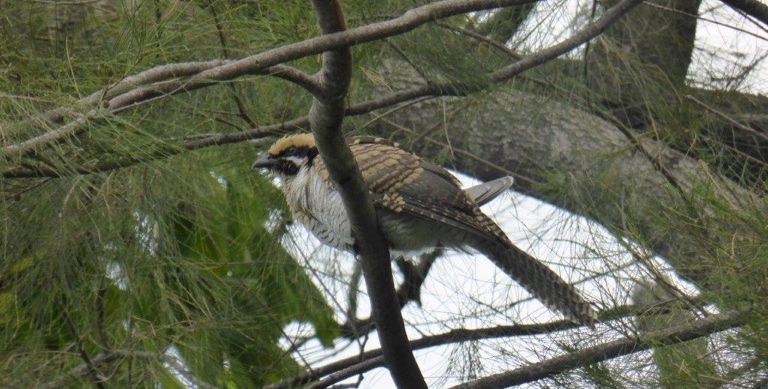 Insatiable appetite – a young koel waits for its next meal. All koel photos by Margaret Flecker.

Some interesting sights and sounds have been reported by some of our members over the summer – more than enough to justify a revival of our What’s in your backyard? series.  Here are two reports, one inner city and one from our northernmost bush and beach suburb. Do click on each photo to enlarge. 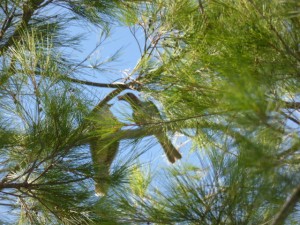 Deep in the heart of Garbutt it’s been koel nursery central at Margaret’s place, with not one but two young koels being fed by two separate pairs of host parents and, in one case, even by support staff. The first koel youngster to be noticed was being attended by a hard-pressed pair of magpie-larks or peewees. This species is one very commonly selected by koels to play foster parents to their egg and chick, and they often struggle to keep up the supply of food to a foster-child which will grow much bigger than they are. However, in this case the parents had help in the form of a figbird which was seen to fly in offering fruit to the ravenous youngster.

Striking markings of the young koel

Great work by Margaret to capture on camera this act of generosity, empathy or was it exasperation? It is interesting to speculate what motivates an “outsider” (ie neither a parent or foster parent) to chip in and help feed a young cuckoo, but it is not uncommon. The incessant cheeping of the young bird might be a sufficient stimulant, from which of course it benefits even if the helper does not.

A few days later this youngster had moved on but a new one had appeared, this time being fed by a pair of blue-faced honeyeaters – presumably these were its foster-parents and not another set of helpers. Margaret got several great shots of the young koel (nicknamed Fatty) showing its striking markings.

A day or two later she got this equally great shot of an adult male koel which dropped in as if to make sure the foster parents were performing their role to the required standard. 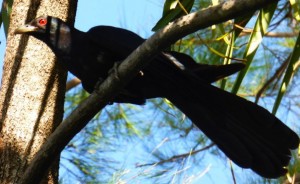 Is that my child? Male koel drops by.

Whether or not he was the biological father can only be guessed at but in any case he was not seen to play any part in feeding the youngster, though there have been records of female koels helping to feed their adopted-out young once they have left the nest.

Meanwhile out at Balgal Denise, walking across the apparently undisturbed leaf litter in her front yard, noticed a dead bar-shouldered dove on the ground, while its companion continued to feed nearby. Only closer inspection revealed the coils of a water python (Liasis fuscus) wrapped around the body. This was in mid-afternoon, an unusual time for the snake to be out hunting, and Denise was able to watch as it continued to coil itself around the dove and drag it under the leaf litter, where it once again became invisible. Water pythons are considered mostly nocturnal but are described as “opportunistic feeders” so presumably this one wasn’t going to pass up the opportunity for a daytime snack when the dove disturbed its slumber. 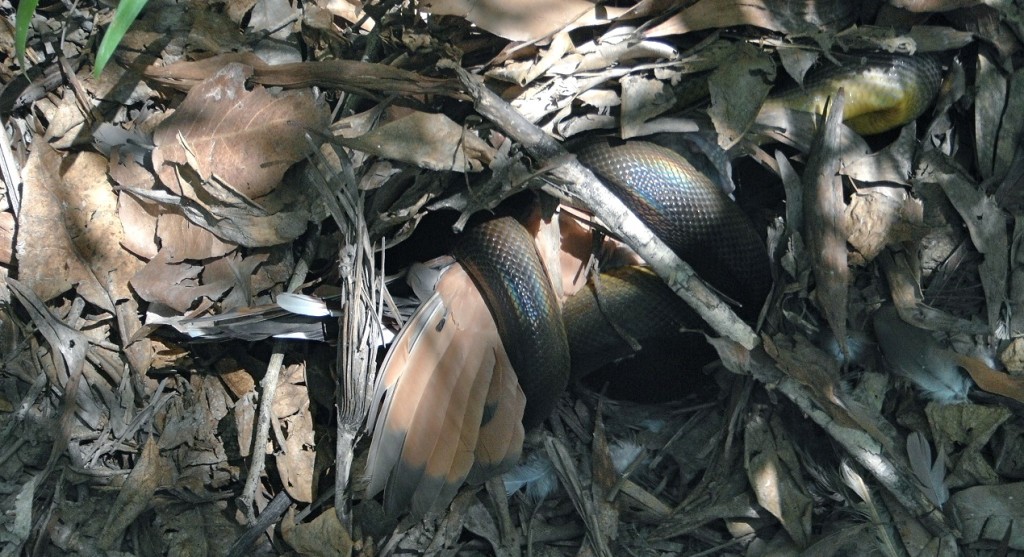 One small step for a dove, one juicy snack for a python. Photo Denise S.