Welcome to our end-of year update and what turns out to be the 99th post on this blog so we can start 2016 with post #100! (This figure does not include all the field trip and other event announcements that are deleted when no longer relevant)

Pigeon counts 1. Our planned November field trip to join BirdLife members for their Mission Beach pigeon count only attracted a few of us, but fortunately there were plenty of others to enable a successful count. You can read the write-up in our separate post, which includes accounts of a short walk on the Kennedy Bay track, and a very instructive few hours at Ninney Rise, both of which took place on the following day (Sunday). Read about it here.

Pigeons counts 2. I was fortunate to have a place on the Marine Parks vessel for the November count of the North Brook Island colony. It was great to see the enthusiasm and skill of some of the younger and newer counters – these are just the people we need to keep the counts going for the next half century. As always it was a beautiful day and  a successful count, yielding a final total of 22,172. This figure was nearly 3000 up on the October total, and the December count, just completed, came in at 25,523. This is still about 10,000 short of the totals that had become the norm before Yasi but, given the low point of 5,311 recorded in the first season after the cyclone, these numbers are certainly encouraging. 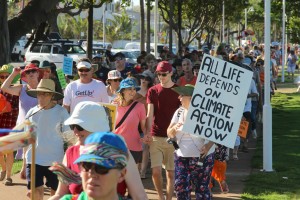 It was good to see our members attending the People’s Climate March at the end of November, immediately preceding the Paris meeting COP21. The NQCC website and facebook page have plenty of photos of the march and rally which followed. This event was of course repeated around the world from capital cities to tiny islands and remote villages in an attempt to urge our leaders to produce a ‘real deal’ in Paris that will make a difference. And it has.The challenge now will be to keep that momentum going and maintain the pressure on our leaders and governments, to meet the Paris targets and better them! If you want to read more about the Paris agreement, and what it might mean, here are links to a few articles: The Greens, The Climate Council, The Guardian 1 and The Guardian 2. I’m sure you can find plenty more. You will also hear plenty of negative comments – “won’t work”, “not enough”, “too late” – but negativity is a certain killer. What we need most is hope, positivity and determination to make it work and to make our efforts and targets stronger and better. The global organisation 350.org is one of many international groups already on the case. 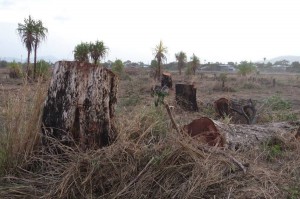 Graveyard of trees at Mundy Creek.

Mundy Creek: those who responded to the appeal to sign a change.org petition to save a stand of over 40 native trees at Mundy Creek will have heard the bad news that the chainsaws moved in three weeks ago. This was despite the fact that when I visited the site in mid-November I was told by someone who appeared to be a senior employee that, although he could give no guarantees as to the future, “we won’t be touching any of that area as part of this stage.” My impression therefore was that they were safe for the time being, perhaps allowing time for negotiation – but within two weeks they were gone. This photo is one of many on the Mundy Creek group’s facebook page (note: you do not have to be on Facebook to view them). We are told that the pandanus will be removed and replanted, but all bar one of the big old bloodwoods and cloudy tea-trees and many smaller trees are gone. The one still standing will come down when the kite’s nest it contains is vacated. It is indeed a crying shame (in all senses of the word) that no effort was made by the developer to save even a little of this area, or just some of the most significant trees. I joined representatives of the Mundy Creek Natureway Regeneration Group at a meeting with Council last week to discuss this and other issues relating to this development.

Flying-foxes at Rowes Bay: The small colony of Black flying-foxes in the Rowes Bay mangroves has been temporarily enlarged, though not hugely, by a population of Little Reds. This stimulated an article in the paper with the customary alarmist headline, but credit to the paper for printing our response alongside a ‘bat-friendly’ file photo. We are still working with Council regarding design of interpretive signage and Rowes Bay would be an excellent site for such a sign. It’s a great place to spend  an hour or two in the early evening – as well as the bats there are bee-eaters and ibis coming in to roost, and the chance of a turtle popping its head up for a breather as it feeds in the shallow waters. If the tide is right walk through the mangrove cutting near the end of Ryan Street to watch the fly-out – around 7pm at present.

BREAKING NEWS!!  Abbott Point expansion gets the green light. The last thing we want or need for Christmas is more coal and a huge expansion of the Abbott Point terminal, but that is what federal Minister Greg Hunt has just crammed into our stockings. Read more here and sign up to Fight for the Reef if you want to be kept up to date..

The summer issue of Wildlife Australia is now out and as always contains a rich blend of images, articles, news and reviews from around the state and the nation. Unfortunately there has been a delay in updating the magazine website, but as soon as possible I will update this post so that non-subscribers can have a sneak preview and access a free download of one of the articles. Those receiving our email updates will have received the pdf copy of Keeping Faith, an article about the 50 years of pigeon counting on which the Townsville and Cassowary Coast/Hinchinbrook Branches collaborated.

Have a wonderful Christmas  and holiday period and don’t forget to watch out for wildlife! If you find any wildlife in distress please call our wonderful NQ Wildlife Carers (0414 717374) or the RSPCA (1300 ANIMAL) – or for crocs, cassowaries or marine strandings call the Wildlife Hotline 1300-130372