Obviously late November is a hard time for members to get away for a whole weekend – only 5 were able to join BirdLife members for the Mission Beach pied imperial-pigeon counts, and two of those were the organisers! Nonetheless there were around 20 participants which allowed for groups of between 3 and 5 to be located at 5 different beaches between South Mission and Kurrimine. 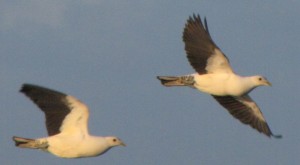 Prior to the count we all gathered at the C4 Information Centre for a screening of The Coming of the White Birds. Julia then led a discussion about how to encourage more people to take part in monitoring and reporting on mainland populations  and feeding grounds of these birds. Read more about this here. Trish then briefed us on the conduct of the afternoon’s count and allocated us to our locations. I opted for South Mission and joined three others all of whom had done these counts before. Between 4 and 6.30pm we recorded the numbers and flight direction of birds as they left the coast to fly to the islands – the vast majority almost certainly heading for North Brook. It was a very different experience from counting on the island, but with a strong onshore breeze cooling us as we looked out towards Dunk and the Family Islands, it was certainly a pleasant way to spend the late afternoon. Over a communal dinner at the Mission Beach Resort we compared notes, gaining the impression that numbers at each site had been quite high. This was borne out by the final total of 3736 (plus 1325 at Kurrimine), the highest recorded since 2009 – more details here. 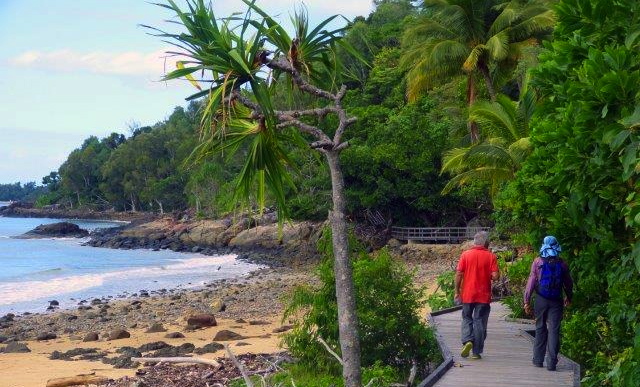 Before breakfast the next morning I had a beautiful (but very hot and sticky) walk along the first part of the Kennedy walking track from South Mission towards Tam O’Shanter Point. In the late 1980s our friends in the Cassowary Coast/Hinchinbrook Branch played a major part in the construction of this walking track, which links South Mission Beach with historic Kennedy Bay and the Hull River. Perhaps in 2016 we can arrange a Mission Beach weekend to explore this and other walks at a cooler and less busy time of year.

Later on Sunday I was able to attend a most interesting talk at Ninney Rise, the heritage listed home of artist and conservationist, John Busst, that sits atop the headland overlooking Bingil Bay. Our speaker was Rohan Lloyd, a history PhD student at JCU. As part of his studies Rohan has been researching John Busst’s part in the 1960s’ and 1970s’ fight to stop mining and oil-drilling on the Reef. John was also the founder and first president of the Innisfail WPSQ branch, the first to be established in the north. It was appropriate to be listening to Rohan’s findings at the very site where many of the early campaign meetings were held and strategies planned, as well as being in the company of the dedicated Friends of Ninney Rise (see above link) who have worked so hard to retain this house and its heritage. In the early evening I walked to the end of the beach at Bingil Bay to find the memorial plaque which was set in the rocks at Ninney Point following John’s untimely death in 1971. The words, written by his great friend and ally, poet and activist Judith Wright, pay tribute to Busst as an “artist and lover of beauty who fought that man and nature might survive.”