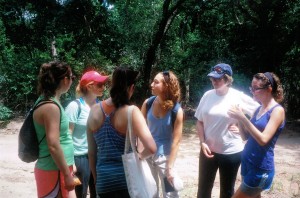 Our overseas helpers joined us from JCU. LD photo.

It was another hot morning for our Crystal Creek clean-up trip, but well done to the twenty people who gathered at our meeting place bright and early(ish) on the Sunday morning.  We were especially pleased to welcome six JCU students, all from the USA, interested in environmental protection and keen to see some of the more out-of–the way places during their time here. Also most welcome was David, the regional co-ordinator of Conservation Volunteers. Great to see the volunteering spirit alive and well.

Most of us are far more familiar with Crystal Creek west of the highway, where it provides refreshing swimming holes as it tumbles down the range and under the bridge on the Paluma road or forms the large pools at Paradise Lagoon. Now, driving along the dusty road, we followed its course towards the sea pulling up at the boat ramp where a few keen fishers had preceded us. 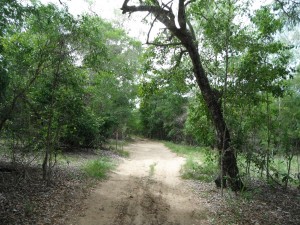 The sandy track behind the beach. DS photo.

To avoid taking too many cars along the narrowing road we car-pooled from here, driving on to rendez-vous with overnight campers, Jackie and Ken. Once on foot the litter clean-up got under way but there was still time to appreciate the quite dense vegetation and welcome shade on the track, and spot the odd bird. The heat probably kept the birds fairly quiet but among those heard and/or seen were figbirds, rainbow bee-eaters, white-browed robins, a white-throated gerygone and friarbirds (species uncertain). Larger birds were a blue-winged kookaburra, Torresian crow and, once on the beach, an osprey and brahminy kite were both spotted. 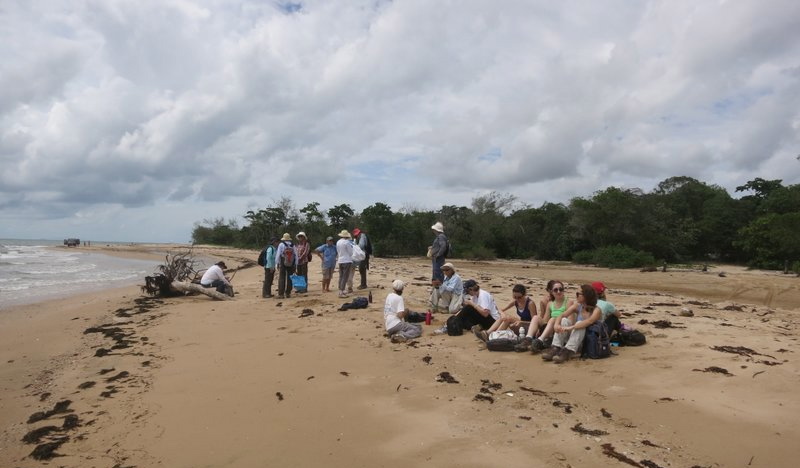 Large amounts of rubbish were collected along the high tide mark and around abandoned camp-sites tucked under the shoreline vegetation. Why, why, why is it so easy for people to transport all their food and paraphernalia on to a beach but apparently so difficult to take any of the debris away with them when they leave? As our bags began to overflow I concentrated on picking up harmful plastics first, and the rest if it could be squeezed in here and there – but, as Jackie said, rubbish collection becomes addictive and it is hard not to collect everything possible. It was a sterling effort on everyone’s behalf and full marks to all who brought bags and/or helped to fill them. Special thanks to Jackie and Ken who carted away and disposed of over 140kg in the back of their ute and Denise who did the same with probably another 10-20kg in the boot of her car. Jackie’s analysis of the items collected is below and makes intriguing, if depressing, reading. 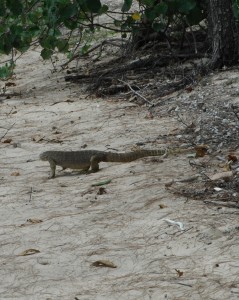 After a break to admire this gloriously empty beach, and the seascape beyond, we slowly headed back towards our cars. Walking south along the beach we had the benefit of the breeze and for a while some decent cloud protection. Passing a family group picnicking under the casuarinas we found they had been joined by a scavenging yellow-spotted goanna (Varanus panoptes). A shame it seemed so interested in the contents of one of their discarded drink cans.

Back at the boat ramp we took a short walk to where Crystal Creek finally empties itself into the ocean. Walking through the mangroves we noticed their diversity, in quite a small area, with species from four families present: Rhizophera, Bruguiera, Lumnitzera and Osbornea. The young and flexible enjoyed some joyful acrobatics on the inviting sandspit – see below – while those of ‘mature’ years were happy to watch from the dunes and try (unsuccessfully) to identify various waders. While contemplating one very large item of rubbish way beyond our capacity to remove – a semi-submerged landcruiser! – we were rewarded by the arrival of a pair of black-necked storks that flew in to feed in the shallows as the tide receded. Sometimes the best really is saved till last! (Not forgetting the yummy ice-creams from Frosty Mango of course!)

Thanks again to all who came, also to Peter and Julie for providing lifts; Peter, Sarah and Denise for photos; Denise for species lists and Jackie for rubbish analysis.

A word about microplastics. Microplastics are tiny particles of plastic, between 1-5mm derived from a variety of sources. High levels of microplastics are known to be present particularly in aquatic and marine environments where they persist for long periods and are commonly ingested or absorbed into the bodies and tissues of living organisms. They are found even in Antarctica and have been accumulating in our oceans for at least four decades. If you would like to know more, this link will take you to a number of research articles on the topic. Thanks to Jackie for this reference. 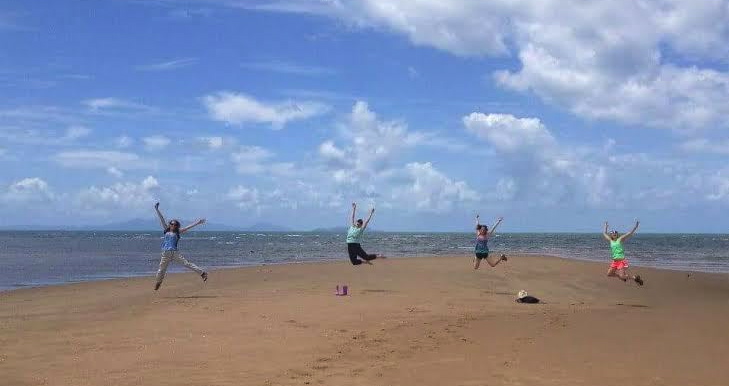