Welcome to autumn – why does it still feel like mid-summer! Let’s hope cooler temperatures and some late rain (without those cyclonic winds please) are on their way.

March field trip Sunday 22nd: Details of our March trip to the Crystal Creek area, east of the Bruce highway are now published on this blog. We plan to walk one of the lesser-known Castle Hill walks in April, and May will likely see a visit to either the Paluma Range or Jourama National Parks. If you loved our Geoffrey Bay walk last year, pencil in 30 August for another low tide walk, this time on the mainland.

Our February field trip report, “Even the birds were hot”,  is also published on the blog – you can read about our very warm but enjoyable morning here.

Welcome to our new members: In January an email went to non-members who have been on our mailing list for some time, inviting them to join the Branch. As a result I would like to welcome Chris and Selene, Clive and Linda, Jenny, Jennifer, Madge, and Richard to the Branch – as well as Barry, who joined us after contacting our Brisbane office. Your support is very welcome. 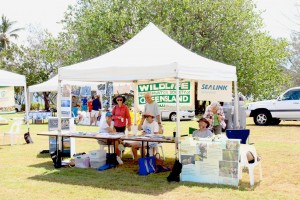 Celebrate the Sea Festival organised by NQ Dry Tropics was another hot morning and, thanks to support from Alison, Sandra and Mike, Wildlife Queensland was there for the first time. We shared a marquee with Magnetic Island National Park volunteers and used photos from last year’s magical mangrove cruise through Hinchinbrook Channel and our low tide walk at Geoffrey Bay to promote some of the wonders of the marine environment.

New government, new Minister: So, we have a new government and a new environment minister in Queensland. While we should be neither too optimistic nor too complacent, Steve Miles, Minister for Environment and Heritage Protection and Minister for National Parks and the Great Barrier Reef, has made a good start and a good impression in meetings with representatives of environment and conservation groups, including Wildlife Queensland. Other positive signs are the strong focus being placed on the Reef, signalled by its specific naming in the portfolio title, and the re-uniting of National Parks responsibilities with broader environmental issues under one Minister. It was highly inappropriate, and often confusing, to have National Parks thrown in with “Recreation, Sport and Racing” under the previous administration. 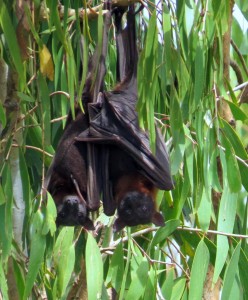 Still talking about flying foxes: The Branch is keen to continue its dialogue with the city council on management of flying fox colonies in the city and ways to increase community understanding, and reduce anxieties, about these hugely important native animals. A meeting between our Branch, NQ Wildlife Care and council staff is scheduled later this month.

In the meantime, some colonies seem to be changing and moving. At the last check the Palmetum colony was still present and quite large, while the small Rowes Bay colony emptied completely in February – but a few have now returned. Does anyone know how to find the colony in mangroves behind Oonoonba, or if it is still there? And there have been reports that colonies are re-establishing near the mouth of Ross River. If you have any observations about colonies or movements, do let us know.

Watching out for crocodiles: Did you see the crocodile that was patrolling local beaches recently? My grandsons were certainly thrilled to see it offshore at Pallarenda one day last month. Media alarms that its presence would wreck our tourism industry (quite the opposite I would have thought!) were over the top. Yes, we do have to take a sensible approach if there is a safety risk but we need to watch out for their safety as well as ours.

Finally, a word about fonts: You may have noticed that the text in recent Branch updates, including this one, and in one or two other short posts, has appeared in a larger font than the default setting. Some time ago I abandoned the default grey text colour in favour of the sharper black, but I have continued to use the smaller font setting for the longer posts, especially the trip reports. I would be interested in readers’ opinions – especially because I can’t know for certain how these fonts appear on your screens. Do you find the trip reports a little hard to read in the small font? Would you prefer all posts in the larger font? Does anyone find the larger font too big? Email us with your feedback.