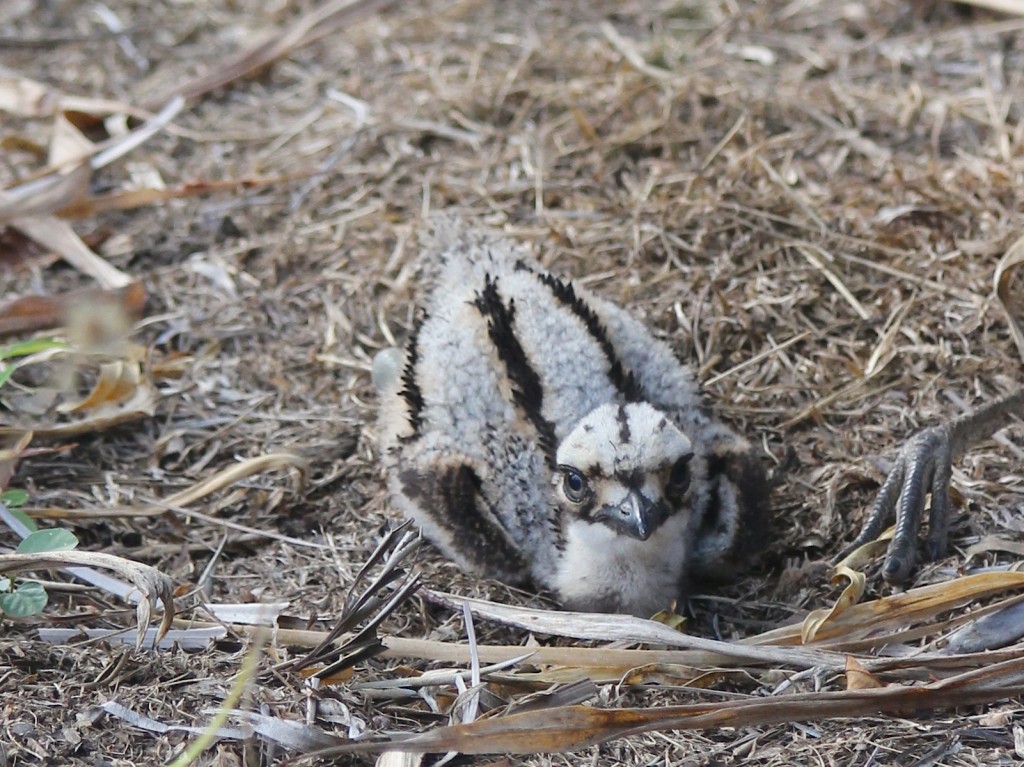 For approximately ten years two of our members have hosted a pair of stone-curlews first on their footpath and then in their Mundingburra backyard. For the first four or five years the birds remained on the footpath, before deciding that Jackie and Ken’s attractive backyard, with plenty of shade, leaf-litter and mulch from native trees and shrubs provided a better class of accommodation. At the approach of spring usually 2 eggs will appear in a shallow scrape in the ground which serves as a ‘nest’ and this marks the beginning of a stressful time for their human landlords. 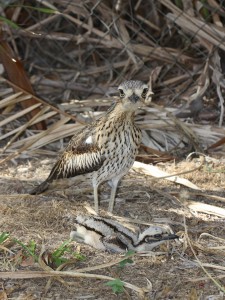 As a rule the eggs hatch successfully but the chicks don’t always stand an equal chance at survival. One year, within a week of hatching, one chick was double the size of its sibling and the smaller chick soon disappeared – survival of the fittest in operation.  Some causes of chick death are obvious. Jackie has found 1-month or 2-month-old chicks squashed on the road; on another occasion they rushed an almost full-grown chick with broken leg to the vet, who suspected a dog attack. Sadly euthanasia was the only humane action.

Stone-curlew chicks have native predators as well – snakes become active around the time the first chicks are hatching and they may also be prey for both diurnal and nocturnal raptors (owls). A pair of sea-eagles regularly nest a few streets away and Jackie has noticed kookaburras eyeing small chicks with interest although has not witnessed a kooka actually taking a chick – has anyone? Other causes are mysterious: one very wet summer a three-month old juvenile was found lying on its side, apparently too weak to sit upright and then disappeared. Could the weather have been a factor? On the other hand Laurie, whose Mt Low curlews featured in an earlier post, has frequently observed juvenile curlews adopting this posture without any visible signs of stress of illness. We have much to learn about these birds.

If neither chick survives the curlews will breed again. Jackie remembers a third attempt being made after two failures, but by this time the weather was so hot that neither of the eggs hatched despite the efforts of the parents to shield the nest for far longer than the usual incubation period of 3-4 weeks. Eventually the birds abandoned the nest and within days the eggs had disappeared – food for a possum or python perhaps? When the eggs do hatch successfully Jackie has noticed all traces of eggshell disappear immediately and this fits with reports that the adult birds eat the shell. As well as being a source of calcium, this practice helps to keep the nest area clean and may deter predators. 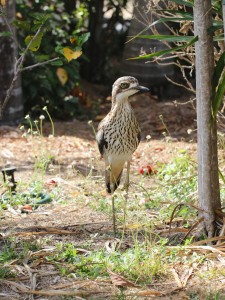 Movingly, what often alerts Jackie and Ken to the demise of a chick are the plaintive calls of the parents and what appears to be their frantic activity to find it. When last season’s surviving chick disappeared, at between 1 and 2 months of age, they watched the parents throughout the next day going round and round the house and garden, and up and down the road persistently calling. Of course there comes a time when well-grown youngsters – by this time indistinguishable from the adults – need a few hints from their parents to move out and move on. Then Jackie and Ken start to relax and appreciate just having Mum and Dad, with no kids to fret over.

Some observations of behaviour suggest an avian intelligence that we humans do not always acknowledge. Last summer, when the youngsters were still flightless but too big to squeeze through the wire mesh of the fence, one parent would fly over the gate and then, if the coast was clear, each young one would squeeze under the gate before the second parent would fly over to complete the family. This way no chick was left unattended by an adult yet the chicks could still be introduced into the wider world in relative safety. This persisted until the chicks were able to fly, even though they found it increasingly hard to fit under the gate! And have you ever thought about why curlews love fences, with birds often spaced at regular intervals close up against a fence? Could this practice protect the curlews, young or adult, from aerial attack? Kookaburras or hawks could well be deterred by the risk of injury or entanglement if they tried to seize a bird pressed up close to a wire fence.

The 2-week-old chick in these photographs was one of two which hatched in the first week of September – sadly its sibling had disappeared the previous day and two weeks later this one met a similar fate. Undaunted, the parents quickly produced two more eggs (precise date unknown as their human minders were away) which hatched overnight on 8/9 November. Within 36 hours they were no longer falling over their own toes or tipping forward onto their beaks but had mastered the art of bipedal walking. At the time of writing both are surviving and the said human minders are back on chick alert and hoping at least one will survive to adulthood.

Photos here were taken by another Mundingburra resident, Malcolm Tattersall, who kindly obliged when the curlews created a photo opportunity. Thanks Malcolm. 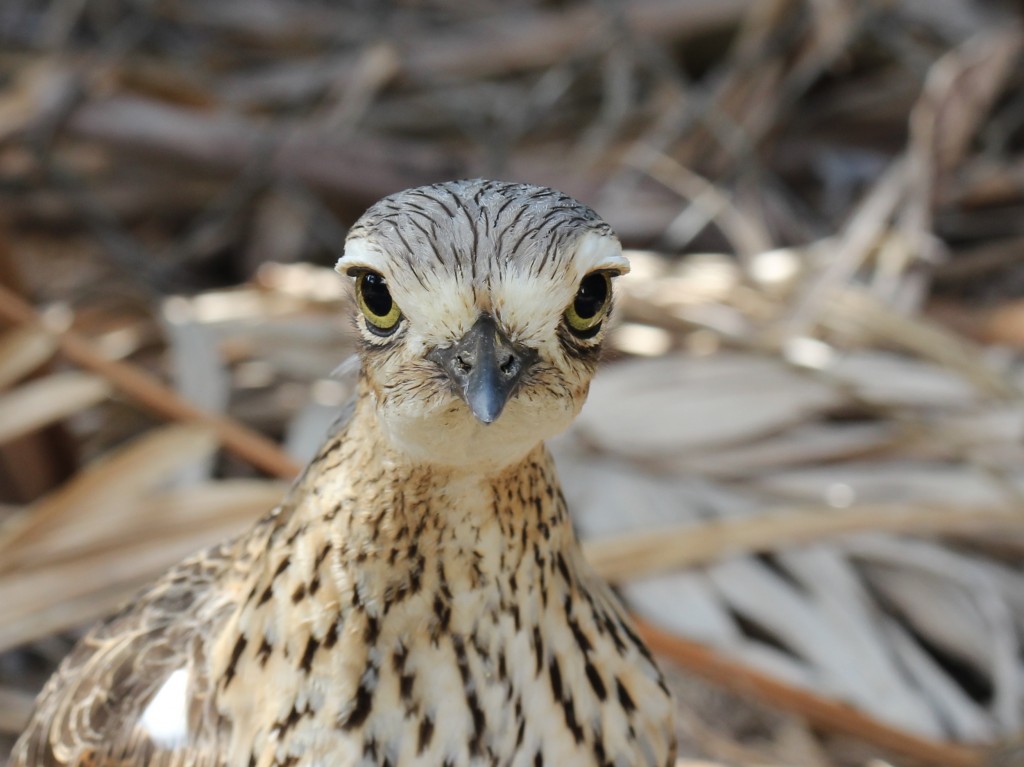