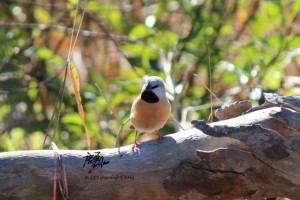 The handsome but endangered black-throated finch could disappear from our region. Photo Stanley Tang.

Did you know that one of the rarest birds in Australia is still managing to find a refuge in our local region – even as close to the city as Ross River Dam? The southern form of the striking Black-throated finch (Poephila cincta cincta) has recently been classified as endangered under the Commonwealth Environment Protection and Biodiversity Conservation Act 1999.

According to Tony Grice, Chair of the Recovery Team, the bird has disappeared from up to 80% of its former range and is now thought to be extinct in NSW and possibly even in southern Queensland. Like other finches, the bird is gregarious, living in open grassy woodlands dominated by Eucalyptus, Melaleuca and Acacia species, where it feeds on a variety of native grasses. Tony suggests that landscape changes resulting from agricultural and pastoral practices are partly responsible for the decline, while in their other main stronghold, in Central Queensland’s Galilee Basin, the birds face a major challenge from the massive expansion of coal-mining across their habitat. Here in the Townsville region urban expansion is the chief threat but birds are still found close to the city as well as at Ross River Dam, which Tony says is a favourite spot. 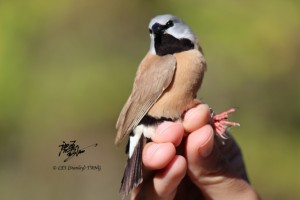 A bird in the hand – research is critical for the finch’s survival. Photo Stanley Tang.

Given their decline in other parts of the state it is very important to maintain our local population, and discover how best to halt, and then reverse, the downward trend.

How can you help? Use our link to the recovery team’s website, at left, to find more information and practical ways in which you might be able to help this delightful bird to survive, at least in and around our own city.