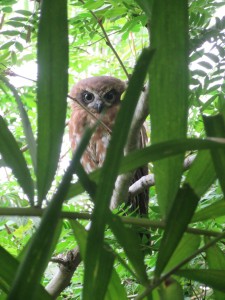 For three weeks in February we were honoured to have a Southern boobook (Ninox boobook) as a house and garden guest in Cranbrook.

I first flushed it from its roost in the fairly thick vegetation at the front of the house while I was filling birdbaths early in the morning. The bird flew just a couple of inches above my head and landed on the front stair rail. Since the back door was still locked and I couldn’t spend the rest of the day in my PJs at the bottom of the stairs I began playing a  game of grandmother’s footsteps, creeping up the stairs when the owl’s head was turned the other way and “freezing” when it snapped round again to fix me with its intimidating stare. I got within 3 steps before it flew back to its original perch – and a little later I got my first photos.

I was out all that day, but on return was delighted to see s/he was still present and, as evening approached, s/he started to spruce up ready for the night’s hunting. Judging by the scolding that was coming from the honeyeaters next day I was confident s/he was still in the garden, even if out of sight. By day 3, growing tired of the problem of appropriate pronouns, I made the arbitrary decision to assign the female gender. And this may be an unfeminist thought, but was it mere coincidence that she started to sample a bit of domesticity by trying out a few perches under the house?  One of these was on top of my car – fortunately, given the sharpness of her talons on the newish duco, she soon moved to a beam directly above it from where she could stare down the driveway. On other days she favoured the top of a wall beneath the front verandah, a beam at the side of the carport, a back wall behind the washing machine and, briefly, the lawnmower handle! 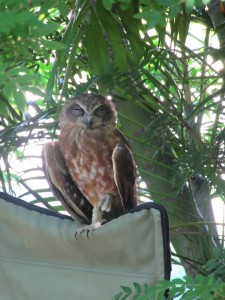 Asleep on the job?

She still kept in touch with her wild side by spending some days on an actual branch, though none of her perches were more than 2.5 metres off the ground. And then she discovered chairs – a couple of old camping chairs that I had positioned in different locations to give a good view of the birdbath I was monitoring for the Deakin and Griffith Universities study. When one Sunday I found her installed on the back of the chair that I had planned to use as my observation post I wondered whether she might do the survey for me – except for her tendency to fall asleep on the job, or the temptation to eat the data.

Every morning it was an excitement to look, very cautiously, for where she had decided to perch that day. Once very early I looked over the verandah to see her at the largest of my birdbaths before she flew off to one of her chair perches. She seemed surprisingly tolerant of our presence making me wonder if, at some point in her life, she had been in human care. She appeared disdainful of scolding honeyeaters although some days she would move from perch to perch even when there had been no obvious disturbance. She was always “home” before 6am and would leave around 7pm. Departure was preceded by preening of feathers and stretching of wings and often something that looked like a yawn, but probably wasn’t. Then she would bob up and down several times before taking flight 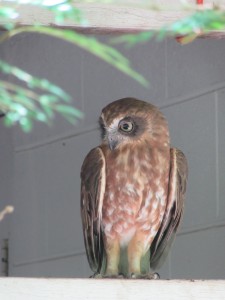 Showing her best side.

Sadly, there has been no sign of owl since one morning a week ago. I never expected her to stay forever, and was surprised she had stayed so long, but there is a worrying aspect to her absence. On the last morning her chosen perch was, bizarrely, the handle of an empty wheelbarrow under the front verandah – she had never perched there before and it struck me as ludicrously low. An hour or so later I tiptoed out onto the verandah to check on her – she was gone, but the wheelbarrow itself was tipped backwards so that it was resting on its handles. Now, a boobook apparently weighs somewhere in the range of 150-360 grams and there is no way she could have caused the wheelbarrow to tip. Yet it could not have tipped up like that without pressure being exerted on the handles or the rear of the barrow. So did a prowling cat, or more likely a dog, lunge at her, upset the wheelbarrow and give her the fright of her life? I hope it was nothing worse. I scoured the area for signs of feathers and found nothing which I took to be a good sign.

Having been so careful over those 3 weeks to plan our movements and activities so that we disturbed her as little as possible – taking circuitous routes to get to the laundry, leaving the car parked out in the driveway or only using the back stairs –  I wish now that I had broken that “Do not disturb”  rule on the last morning and encouraged her to find a safer perch. The garden seems strangely empty without her. 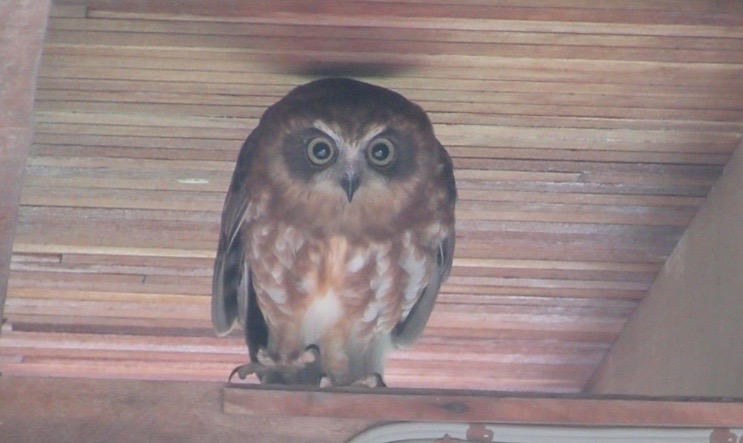 Guarding the house. Click on all photos to enlarge.