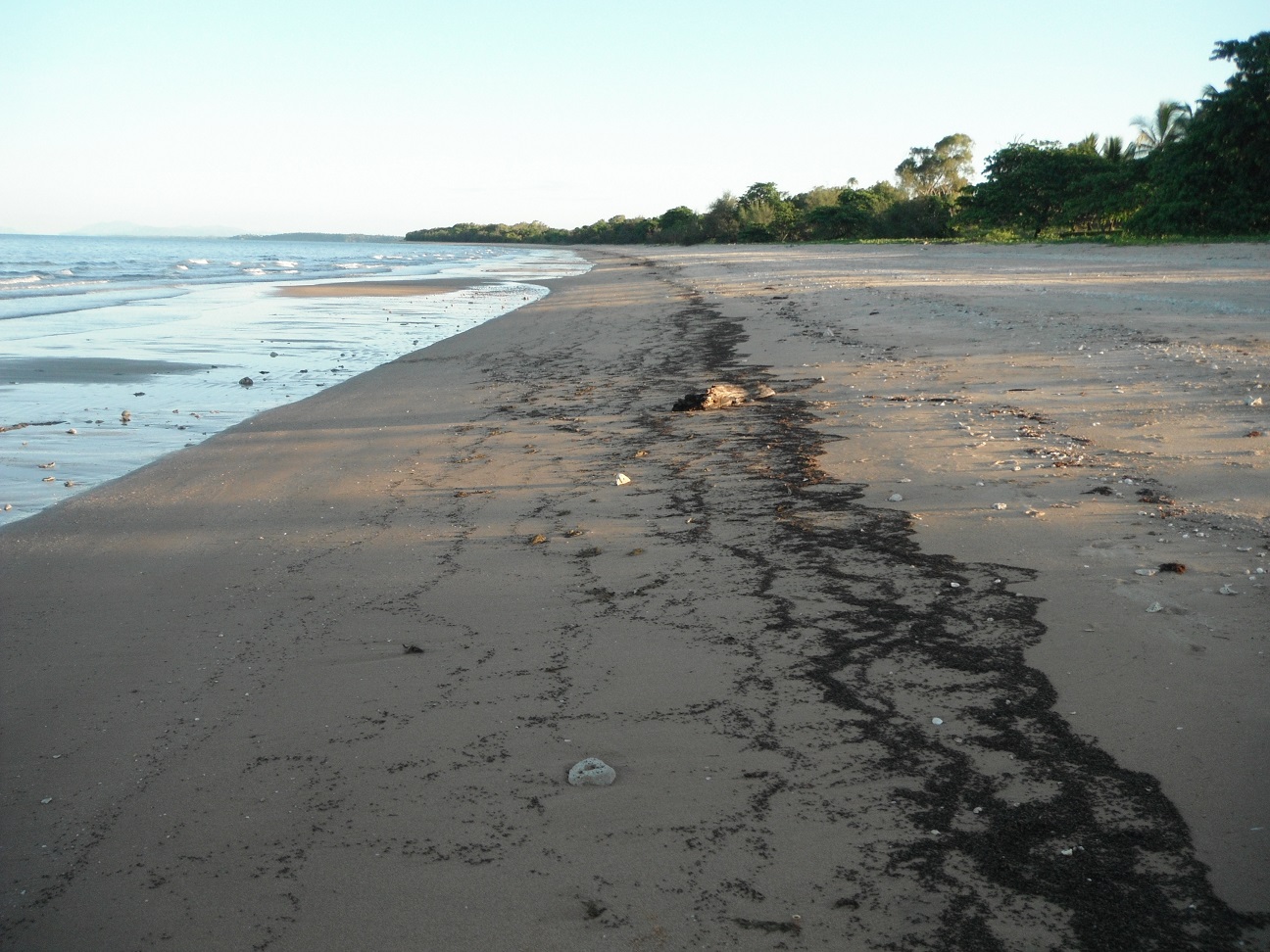 The fine black line stretches away to the south.

In mid-January our vice-president observed an unusual phenomenon on Balgal Beach: a dark line stretching for at least 2 kilometres along the full length of the beach south from the mouth of Rollingstone Creek. In the photo above it may resemble the usual washed up seaweed left by the outgoing tide, but further investigation showed this to be very different. It was composed of millions of dead flying ants; in some parts the line was 30cm wide and up to 10cm thick. While large numbers of dispersed flying ants may sometimes be observed on the surface of the sea, something on this scale is surely rare. 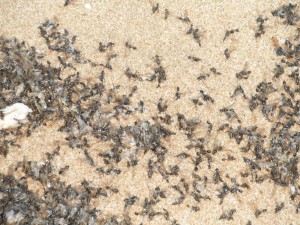 A close-up look at the as yet unidentified ants.

Denise took the photos in this post and collected some of the corpses for further examination by local ‘ant man’ Mike Downes. He explained that the stranding almost certainly resulted from a mass mating swarm event – which would normally occur over land but which presumably got blown out to sea while their collective minds were “on other things”. Females would probably have had enough energy to get back to land, but as the males typically die after mating they would have been too weak to make landfall, and were consequently washed up with the tide.

As this mass stranding was overwhelmingly of males (no females were among those collected) identification has not – so far – been possible.  Mike explained that identification keys for ants are based on workers, not males, and since they differ dramatically it is almost impossible to identify a species from male specimens alone. His attempts to contact a very experienced myrmecologist*, Alan Anderson, formerly with CSIRO, have so far been unsuccessful. However, based on matching the dead males with males of species in his collection, Mike reckons that the ants found on the beach were very probably male green ants (Oecophylla smaragdina) 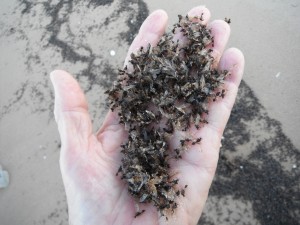 Ants in hand – all those collected were male.

Interestingly, a 2013 paper in the British Journal of Entomology and Natural History  (26, 2013, pp. 9-15) discussed a very similar observation more than 10 years earlier on the beaches of Normandy, France. (There is also a rather over-excited Youtube video showing a 2016 event in South Carolina). In the Normandy event millions of males and a few queens of the black pavement ant (Lasius niger L.) were washed up following a thunderstorm over the English Channel. While ants were in the overwhelming majority, 69 species of beetles and several species of other insects were also caught up in this catastrophe – which the author spent the next 10 years identifying. You can read the full article here if you wish. Among other things it introduced me to the term ‘aerial plankton’ –  and I realized how we rarely if ever stop to think of the millions of tiny life-forms (plant, fungal and animal) that float far above our heads on currents of air just as marine plankton floats on currents of the ocean. There’s a rather cute little video, and associated text, on the insect component of this “plankton” here.

This post will be updated if Mike is able to confirm this identification or if any other information comes to light. In the meantime, if anyone reading this has observed anything similar along our local beaches, or even more distant ones, do let us know!

STOP PRESS:  On 5/7/17 we received an email from a woman in the US who reported seeing a similar phenomenon on the beach at Seaside Park, New Jersey after a period of storms and strong winds. While she could not offer an identification she described them as uniformly black and similar to carpenter ants.

*For the word nerds: myrmecologist and myrmecology come from the Greek myrmex (ant) and logos (study).