Spring greetings to all our members and friends – it may not be officially spring yet but apart from the odd day or two we really seem to have skipped winter entirely this year. Sadly this is probably not something we should be celebrating.

SUNDAY AUGUST 21st: Our August field trip will be to Crystal Creek above Paradise lagoon. Bring walking shoes, hat, sunscreen, mossie repellant, water, snacks and lunch. Directions: Drive north from Townsville for approx 65km. After crossing Ollera Creek take the first turn left onto Barrett Road – the Paluma turn-off – then pull over to the side of the road and wait there. Meeting time is 9am – allow 50 minutes drive from Townsville.

SATURDAY SEPTEMBER 3rd is the next Mundy Creek Landcare Day, meeting at 4pm at the footbridge beyond the Castle Hill PCYC. 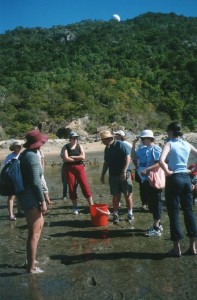 SUNDAY SEPTEMBER 18th: Shelly Cove field trip – exploring sandy shores. This will be an afternoon trip with marine biologist Dr. John Collins. We will meet at 1.45 at the far end of the old Pallarenda Quarantine Station picnic and BBQ area, and then walk along the headland track to Shelly Cove. Come earlier if you’d like to have a BYO picnic lunch beforehand.

FRIDAY-SUNDAY NOVEMBER 25-27th: The Australian Tropical Herbarium and the Wet Tropics Management Authority will again present their short course in rainforest plant identification at Paluma. Go to this site for more information or download the brochure here. [Links expired]

GARDEN BIRD SURVEY IN FULL SWING: Deakin University’s bird-bath and bird-feeding survey is into its third week and the co-ordinators have already received 10,000 surveys, with over 21,000 sightings, recording over 375 species! I have been surprised at the variety of birds visiting my main bird-bath in the late afternoon – so far eleven different species, of which five are honeyeaters and two are introduced. If you did not sign up to this survey, you may have another chance in November. Watch this space!

We had a big turn out for our MAGNETIC ISLAND FIELD TRIP and even though the butterflies were not up to expectations we had a varied and interesting day in superb weather. Read our trip report here and don’t forget to follow the link to the folder of additional photographs.

REEF CONVERSATION WITH STEVEN MILES: Queensland Minister for the Great Barrier Reef was in town last Thursday to deliver the Virginia Chadwick Memorial Lecture and to announce the findings of the independent Water Science Taskforce into what will be needed to halt and reverse declining water quality on the GBR – and so increase the reef’s resilience to climate change and other impacts. The Minister impressed the audience with his obvious concern for the future of the reef and assured us that the Queensland Government will accept in principle all the Taskforce recommendations. You can read a thoughtful analysis of the Taskforce report here.

FLYING-FOX FILES: The early morning Palmetum dispersals continue daily, with the action about to enter its third month. Black flying-fox females are now in the third trimester of pregnancy increasing the risk of stress-induced abortion, and in a few weeks time the first vulnerable babies will appear, which will also be at risk from disturbance. A recent conversation with Greg Bruce (Executive Manager of TCC’s Integrated Sustainability Services) indicated a weakening of previous assurances that dispersals would cease during the critical birthing period. Last week I joined wildlife carers Dominique and Jon in attending a Council committee meeting at which the current strategy was adopted. We remain very concerned and are awaiting receipt of further documents. We do not believe that these anti-bat actions are necessary in order to allow the fenced area to be re-opened since the risk to the public came from the rain trees not the bats – once the trees have been pruned and made safe, there can no longer be any reason to retain the fencing. The future of the signage project remains unclear.

EX-PAT MEMBERS COME NORTH: We all know that politicians and the retirees travel north in winter, but so do former Townsville Branch members. On our Magnetic Island trip it was a pleasure to catch up with former vice-president, Jo Wieneke, who is in the north for several weeks. A week later we were able to arrange lunch with Jo and our former president, and honorary life member,  George Heinsohn, here for a shorter visit. It is some years now since Jo moved to NSW, and even more years since George moved to Canberra but we hope these visits will continue for many more. Great to see you both!

WHERE ARE OUR WOODSWALLOWS? Jo Wieneke (see above), author of several books about north Queensland birds, made some interesting comments on “missing birds” she has noticed over the years. White-breasted wood-swallows – those grey and white birds with the endearing habit of snuggling up in groups of ten, twenty or more on exposed branches or overhead wires as evening approached – may be in trouble. In NSW some populations of the closely related dusky wood-swallow have declined by 30% in twelve years. Habitat loss and decline of insect prey caused by prolonged drought may be the cause. Have you noticed a decline in numbers of their white-breasted cousins (check here for photos) or do you still see them in the bush or gathering on overhead cables as you drive home from work in the late afternoon? Let us know!

By the same token, not so long ago any drive north to Ingham was punctuated by the sight of forest kingfishers which appeared like notes on a music score on the overhead wires beside the highway. No, they haven’t vanished completely but Jo believes they are far less numerous and I tend to agree. Again, let us know your own observations of these, or any other birds, if you notice changes in numbers or behaviour.

AND FINALLY … During his talk at ReefHQ Minister Steven Miles used a few quotes to illustrate and emphaise the points he was making. The first is from Sharan Burrow, former ACTU President and current General Secretary of the International Trade Union Confederation: There are no jobs on a dead planet. But perhaps the last word should go to “Her Deepness”, the great US marine biologist, ocean explorer and conservation campaigner, Sylvia Earle: Our past, our present and whatever remains of out future, absolutely depends on what we do now.