On 18th August the following disturbing account was posted by Innisfail’s Yvonne Cunningham on her facebook page and has also appeared on the community FB page, Innisfail News and Views. Cassowary Ruthie was well known to Yvonne and other residents of the area who had watched her progress since her appearance as a small chick late last year. 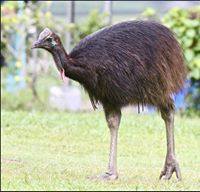 Ruthie (photographed by Yvonne earlier this year) – where is she now?

This afternoon a small group of Coquette Point residents pleaded with a Senior Wildlife Officer not to take the young cassowary Ruthie away but it was too late, cassowary Ruthie was shot with a tranquilliser gun and loaded into a steel box on the back of an EHP vehicle. Distressed, we stood as a group and watched as they took Ruthie away.

On Wednesday EHP received a complaint from one Coquette Point resident that a cassowary was attacking his dog. EHP officers investigated the complaint and immediately tried to catch the cassowary named Ruthie, but she escaped and ran off into the nearby Moresby Range National Park. A Mandubarra elder saw what was happening and approached the EHP officers; he advised them that the dog in question was often allowed to run out into the road and barked at people and cassowaries. He told the officers that cassowary Ruthie was not aggressive, however she naturally tried to defend herself from the barking dog [and] that it was the dog that needed to be controlled not the cassowary. In spite of having this information the EHP officers did not contact the Council Local Law Officer responsible for controlling dogs in the shire, instead they came again this afternoon with their cage and their gun and this time they shot Ruthie with the tranquilliser gun and took her away.

Mandubarra elders named the cassowary Ruthie to honour their friend Ruth Lipscombe who has done so much for conservation in the area. Mandubarra elders told me tonight that they are very upset that, in spite of their representation to the EHP officers, cassowary Ruthie was still taken away and nothing was done about the dog which continues to run onto the road and harass anyone walking on the road. Mandubarra want signs to be erected warning people not to bring dogs into cassowary habitat. People who own dogs must keep them within a fenced area and not leave them to roam, barking at people and animals. “It’s the dog that should have been taken away not the cassowary as it is the cassowary’s natural home”, Mandubarra elders told me.

Cassowaries are territorial animals and young cassowaries are taught by their dads where to find trees with fruits. When a cassowary is taken to a strange area, it has been shown again and again, that they often starve, they do not recognise the trees nor do they know where to gather food. That is, of course, if the cassowary survives the trauma of being shot by a tranquilliser gun and taken away in a closed steel box.

The cassowary is listed as vulnerable and is on the 20/20 list of endangered birds; they need all the help that the Queensland Department of Environment and Heritage Protection can give. It is not good enough when just one solitary person can make a vexatious complaint, have it taken at face value and acted on even when there is representation from local Aboriginal elders and from the majority of residents at Coquette Point telling them that the dog is the problem and not the cassowary. What hope is there for our endangered wildlife if this is the level of management being conducted by EHP?

The Townsville Branch of WQ is among those groups and individuals seeking answers to the many very concerning questions this event raises. Surely, the unnecessary removal of any native animal from its territory and habitat (with the associated trauma involved) cannot in any way be considered appropriate management or treatment, let alone when it involves one of our most endangered species.

If you would like to register your concern you can do so quickly and easily by using this link [Link expired] scroll down to section 6 (Complaint form) and complete the details in Parts 1 and 2 Or you can simply email the Minister [Link expired], Dr Steven Miles, asking him to please investigate and ensure this kind of action never happens again..