Welcome to the first full update for 2015 – hope we can provide plenty to interest you over the coming months. Don’t forget to click on photos to enlarge and on the links for additional information.

Who cares about sharks? Free public lecture: Weds 18th February 6.00 pm JCU Unravelling the past, understanding the future: the status and conservation of sharks and rays around Australia presented by Profs Nick Dulvy and Colin Simpfendorfer. Education Central (Building 134) – next to student union and refectory buildings.

Celebrate the Sea Festival : Sunday 1st March 8am-1pm, Robertson Park, Cape Pallarenda Rd. Organised by NQ Dry Tropics NRM, this annual event involves a beach and foreshore clean-up, presentations by marine scientists and environmental champions, activities for kids and adults, etc. A great way to get your hands dirty for the good of the environment (gloves provided) and generally enjoy a morning on our lovely NQ coast. 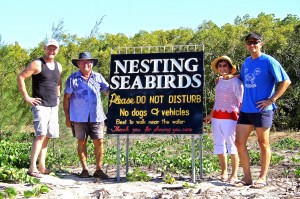 Protecting the Little Terns: In December we drew attention to a situation where off-road vehicles were threatening a nesting colony of endangered Little Terns on the Innisfail coast. Full credit must go to the Cassowary Coast Council for meeting with concerned locals, issuing a strongly worded media release and giving permission for locals to construct and erect a warning sign to advise all beach-goers how to behave in these sensitive areas. The sign was funded by the Coquette Point community and the Cassowary Coast Alliance. Thanks to Yvonne Cunningham for info and photo. Read more here.

A remarkable story on film: Also in our December update was news of a film project to document the history of the pied imperial-pigeon counts on North Brook island, in their 50th anniversary year. Interviews have been conducted with Margaret Thorsborne, who began the surveys with her husband Arthur in 1965, and filming has been done on two recent trips to the island. In recognition of the potential for this documentary to raise awareness about the importance of the counts, and the need for them to continue, the Branch has contributed $1000 to filming costs.  Meanwhile the total number of birds recorded on the December 2014 count was 18,056. This is slightly down on the previous year and still only half the numbers of the pre-Yasi years, but of course the forests which sustain them are still a long way from full recovery. Fluctuating numbers show the importance of continuing these counts in perpetuity. 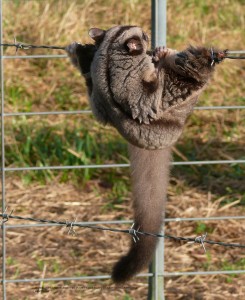 Glider habitat … going, going? In January a text message in the Townsville Bulletin alleged “surreptitious” clearing of mahogany glider habitat near Ollera Creek, north of Rollingstone, and the erection of barbed wire fencing. Barbed wire spells death to gliders as you can see from the photo of this one, which had two pouch young when found entangled on the fence, in the Cardwell-Tully area. Ollera Creek is the most southerly point where these highly endangered gliders have been recorded. Although unable to contact the person who wrote to the newspaper, our own investigations found evidence of clearing and thinning, as well as new barbed wire fencing, in the area. Further investigations are being made by appropriate staff within the Environment Dept.

The mouse that roared? The Cardwell-Hinchinbrook based organisation Alliance to Save Hinchinbrook Inc has filed a legal challenge to Federal Environment Minister Greg Hunt’s handling of the plan to dump dredge spoil from Abbot Point on the Caley Valley wetlands. The action will scrutinise the decisions that allowed fast-tracking of the assessments to ensure the Minister complies with the law. ASH alleges there were legal errors in the Minister’s decisions which included allowing assessment by preliminary documents (rather than a full EIS), and not requiring the public comment period to be longer than 10 working days. The Environment Defenders Office in Queensland is acting for ASH, which is also receiving financial support from GetUp. ASH has long experience in the impacts of dredge spoil disposal and protection of the Hinchinbrook Channel, a wetland within the GBRWHA, and believes all the wetlands in and adjacent to the GBRWHA must be fully protected. You can find more information about this case on the EDO Qld website.

Queen’s Gardens visitor: Last month a call came from TCC’s director of Sustainability Services, Greg Bruce, who had spotted an unusual bird darting about in the shady foliage not far from the bird aviaries in Queen’s Gardens. He immediately recognized it as one he had seen there very briefly some years before – a red-necked crake (click for photo). Several keen birders subsequently visited the gardens and confirmed Greg’s identification. This striking bird is more common further north and in Cairns will turn up in parks and gardens where there is water present, but it is far less common in Townsville. Is it still there? Might be worth a look!