Another year nearly over and so this is the last monthly update for 2014. After a lot of tweaking I am finally getting them to look how I would like here on the blog. Hopefully they are easier to read than a lengthy email. Let us know what you think – good or bad!

Cruising the Ross River: Even more successful than our trip in 2012, thirty members and friends climbed aboard for our end of year field trip on the Ross Dam and some of its tributary streams. A big total of 66 bird species was recorded. View some of the photographs and read more here …

Batty Hour: This extra item on our program, hosted jointly with NQ Wildlife Care, was also very well attended as 45 adults and children gathered to watch the flying fox fly-out spectacle from the river bank opposite the Palmetum. The best thing about this event was the large number of members of the public who attended (unattached to WQ or the Wildlife Carers) demonstrating a strong, and very positive, community interest in these animals. Read more here … 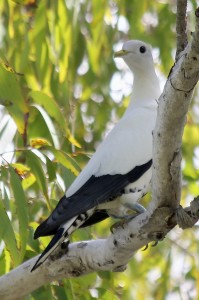 It’s PIP watching time:  It is good to see that the North Brook colony of pied imperial-pigeons, so devastated by Cyclone Yasi, continues to hold its own. Nearly 16,000 birds were recorded in October, rising to 19,340 last month. A final count for the season is scheduled for 18th December. 2015 will be the 50th year of this remarkable long-running and uninterrupted survey and a documentary on its history and value is in preparation. If you have these birds in your garden or suburb, especially if nesting, do report to PIPwatch.

More change for Margaret: Earlier this year we reported that Society patron, inspirational conservationist and friend, Margaret Thorsborne AO, had spent some time in hospital. After a difficult few months Margaret has now moved into the Rockingham care home in Cardwell. While this is a big change for her, especially following the loss of her beloved rainforest home in Yasi less than 4 years ago, she is having plenty of visitors and can go out without restriction. She retains her lively interest in wildife and environmental issues, people and events and has been participating in the above-mentioned documentary on the North Brook pigeon counts.

Coquettish cassowaries: Do take time to browse this blog compiled by another green stalwart, Yvonne Cunningham from Innisfail’s Coquette Point. Wonderful photos, notes and observations from an exciting stretch of coast though you may be shocked to see what is happening at a tern nesting site on Kurrimine Beach – our Branch is taking the suggested action, perhaps you can too? But you will also be introduced to the local cassowaries (all known by name) and some intriguing invertebrates. Read more here…

Looking back on 2014: It has been a busy, even hectic, year but there have been some great trips (think Hinchinbrook Channel, Geoffrey Bay, Under the Radar trail) and, dare I say it, small achievements (Ecofiesta, flying-fox advocacy, Batty Hour) despite the inevitable frustrations and disappointments.  We have been sad to say goodbye to five members who have moved interstate but happy to welcome nine new, or re-joined, members – always good to have a net gain! Meanwhile a special cheer to David, George, Graham, Jo, Steve, and Jan and Mark who loyally maintain their membership despite the tyranny of distance. And of course a big thank-you to all those within and beyond the Branch who have helped us throughout the year – way too many to mention individually but every one is greatly appreciated. 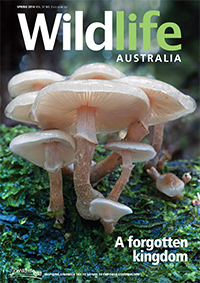 Still looking for Christmas presents (for yourself of others)? Why not take out a subscription ($47) to our great magazine Wildlife Australia?  Visit the AMCS shop for some novel ideas, or get your nearest and dearest a classy NQCC no-dumping T-shirt [Links expired]

The next full update will appear in late January or early February. But news of anything of immediate interest or needing urgent attention may be emailed before then. The fast-developing situation surrounding Abbot Point and the Caley Valley wetlands is one such situation – stay tuned!

Until next year, stay safe, watch out for wildlife, keep the bird-baths full, enjoy the flame trees, Cardwell lilies and other summer flowerings – and we’ll see you in 2015.