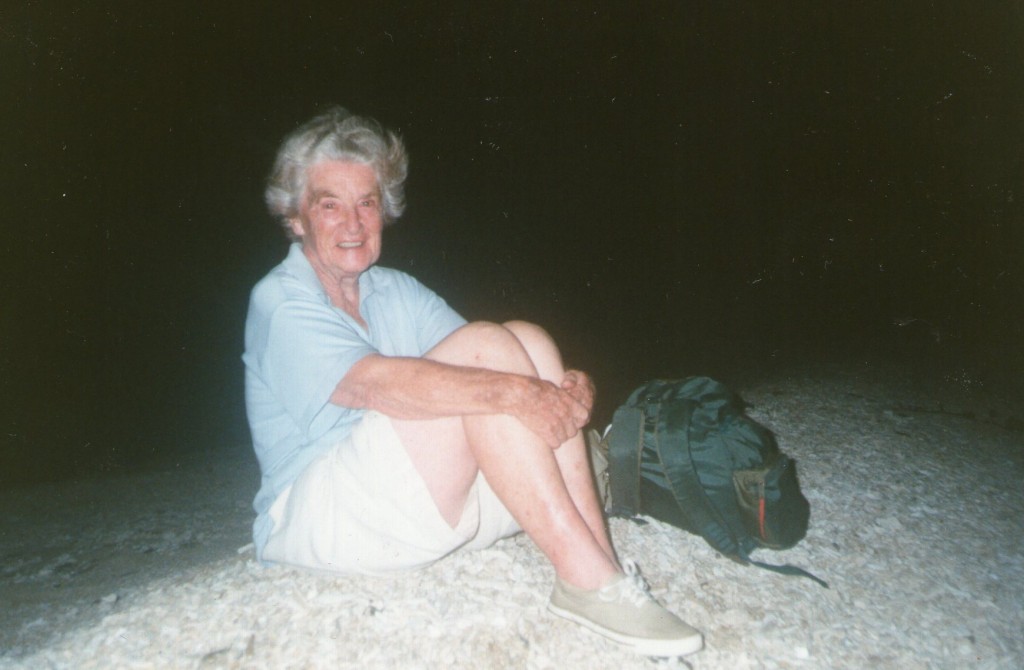 “Fresh as a daisy after a strenuous day walking the length of the island, noting and listing 28 species of birds and then scribing for the Torres Strait Pigeon count … Andree rests for a moment on the coral shingle.” Words and photo by Margaret Thorsborne.

One of the founding members of the Townsville Branch of WPSQ and an honorary life member of the Society, Andrée Griffin – social worker, birdwatcher extraordinaire, conservationist and friend – passed away peacefully on 29 October aged 95.

In the late 1960s Andrée was a pioneer of WPSQ in the north, being instrumental in founding the Townsville Branch in 1968 and serving on the committee for at least 15 years, for most of that time as its treasurer. Andrée’s passion was birds and her knowledge was truly encyclopaedic – a knowledge which she was only too happy to share with fellow members or indeed anyone who was keen to learn. For decades her comprehensive bird lists were an essential component of the monthly field trip reports published in our newsletter Brolga, and any excursion without Andrée’s presence was inevitably the poorer. She not only knew her birds, she had a profound understanding of the need to conserve their habitat and her contribution to the Branch’s conservation efforts was immeasurable.

Born and educated in England, Andrée was a qualified social worker and when she arrived in Townsville in the 1960s, to take up a position with what was then the Cootheringa Home for Crippled Children, she was only the second social worker to be appointed in the city. Her work often involved driving long distances across north and north-west Queensland to assist families of disabled children, giving her some happy opportunities to camp and birdwatch along the way! On retirement she moved permanently to Wirrawilla, her delightful cottage at Paluma, on the edge of the Mount Spec rainforest. Here satin and golden bowerbirds, rifle birds, whipbirds, yellow robins, Macleay’s honeyeaters and many others were literally at her doorstep. Her friend Jo Wieneke recalls that as many as 7 riflebirds would line up for the cubes of cheese which Andrée dispensed from her verandah. Despite the distance from Townsville Andrée rarely missed our monthly meetings even though it meant either a long drive home late at night or an overnight stay in town.

Her immense knowledge and experience were widely respected in birding circles and her precise notes and observations, as well as her contributions to the QOS journal, Sunbird, added much to the collective knowledge of north Queensland birds. In the 1980s she worked closely with fellow ornithologist Ray Swaby, painstakingly recording the bird calls of tropical Australia – a remarkable achievement. Many of these recordings can still be accessed on Birdlife Australia’s website – and, appropriately, some were played at the close of her funeral service, filling the chapel with birdsong.

Andrée was an intrepid and very independent traveller both in Australia and, when the opportunity arose, overseas, rarely missing the chance for an adventure. She had a strong sense of social justice, was generous, hospitable and known for her kindness and loyal friendship. She had a feisty nature, a great sense of humour and an engaging manner with children.

In August 1997 the WPSQ State Council awarded Andrée honorary life membership in recognition of her service to the Society and to conservation, and her contribution to our knowledge and understanding of birds and their environment. Her many friends will treasure her memory with respect, gratitude and great affection.