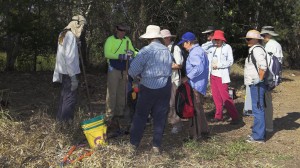 Greg (yellow shirt) explains some of the tasks to be done. Click to enlarge images.

Those of us who were able to get along to the Bush Garden on 20th October had a great time getting down and dirty alongside Greg Calvert and his team from Coastal Dry Tropics Landcare. Greg gave us a short rundown on tasks and safety procedures before taking us on a walk through the area known as Bazza Island where we would be working. This is usually separated from the river bank by a narrow channel of water but a combination of the dry season and the deliberate lowering of the water level, to aid current work on Aplin’s weir, has made it easily accessible.

The main tasks for the afternoon were the clearing of a new fire-break and raking of existing fire-breaks, attacking invasive vines and other weed species, weeding and watering around young trees, and rubbish collection. The brushcutters were wielded by the regular volunteers but raking of the fire-breaks was enthusiastically carried out by Julia and Trish, while Jackie and Ken set off (with considerable relish) to hack down and poison as much Leucaena as they could find. 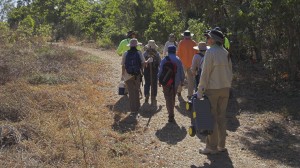 Armed and ready, we advance on the weeds.

A tip from Greg was to apply the herbicide (Vigilant) within 12 seconds of cutting the plant as it is within this period that it will be rapidly absorbed. Denise was spotted on hands and knees uprooting vines which were smothering smaller trees while Beth and I did the same in a different section. This was reasonably easy to do once the vines had been traced back to their roots. Later I found it satisfying to weed and de-vine some of the young trees planted by the Landcare group in previous wet seasons and managed to give some of them a drink.

A group of young blokes had established a camp in one area and were in occupation when we arrived. Not a problem in itself but unfortunately there was a large amount of rubbish (plastics, cans and bottles in particular) strewn around the area – which, as well as being unsightly, had the potential to pollute the river and harm wildlife. After a while the occupants took off for the river and in their absence we collected several large garbage bags full. Greg assured us he would be keeping an eye on this site and taking further action if the littering persisted. 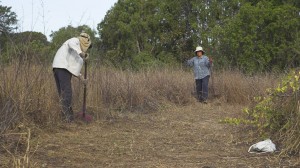 Women at work – Julia and Trish help clear the fire-breaks of debris.

After about two and a half hours we were all sweaty, dirty but satisfied with what we had achieved – and everyone seemed keen on the idea of repeating this activity at a later date.  Greg seemed happy to have us along and it was pleasing to meet Mick Brady who first encouraged us to link up with Landcare and who suggested the bush garden as a good place to start. There is a link to CDTL Inc on this site, as well as a previous post about their activities. Both include a calendar of their working bees which take place on most weekends at six different sites around town. You would be welcome at any of them.

Thanks to Uwe from CDTLI for providing some of the many photos he took during the afternoon. 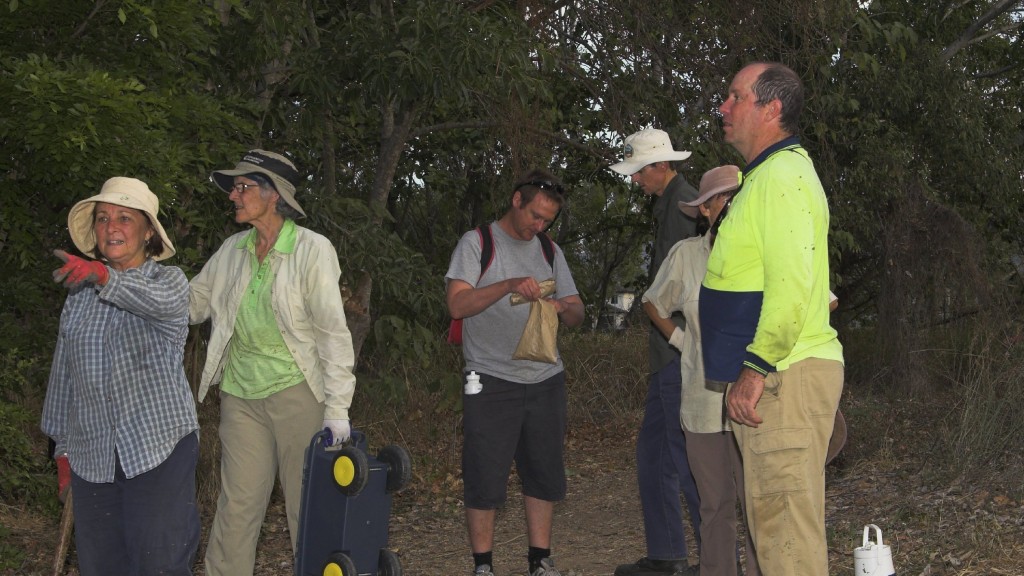 Hey, Jackie, I think you missed that bit of Leucaena! Greg decides to call it a day.