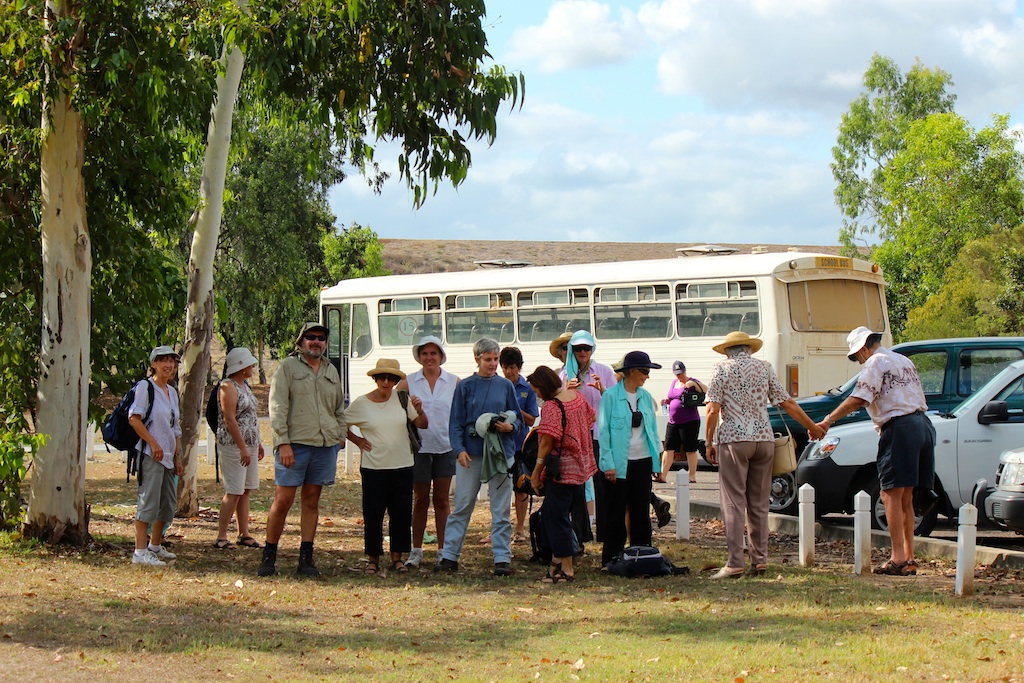 Happy smiles as members and friends assemble for the cruise. Photo Stanley Tang. NB Click on all images to enlarge.

What a great way to wrap up our renewed series of field trips for 2012 – a gentle morning cruise on Lake Ross, aka Ross River Dam, aboard the MV Kathleen Mary. A group of fifteen gathered at 8.15 before Pop and Heather Sullivan arrived with their bus to take us on the rough track around the dam wall to where the boat was moored. Despite the early heat the boat’s shady canopy and a gentle breeze kept us cool. Friendly company and a host of birds in beautiful surroundings combined to make it a perfect final excursion for the year. 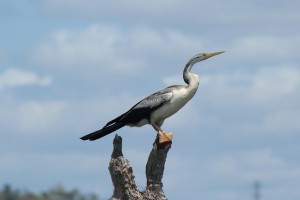 Heading out into the middle of the dam we wondered how many birds we would actually see, as there have not been too many visible from the dam wall in recent months. We were in for a pleasant surprise. A darter was fishing nearby and three species of cormorants were similarly occupied or gathered on rocks. As we approached Swan island, named for the birds which nest there, we could see a mixed gathering of black swans and pelicans circling around it. The swans predominated as at this time of year many pelicans would have left for their breeding and feeding grounds in Central Australia. Royal spoonbills and a glossy ibis patrolled the island’s shoreline and a pair of green pygmy geese swam nearby. I was excited to see a pair of great-crested grebes with their slim lines and elegant crests.

Despite plenty of seating on the boat few of us were sitting down – it was hard to resist standing at the rails to catch the best views of birds, and get that perfect shot of a pelican in flight or a darter glistening with water. Stanley, Julia, Trish, Marjory and Denise were all contributing to the mounting species list which Jackie patiently recorded on her iPhone.

After circling Swan Island and getting excellent close up views of many more birds we progressed down the shoreline, going up Stony Creek until a line of drowned tree trunks barred the way. Heather served our morning tea and Pop gave us some of the history of the Dam and the area surrounding it, or submerged under its waters. Eastern grey kangaroos were spotted on the bank here, and further up the creek a family of feral pigs came down to the water. Agile wallabies and the attractive Whiptail (Pretty-face) wallabies were seen resting in the shade. [Whiptail wallaby image lost in blog migration]

After a good two and a half hours of pure pleasure we were reluctantly returned to shore. First-timers were excited at the completely new perspective gained by actually being on the water rather than gazing at it from the dam wall. It is a beautiful stretch of water and the bird list of over 40 species gives an indication of its importance to wildlife.

Many thanks to Stanley for his great images and to all who helped spot and identify birds and other fauna, and to everyone for coming. Species list below courtesy of Jackie, Julia and Stanley. (Note: some imaged were lost from this post as a result of blog 2019 migration)