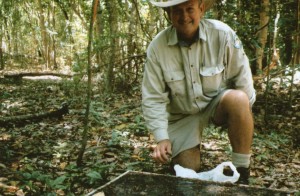 Dave collecting seeds dropped by the pigeons on North Brook for revegetation projects on the mainland. Photo Margaret Thorsborne.

Dave Green, National Parks ranger, par excellence, and long-time co-ordinator of the famous Pied Imperial-Pigeon monitoring surveys on North Brook Island, died peacefully at home on July 26th. A funeral service and celebration of his life of devotion to family, friends and the natural world he loved so dearly was held in Innisfail on 1st August.

Dave could rightly be described as  “nature’s gentleman” with a passionate belief in the importance of our national parks and the defence of our wildlife. Even to the last he was seeking to inspire young Parks rangers and fighting against threats he feared would destroy the integrity of our Parks. As regards the pigeon counts, it is impossible to overstate Dave’s contribution to the success and durability of what is the longest-running bird monitoring survey in Australia. Anyone fortunate enough to share the experience with him, whether once or many times, will never forget his absolute dedication to the task, his astonishing skills as a counter, his warm smile and gentle sense of humour – and the sense of joy and wonder that he brought to the day and to the task. For Dave it was never just a job, it was a labour of love.

The many farewell tributes from his friends and colleagues brought home what a truly special human being Dave was. All spoke inspiringly, none more so than Frank Manthey, co-founder of the Save the Bilby Fund, with whom many years ago Dave had founded the Rangers Association. At Dave’s request there were no flowers but donations may be made to: Save the Bilby, PO Box 271, Ipswich, Qld 4305 or online.

Our deepest sympathies and thoughts are with Dave’s wife Wendy, his mother and all of his family and close friends. In the minds and hearts of his fellow pigeon-counters Dave will surely always be standing tall on that lovely beach as the setting sun paints the sky and the pigeons stream home. 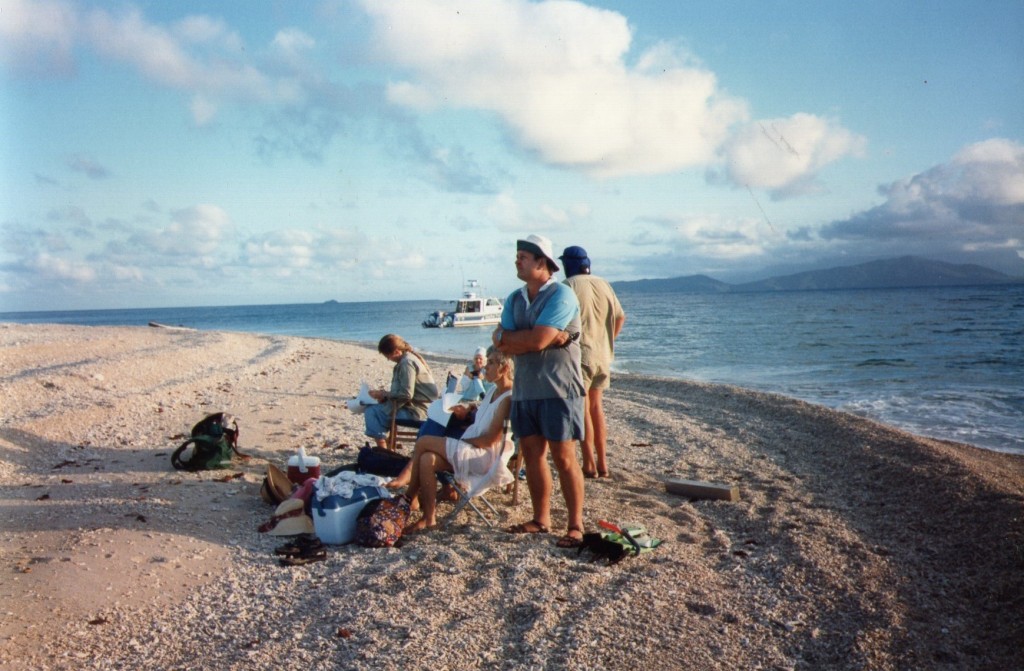 Dave (blue shirt) counts the pigeons as they return to their island roost. Photo Liz Downes.