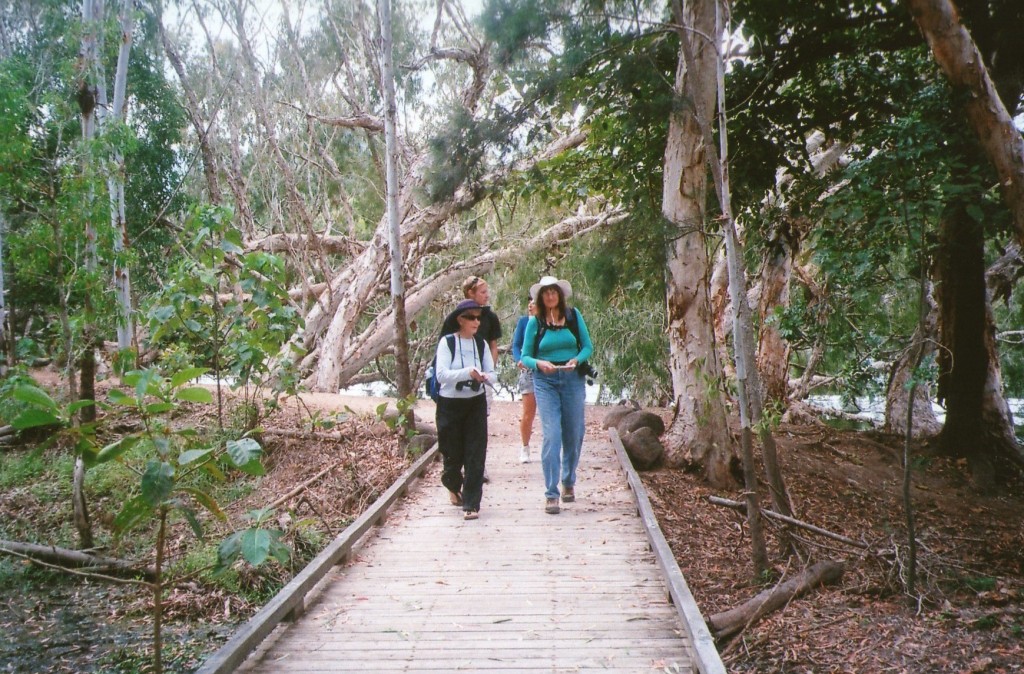 Members stroll along the Booroona Trail on the banks of the upper Ross River. Photo Liz Downes.

Even though it has been in existence for quite a number of years the Booroona walking trail seems to be a well-kept secret, as few of the 15 adults who turned up for the walk knew of it or had walked it before. It is something of an urban treasure, winding along close to the river for just over 2km and, among its other values, allowing us to see what ‘our river’ once looked like along much of its length before it was so relentlessly developed. Efforts by Landcare and other bodies to control weeds, preserve native vegetation, and revegetate degraded areas are to be commended as we now have a haven of natural bush close to the sprawling suburbs and busy road of the Upper Ross. Shady seats which overlook the river, a stretch of boardwalk and interpretive signs add interest and variety. 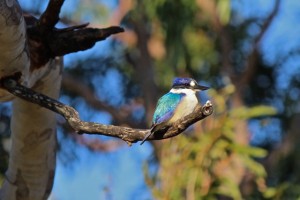 A Forest kingfisher (above) and a Little kingfisher were seen by the river. Photo courtesy of Stanley Tang.

We set off soon after 8am expecting to have completed the walk and be moving on to the Dam area by about 9.30am. What was I thinking? There were so many birds to be seen, nests to be examined, plants to be identified, spider webs and turtles to be investigated (especially by our young recruits Max and Ben) that even the advance-guard had only completed two-thirds of the walk downstream by that time, with the botanisers still way behind. With a water-skiing tournament about to start, we decided to return the way we had come without walking the last part of the trail.

Among the pleasures of the trail were the several species of honeyeaters feeding in the flowering melaleucas and callistemons. At least 2 pairs of brown-backed honeyeaters were busy with nests, and sunbirds, mistletoe birds, fantails and drongoes were all active. Krefft’s turtles bobbed their heads out of the river and a special treat was a  miniscule Little kingfisher perched above a small lagoon. The richly coloured pods of the peanut tree (Sterculia quadrifida) were scattered on the ground, their parent trees looking completely dead though obviously not so. Like the native kapok trees, which will soon be bursting into flower around the district, the peanut tree loses its leaves in winter and when flowering. Other trees included blue gum (Eucalyptus tereticornis), Moreton Bay ash (Corymbia tesselaris), a number of water-loving Leichhardt trees, (Nauclea orientalis), the river she-oak (Casuarina cunninghamania) and the Screw pine, Pandanus spiralis. But it is the paperbarks which dominate this walk, with some magnificent specimens of both the broad-leafed and fine-leafed forms of Melaleuca leucadendra, and the occasional Cloudy tea-tree, Melaleuca dealbata. Nanette has identified the tree in the last photo as possibly being Ficus destruens or Rusty fig. 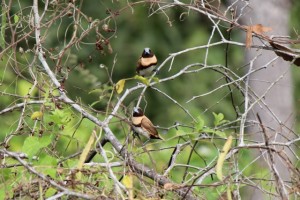 After returning to our cars we moved on to the borrow pits which lie just off the road close to the dam. The rather inappropriate term describes pits created when soil is excavated, or “borrowed”, for some purpose – in this case, dam wall construction. The resulting water-filled lagoons at this site provide an attractive wildlife habitat and are more extensive than they appear from the road. There have been considerable plantings of native, bird-attracting species as well as construction of several wildlife viewing shelters. Two of our group set off at a fast pace and followed the track right round the lagoons, while others contented themselves with a shorter walk. The rare black-throated finches which occur here were not seen, though the not dissimilar chestnut-breasted mannikins and double-barred finches were both recorded.  Some of us watched an osprey taking its catch of fish to a nest on a distant pylon, while others saw a whistling kite nest-building in a tree close to the dam.

It was probably ambitious to think we could cover the river, the dam and the borrow pits in one morning – but a return trip to spend more time at the last two locations sounds like a good idea. It was good to welcome no less than six new faces to our group – do please come again! Max and Ben came along at Grandma’s suggestion but thoroughly enjoyed themselves, and four-year-old Ben spent the afternoon studying my bird book.

Thanks to Julia Hazel for one of the photos and for help with the bird list (below) and to Stanley Tang for allowing use of his bird photos even though he couldn’t come on the trip.

NB (bp) indicates the bird was seen in the borrow pits viciniity, all others were seen along the river and riverbank. 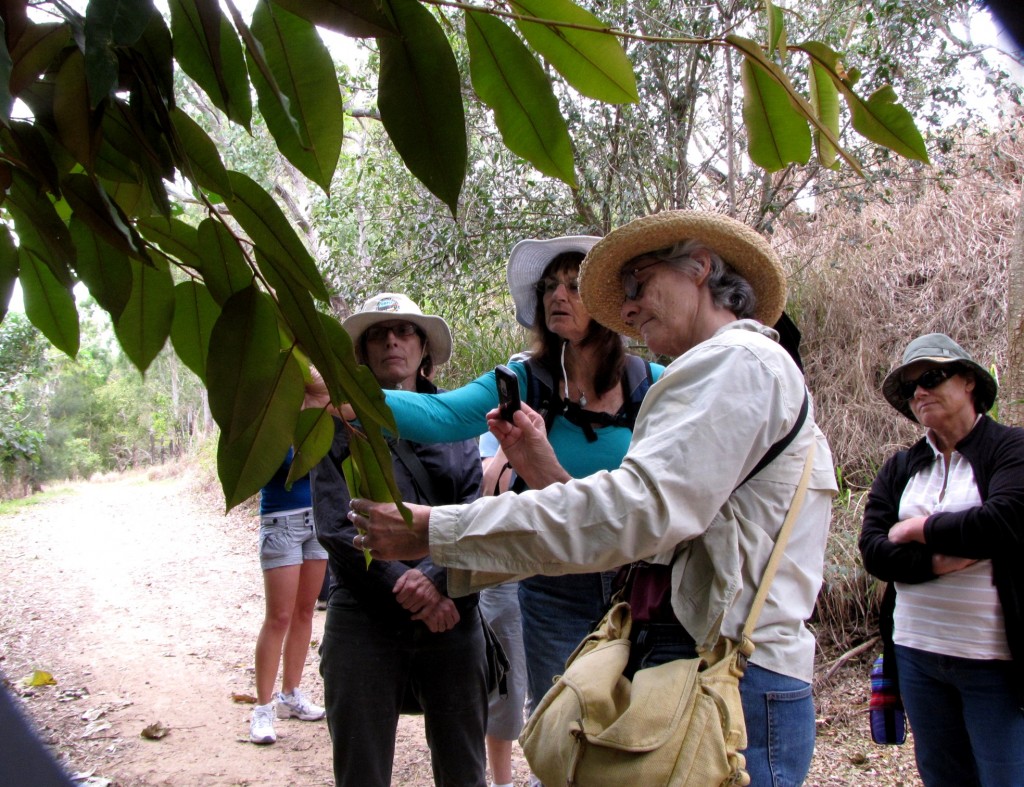 What tree is this? Beth puzzles over identification. Photo Julia Hazel.