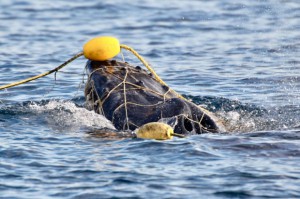 Last month we asked you to respond to the Australian Wildlife Society’s appeal calling on the Queensland government to ban the opera net traps that are drowning platypus and other species in our creeks and rivers.

This month we draw your attention to the harmful and often lethal devices which are taking a similar toll on marine wildlife and right now are entangling migrating whales. The (non-italicised) text below comes from a recent appeal from the Australian branch of the Humane Society International (HSI).

Last week, three whales were entangled in shark nets off Queensland’s beaches. On Tuesday morning, two were even entangled at different beaches at the same time.

Two of the three whales were entangled off Kirra beach on the Gold Coast, one on Tuesday and one on Friday. The third became entangled off Marcoola on the Sunshine Coast on Tuesday. All three struggled for hours before finally being freed.

The whale migration season only began in May and already these whales make five confirmed shark net entanglements this season. Being ensnared in shark nets is traumatic for these migrating whales, who are already exhausted from their journey. Although many are released alive, survival isn’t guaranteed. Many continue to drag sections of net and buoys, and can suffer laceration injuries in addition to the impacts of stress and physical exhaustion.

Sadly the migration season is far from over, with the last of the whales not leaving Australian waters until October/November. Every day these nets remain deployed off Queensland’s coast, the risk of more entanglements grows.

In 2020, Queensland’s Agriculture and Fisheries Minister Mark Furner was advised by the Shark Control Program’s Scientific Working Group to trial a removal of the shark nets during whale migration season—a recommendation that he has publicly stated he will not implement.

HSI is appealing for people to write to Minister Furner and Queensland’s Minister for Environment, Meaghan Scanlon, via this link.

Of course it is important to protect swimmers and surfers from shark attack as best as possible, but must this involve our marine wildlife in suffering and death? In 2019 a report commissioned by the Queensland Government identified and examined in detail a number of non-lethal measures, including drones and smart drumlines, which have been developed in recent years, many now commercially available. Surely by 2022 we should be moving away from the old methods and making use of new technology and latest research. By employing a combination of measures and devices capable of shark detection, deterrence and exclusion to suit different conditions along the Queensland coast, can we not take a smarter and better way to protect both humans and marine life?