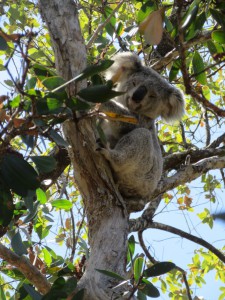 Magnetic Island Appeal: An inspired, and inspiring, attempt is being made to purchase a 5.33ha area of land on Magnetic Island’s west coast, known as Claude’s Block. If successful, this would see the land protected from development and managed for wildlife conservation. It contains key koala habitat. Back in 2005 the would-be purchaser, Magnetic Island Nature Care Association (MINCA), was able to acquire other land, adjacent to Claude’s Block, and has been successfully managing it as the Bolger Bay Conservation Park. It makes perfect sense to acquire this block, which would help to integrate the conservation park and adjacent nature refuges into a sizeable area of protected land which, among many benefits, will significantly increase habitat and protection for the island’s koala population.

The Townsville Branch has made a significant donation to this appeal and we urge our readers to give what support you can – donations are tax-deductible and will be refunded if the purchase does not go ahead.  For more information, maps and images, how to donate and answers to your questions go to this site.

The deadline for purchase is only days away – June 18th. If that is too soon for you to organise a donation, or if you prefer to make the donation in the coming financial year (ie after 30 June), you can still make a pledge by June 18. Let’s do this!!

Welcome to new members: In the last month we have received 4 new members: Angus, Heidi and Lindsay, and Jenny. Welcome aboard all of you – we are very pleased to have you and, to those who we haven’t met yet, we hope to meet up soon.

May Field Trip to Mission Beach: The report of last month’s trip to Mission Beach can be read here. It is a longer write-up than usual because we seemed to pack so much into the weekend, and even the passing showers (which fortunately passed over us very quickly) could not dampen the friendly atmosphere between members of our two Branches or our enjoyment of the Mission Beach environment and especially the beautiful Kennedy Track.

Animal Welfare submission: On 16 May we made a submission on the Queensland government’s review of the Animal Care and Protection Act (ACPA) which covers the interaction of people with animals, wild or captive, domestic pets, livestock etc. Naturally, we focussed on the welfare and humane treatment of wildlife, the recognition in law of animal sentience and the need to establish a duty of care in all our interactions with, and management of, native wildlife. We particularly called for the banning of cruel traps (like the notorious ‘Opera House’ yabby traps) and of activities and practices, like bow-hunting or pig hunting with dogs, that often inadvertently inflict cruel injuries or death to native animals. We also pointed to aspects of the Government’s own management policies which run counter to accepted welfare standards, eg their failure to ban dispersal of flying-fox colonies during the vulnerable birthing season or at times when the animals are already highly stressed by factors such as extreme heat or prolonged drought. We acknowledge the advice of our member, Dominique Thiriet, who is a wildlife carer with extensive knowledge of environmental and animal protection law.

‘Our Townsville’ Expo: The city council’s mammoth festival In Anderson Park, combining the traditional EcoFiesta and many other “expo-style” events, attracted a large crowd and hundreds of stalls and activities. We were pleased to have been allocated a spot, and even more pleased to be told that the proposed fees were waived! This allowed us to spend a bit more money on updating and expanding our display material and kids’ activities. We had good interest and a number of interesting conversations with those who visited our stall during the day and it was something of a bonus to have some real wildlife, in the form of a brush-tailed possum, vainly trying to sleep in the branches of a nearby tree! Thanks to Beth, Carole, Sandra and Pam for helping out on the stall – and especially to Pam for creating our own QR code, an easy way for people to access our website ‘on the spot’.

Alligator Creek campground: A reply to our letters questioning the permanent closure of the Alligator Creek campground at Mt Elliott was finally received from the Deputy Director-General of the Queensland Parks & Wildlife Service. Disappointingly, it offered little hope of a change of mind and mostly failed to address our concerns, or answer our questions, about the loss of this very long-established public amenity and the almost total lack of community consultation.

While feeling considerable despair at this, I wondered who else finds it disquieting that the old title of “Queensland Parks and Wildlife Service” has been expanded to include the words “and Partners” ?? Are these the “Partners” who are so keen to commercialise camping and trail-walking in our national parks – and charge costly fees for doing so? Does anyone in Government ever stop to reflect that these National Parks are public assets held in trust for us (the public) not for private enterprise to make large profits from them, and indeed that the purpose of Parks is not to make money for the Government (or anyone else) but to preserve and protect our beleaguered flora, fauna and ecosystems?

June Field Trip: Sunday 27th Tyto Wetlands: It was so good to meet up with our friends from the Cassowary Coast/Hinchinbrook Branch last month that we are doing it again!! By happy coincidence, just when we were undecided about where to go this month, we found their Branch was planning a Tyto trip.  So, with the planets aligning so conveniently, it makes perfect sense to join them. The arrangement is to meet in the carpark at 9am. Allow 80-90 minutes drive from Townsville. For those who don’t know them, the wetlands are on the southern edge of Ingham, and the turn-off (Cooper Street) to the carpark and Wetlands Information Centre is well marked with those brown and white signs, as you approach the town via the Bruce highway. What to bring: water, hat, mossie repellent, sunscreen, binoculars, cameras, snacks and probably lunch too.

Bush Garden Nursery on the move: For those of you who visit Landcare’s Bush Garden Nursery, please be aware that the Nursery is on the move from its Aitkenvale location, and will re-locate to the Council’s Sustainability Centre at Rowes Bay (by the big wind turbine). While this may be less convenient for some, hopefully everyone will still find the Nursery at its new site. The news is that the Nursery will close at its present site at close of business on Friday 18th June. No doubt the following week or two will be spent in undertaking the big move but check the CDTLI website for news about the re-opening: https://www.cdtli.org.au