Some of the group gather at Bingil Bay on Saturday. Photo Daryl Dickson.

It was in June 2016 that we last walked the Kennedy Track from South Mission Beach into Kennedy Bay but, such is its natural and historical appeal, it undoubtedly deserves more frequent visits. Making it even more special this year was the opportunity to join our friends from the local Cassowary Coast & Hinchinbrook Branch of the Society. 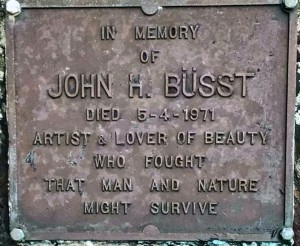 This was especially appreciated on Saturday afternoon when their Branch secretary, Suzie Smith, arranged a pre-walk meet-up at Bingil Bay. With raincoats and umbrellas at the ready (a few brief showers were passing through) we made a colourful throng walking to the northern end of the beach to pay our respects to one of the greats of our Society and of Queensland conservation, John Busst. John’s friend and comrade-in-arms, Judith Wright – the great Australian poet and WPSQ co-founder – composed the tribute on the memorial plaque (at left) which is embedded in the rocks at this site.

From the beach it was a short climb up to John’s former home, Ninney Rise, where Suzie outlined its history and how pivotal it became in those early days of campaigning to save both rainforests and reef. This heritage-listed house, owned by the Queensland government, is leased and managed by the volunteer group, Friends of Ninney Rise. It also houses the late Margaret Thorsborne’s extensive library. From there it was on to the delightful Bingil Bay Cafe where seventeen of us were accommodated on their side verandah for an excellent meal. The quality of the food, friendly service, and appealing ambience of the venue made a great end to the day.

Walkers assembled near the start of the track – with the sign documenting its history.  Photo Daryl Dickson.

Despite overnight rain the skies had brightened by the time members and friends from our two branches gathered at the South Mission boat ramp to start the walk. The photo above shows us a few hundred metres into the walk where our guide, Suzie, talked about the track’s construction in the 1980s, and the history of Kennedy’s 1848 landing at the bay which now bears his name. 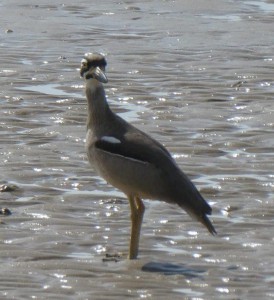 From there we moved off in a straggly line through a remnant strip of coastal rainforest before emerging onto the lovely sweep of Lugger Bay, with its lush fringe of melaleuca, calophyllum and acacia – the latter just coming into flower. This curving bay, with its fine sand of palest gold, is sheltered by the long arm and ‘clenched fist’ of Tam O’Shanter Head which reached out between us and our destination. Offshore lay Coonanglebah (Dunk Island) and its accompanying islets of Purtaboi, Mung-um-Gnackum, and Kumboola. As we progressed more would come into view – Timana, Bedarra, Toolgbar and others – forming the group known as the Family Islands. Watching us as we walked was a solitary beach stone-curlew; although they appear stouter and more robust than our familiar bush stone-curlews, they are classed as vulnerable in Queensland, with a decreasing population. After crossing Mije Creek we continued to walk behind the mangroves, with sand underfoot, until the track started its climb up to Morgan’s Lookout – a good place for a rest and a snack and to admire the views out to the islands which, from here on, unfolded at every turn. When the water is calmer this is a good place to spot turtles but, with mossies encouraged by recent showers, we did not linger too long! 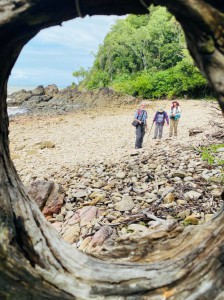 Progress slowed as the track climbed and descended around the rocky headland and across a cove of small rounded boulders, before the last descent led us to where we cut through into the northern end of Kennedy Bay itself. For most, especially those who were returning to Townsville that afternoon, this was the place to stop and rest and enjoy lunch. And perhaps also to imagine the scene of Kennedy’s party struggling to bring ashore their stores, equipment and livestock, which included 27 horses and 100 sheep. For three of us, however, the temptation to stride out towards the mouth of the Hull – some 2.5km distant – proved irresistible.

On such a day of racing clouds, white-capped waves and views south to the misty bulk of Hinchinbrook, it was a glorious walk. Once past the private land which fronts the northern end of the beach, the foreshore is backed by one of the few remaining stretches of intact lowland rainforest south of Cape York. My memories of walking through it 40 years ago (when access was only possible by water) are of its richness, diversity and  beauty. Thankfully, with national park status granted in 1991, this forest remains a sanctuary for cassowaries – and much else – but there was not time to explore it on this occasion. The beach at Kennedy Bay has been said to provide a lesson in ocean seed dispersal and indeed the sand exposed by the receding tide was strewn with mangrove propagules, seeds, and seed cases as well as fallen flowers and leaves. Reaching the Hull, with the tide not quite at the turn, we could see the exposed sandbanks across its mouth which – with Aboriginal guidance – had allowed Kennedy to make his “escape” southwards from the Bay, after nearly two weeks of failing to penetrate the forest and swamps immediately to the west. 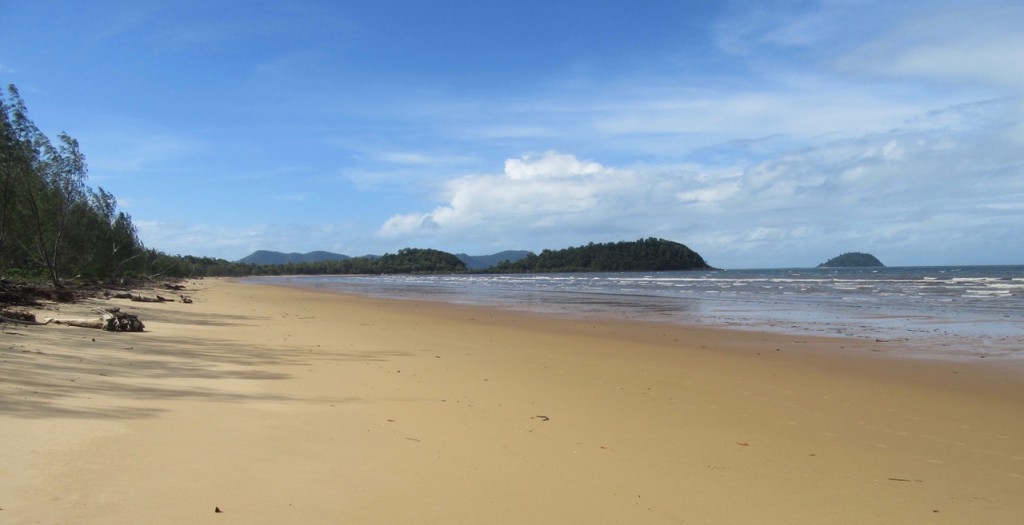 Looking back towards Tam O’Shanter Head from the walk to the Hull River. Photo Liz D.

From a wildlife perspective birds were few: apart from the beach stone-curlew at Lugger Bay, a sea-eagle and osprey were seen above the forest at Kennedy Bay, while a lone sacred kingfisher uncharacteristically hopped about on the sand near the Hull. Malcolm did well to photograph the colourful isopod, Ligia sp.,(see below) which we had first noted in 2016, although Julia observed these specimens appeared smaller and more skittish than the ones seen five years ago. 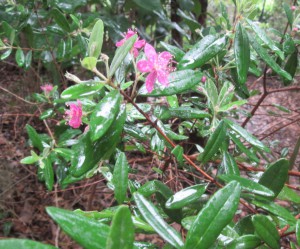 Botanists were busy with notes and cameras. My non-botanical brain was pleased to recognise the tropical speedwell we had seen on our Hawkings Point walk three weeks earlier, and to learn that the pretty pink beach myrtella (Lithomyrtus obtusa) was one of the plants collected by Joseph Banks and Daniel Solander in 1770. Margaret got a great photo of a Clerodendrum longiflorum in flower (below left) and a Premna serratifolia (or Creek premna) bore a substantial bunch of fruit in varying stages of ripeness. Later in the year parts of the track will be overhung by flowers of the golden or antler orchid, Dendrobium discolor. The weeders amongst us would have liked to spend a few hours (or weeks?) uprooting the snakeweed from one stretch of track – although the flowers did attract a blue tiger butterfly. 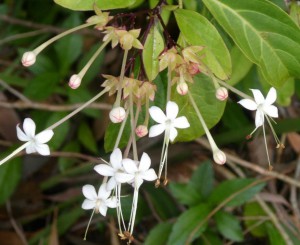 Those of us who had done the whole walk (roughly 13km return) struck a heavy-ish shower as we trekked back across Lugger Bay and were glad not to be doing the drive home until Monday! From later reports it seems everyone enjoyed the weekend, with some pleased to discover a walk they had not done before and which they plan to repeat in the future. Thanks go to all who came for your good company and for sharing your photographs and knowledge. Special thanks to Suzie for giving us her time and for arranging our Saturday afternoon ‘program’ and our very convivial evening meal. These branch links are important and such joint activities keep them strong.

This report is already longer than most but I would encourage you to read Malcolm’s write-up on his Green Path blog (click here) with some lovely landscape photos, and for good measure I have included, with permission, two of the photos he has since published on iNaturalist. Do click to enlarge and see the full detail. As always, please ask permission if you wish to re-use any photos published here, or on other people’s blogs. 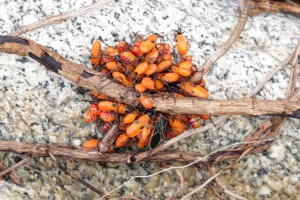 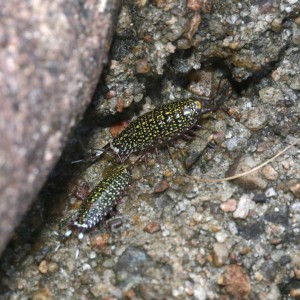