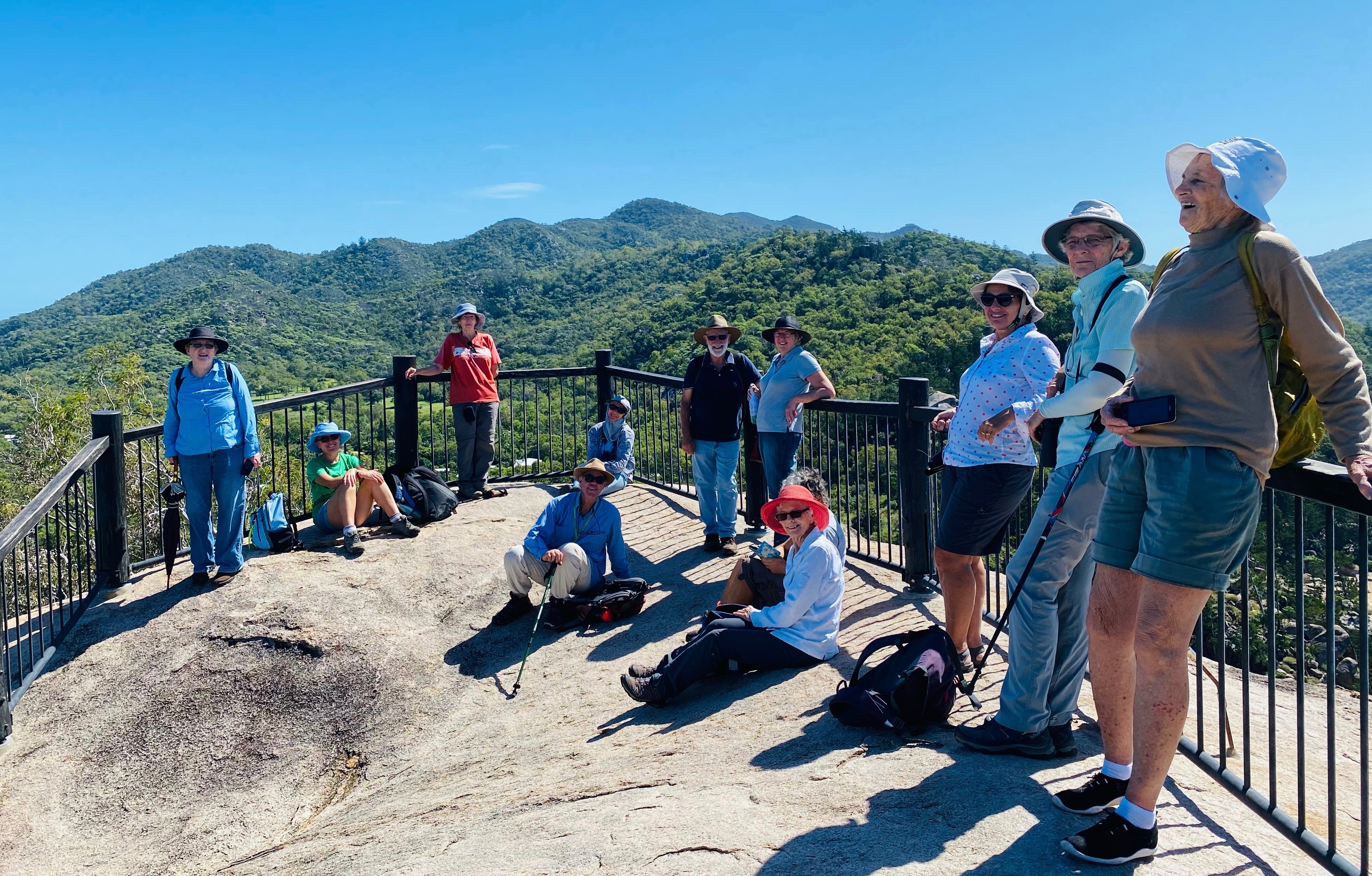 Smiles all round after reaching the summit of Hawkings Point. Photo Ishara Udawela.

Because of the late rain in April, our field trip was postponed for a week and as a result we had perfect weather for our first ‘overseas trip’ since the pandemic (can we describe Townsville and Magnetic Island as being in a covid-free bubble?).

As we made our way down Ross Creek we could hardly miss the smell of cattle incarcerated in the live-export ship in the port (from which, it later transpired, not only the cattle wished to escape). More welcome were the welcome swallows which accompanied us until we passed the breakwater where an unidentified tern was fishing. No turtles or dolphin were seen. We had ten people on the ferry and another three were set to meet us over there, ready for our ascent of the Hawkings Point track on the eastern headland of Picnic Bay. There was enough breeze to give the water a sparkle without threatening to dislodge hats and our rendez-vous with those on the island went ahead almost without a hitch, even if more aligned with “island time'” than with AEST. 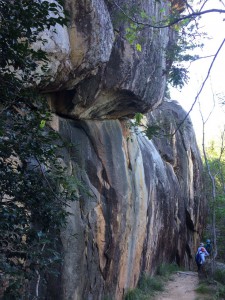 It was 10am by the time we set out on the climb and, while the sign at the start advised us that we should be able to complete the walk in one hour, we knew we would take at least two! There are always so many reasons to stop (and not only for a rest) and examine plants, small invertebrates or lizards; to listen for an elusive bird call or just enjoy our surroundings. It was good to hear the joyful call of a pied currawong as we set out, one of the island’s signatory birds and sounds.

Like so much of the island’s landscape this track is a blend of drama and delicacy. The drama comes within a few minutes of walking as a massive granite wall rears up on the left, and from the stunning views that are glimpsed between hoop pines and giant boulders. The delicacy can be found in the tiny purple flowers of the tropical speedwell (Evolvulus alsinoides), an even tinier spider in her carefully crafted web, or the scent of wattle drifting from Acacia leptostachyia, which was just emerging into flower, even though it seemed way too early. (To my surprise I had found these trees in full flower on the JCU campus in late April).

The spider was later identified by Malcolm as Gasteracantha sacerdotalis, and of the two ‘hoppers’ which Margaret photographed, sharing a meal together, he also identified one as a young giant grasshopper Valanga irregularis, while the other was an unnamed cricket. 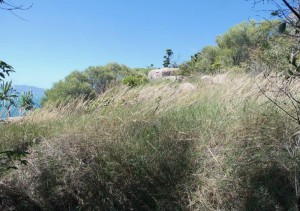 Onward and upward we found more plants to look at, including geebung (Persoonia falcata) – whose seeds, Beth explained, are notoriously hard to germinate – and a red-flowering native passion-fruit (Passiflora aurantia) scrambling over the boulders. As the track ascended there were views down to Rocky and Geoffrey Bays and a stand of porcupine grass (Triodia stenostachya) was blowing its flowering heads on the exposed hill-slope.

From the top we had 360 degree eagle-eyed views of the island, Cape Cleveland, our city and its backdrop and the coast stretching north – and found yet another interesting plant which had the “planties” puzzled. Thanks to the excellent website Some Plants of Magnetic Island (details below), Heidi found this attractive but prickly shrub was a Pittosporum (P. spinescens), and was displaying the fruit which inspires its common name, wallaby apple. 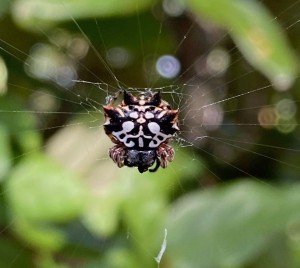 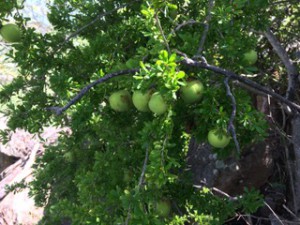 Descent was quicker than the climb up, even if the knees of some of us found it rather more taxing! A few metres beyond where the track ended and the road began, Beth spotted two vigorous specimens of Barleria lupulina (aka hophead barleria or Philippine violet). This is an invasive weed with the potential to cause serious environmental damage as it can form dense thorny thickets and overwhelm native species. It would be terrible if this spread into the National Park so, with a few willing hands, two vigorous specimens were uprooted and taken away by Lindsay and Heidi for destruction.  Having performed at least one good deed against one bad weed (sorry!) we made our way along Picnic Street, where blue-winged kookaburras were in full cackle, and lorikeets in full flight, while a small colony of black flying-foxes was remaining quietly unobtrusive in a stand of paperbarks. At the beach we headed towards the shade of the large figs and casuarinas to enjoy our lunch. 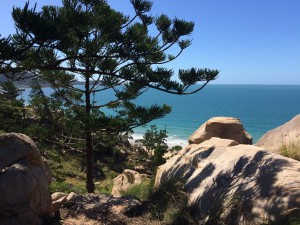 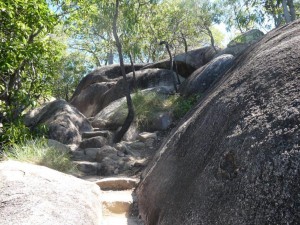 Two of us took a stroll to the far end of the beach (close up against the headland we had just climbed) where a brown booby flew off from one of the giant boulders and a white-bellied sea-eagle soared far overhead. Later, as we waited for the bus near the long jetty, an osprey circled so close I could see the individual feathers of its underside. Blessed!

Many thanks to Ishara, Lindsay and Margaret for their photos, to Beth for her botanical knowledge and to everyone for their good company. Thanks also to Heidi for reminding us of the late Donald Simpson’s website of the Island’s flora, which of course can also be useful for identifying many mainland plants. You can find it at: https://somemagneticislandplants.com.au and easily look up any of the plants mentioned above. Sadly, Donald passed away almost exactly a year ago but the website is still being maintained and added to by his nephew who is happy to hear from would-be contributors.

There were stunning views from the look-out. Photo, Lindsay Trott.